Another week with no discernible change to the BludgerTrack poll aggregate, outside of a further dip in Malcolm Turnbull’s net approval.

This week’s reading of BludgerTrack once again records next to no change whatsoever, with both Newspoll and Essential Research proving true to their recent form. The only perceptible shift is on personal ratings, thanks to Newspoll numbers which delivered Malcolm Turnbull the worst result of his prime ministership. Even here the change is limited to Turnbull’s net approval, with preferred prime minister essentially unchanged. 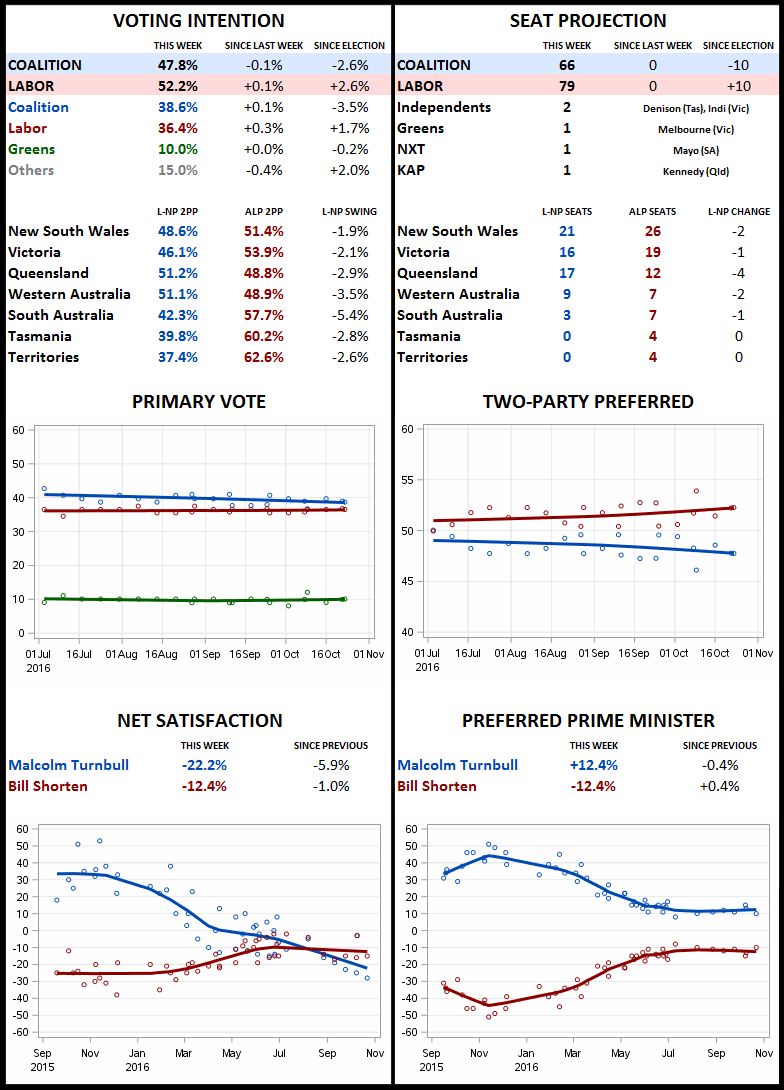 This week’s supplementary news bites all relate to the legal issues surrounding eligibility to sit in parliament, in each case involving minor party or independent MPs.

• After announcing he would resign from the Senate following the collapse of his housing construction group, Bob Day has indicated he might yet hang on if a deal for an investor to save the business comes through. However, authorities on such matters cited in media reports say the fact that his companies are in the hands of liquidators mean there is little chance of that happening. At the very least, Day is insisting on remaining in the Senate until the end of the year, saying in a statement that “marriage plebiscite legislation, ABCC and our other work is too important to Family First to have a vacant seat for even one day in November”. Fairfax reports that unions are “considering their options” with respect to a legal challenge to Day’s right to sit in the Senate given his financial position, but as Bernard Keane of Crikey explains, a court would need to determine Day was insolvent before section 44(iii) of the Constitution would have legal force.

• Western Australia’s One Nation Senator, Rod Culleton, has dodged one bullet after a court in New South Wales did not record a conviction against him after he pleaded guilty to larceny. This related to an incident in which he removed the keys from the ignition of a tow truck whose driver was attempting to repossess a car he was leasing and threw them into a ditch. He thus eludes, for now, the reach of section 44(ii), by which one may not a hold a seat if one is “convicted and is under sentence, or subject to be sentenced, for any offence punishable under the law of the Commonwealth or of a State by imprisonment for one year or longer”. However, two further obstacles lie ahead: a creditor’s petition that threatens him with bankruptcy, on which a court hearing is set for November 21; and another charge relating to an incident in which he surrounded a car being used by receivers foreclosing on his Western Australian rural property with hay bales to prevent them from leaving. This allegedly amounted to theft of the car, and requires him to face court in March.

• In the Northern Territory, the Electoral Commission has begun proceedings against the election of Yolngu leader Yingiya Mark Guyula, who won the seat of Nhulunbuy as an independent at the August 27 Northern Territory election from Labor deputy leader Lynne Walker by a margin of eight votes. It now emerges that Guyula was serving on the Milingimbi Community Advisory Board, for which he was paid all of $482 in allowances for attending four meetings. There does not appear to be much doubt that this is sufficient to trigger a prohibition on persons holding public office from running for election. The NTEC’s action comes after the Guyula’s difficulty was reported on a fortnight ago by the Northern Territory News. In the view of Ken Parish, a former Labor MP and now Darwin legal academic and stalwart of the Australian blogosphere (who signed Guyula’s statement of reply as a witness), the leak was almost certainly the work of Labor, which has a “distinctly inexperienced” front bench that “badly needs the services” of Walker. The most likely outcome would seem to be the voiding of the result and a by-election, at which Guyula would presumably be free to run if he divested himself of the position.

• Guyula’s difficulty relates to a section of the Northern Territory self-government act that echoes section 44(iv) of the Constitution, which applies to anyone who “holds any office of profit under the Crown, or any pension payable during the pleasure of the Crown out of any of the revenues of the Commonwealth”, other than ministers and military officers. This resulted in the voiding of the election of independent Phil Cleary at the Wills by-election of 1992 and Liberal member Jackie Kelly in the seat of Lindsay at the 1996 election, both of whom were subsequently re-elected. A parliamentary inquiry in 1998 recommended that this section of the Constitution be removed through a referendum on the basis that it was “uncertain and unfair” in the modern context, and that the relevant objectives could be better served through less restrictive measures determined by the parliament.

• Former Australian Electoral Commission official Michael Maley has made a submission to the parliamentary inquiry into the recent federal election, in which he suggests a disclosure scheme to handle another constitutional prohibition on election candidates: this one relating to foreign citizens or those “under any acknowledgement of allegiance, obedience or adherence to a foreign power”, as per section 44(i). This was used to overturn the election of One Nation’s Heather Hill to a Queensland Senate seat in 1998 on the grounds that she held dual citizenship. There were some who queried whether Tony Abbott had duly renounced his British citizenship when he first ran for parliament in 1994, or at any point thereafter. Maley argues that the status of citizenship is more difficult to determine that matters relating to solvency, convictions and the holding of public office, and that the best solution is to require candidates not born in Australia to provide “a complete statement of the facts on which he or she wished to rely to establish the absence of any relevant disqualification under section 44(i) of the Constitution, along with copies of any supporting documents providing evidence relevant to the issue”.