Last reading of the poll aggregate before we see the influence, if any, of today’s headlines about Hillary Clinton’s email server. Also featured: state level results and a national electoral college projection.

While you were asleep, a story you can read about in depth elsewhere shook, and then partly settled, in relation to a story about the FBI looking into some emails relating to the investigation into Hillary Clinton’s server. FBI sources have been dialling back the story since it was first retailed by Republican opportunists as a reopening of an investigation into Hillary Clinton, but the big question of the campaign now is the extent to which the flurry of confusing information relating to a sore spot for Clinton will damage her over the remaining eleven days of the campaign. When the story broke at 1pm US eastern daylight time, the Dow Jones industrial index dropped 0.52% immediately, and 0.81% over the course of an hour. As further detail about the story emerged, it rebounded to its present level around 0.43% lower than it had been at 1pm.

So with all that kept in mind, here’s my latest update to the presidential poll tracker, which now has Clinton at 49.4% and Trump at 42.7%, respectively up 0.2% and 0.6% on where they were when I last ran it last weekend. 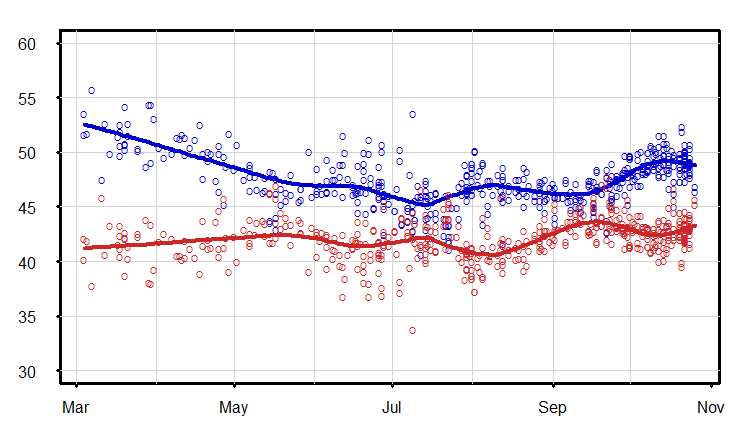 And here we have my all-new accounting of how things stand state by state. For each state with polling available, I have determined a “deviation” score based on aggregated results from state level polling, and how they have differed from the national trend. Each state poll’s deviation result is then aggregated into a state total, where the state polls get a weighting of two if they were from October and one if they were from September. Each state’s deviation score is then applied to the present national total. States with no polling available are identified as “safe” for one side or the other. From this I calculate 358 electoral college votes for Clinton and 171 for Trump, if no effort is made to take into account the peculiarities of Nebraska and Maine, or the independent challenge in Utah.