Not much happening on the poll aggregate this week, but lots of news to report on preselections and related party shenanigans.

I’ve been a bit tardy updating BludgerTrack this week, but as you can see below, you haven’t been missing much. The moral of the story is that a single Essential Research result is unlikely to change much under the new set-up, particularly when, as present, it accounts for 16 out of 20 available data points. Things may be different when, presumably, Newspoll comes along either tonight or tomorrow night. No new numbers this week on leadership ratings. Keep reading below the fold for a whole bunch of material on party games, and also note that there’s a separate post below this one for presidential election discussion. 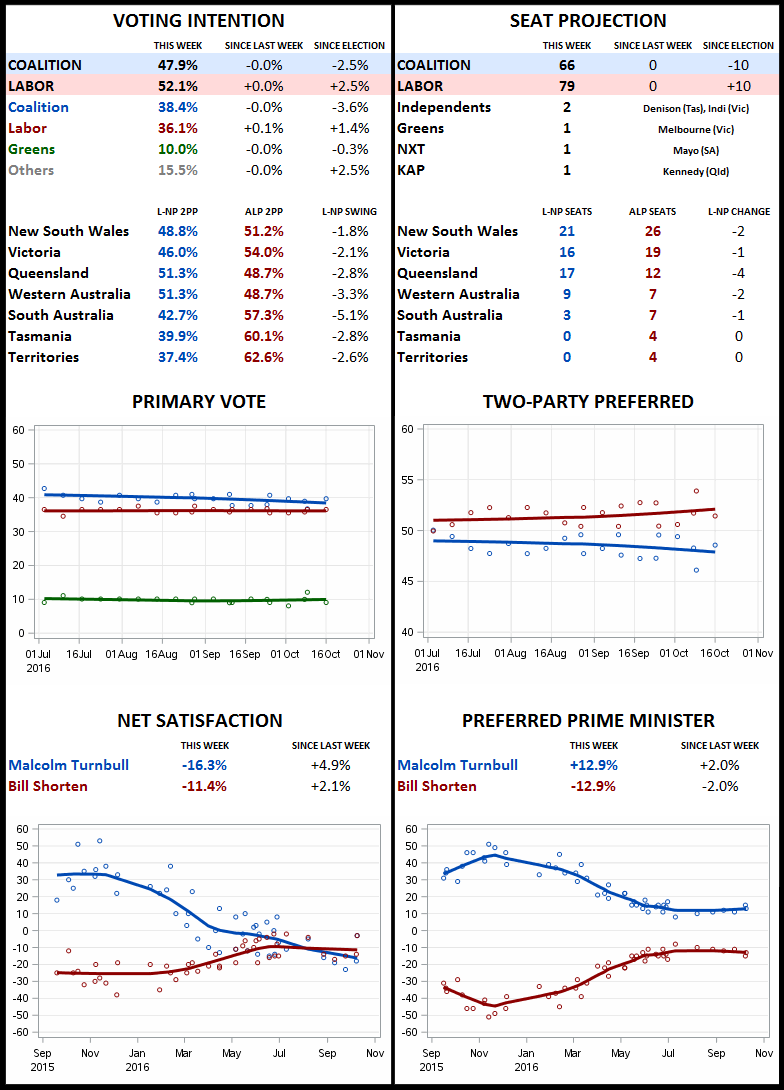 • The Victorian branch of the ALP last week signed off on Kimberley Kitching as Stephen Conroy’s Senate replacement, following the Right faction warlord’s surprise retirement announcement in mid-September. Kitching is a lawyer with Cornwall Stodart, and was formerly a Melbourne City councillor and general manager of the troubled Health Services Union. The royal commission into trade union corruption recommended charges be pursued against Kitching relating to allegations she completed tests for workplace entry permits on behalf of union organisers, but none have been forthcoming in the two years since. Kitching was effectively unopposed in the vote by the party’s Public Office Selection Committee, as factional arrangements reserve the seat for the Right. She had won the Right’s backing ahead of Diana Taylor, former Clayton Utz lawyer and a director at the Geelong Football Club, who had support from Richard Marles, federal front-bencher and member for Corio. According to the Herald Sun, other nominees included “Warrnambool city councillor Jacinta Ermacora, former state member for Benalla Denise Allan, Maribyrnong councillor Sarah Carter and 2010 Young Victorian of the Year Wesa Chau”.

Kitching and her husband, Andrew Landeryou – whose VexNews blog trod on many a toe until he retired it in 2013 out of deference to his wife’s political ambitions – are both close to Bill Shorten. Reports have identified widespread criticism of Shorten’s actions within the party from mostly unidentified sources, although Anthony Albanese declined an opportunity to endorse Kitching, saying her preselection was “a matter for the Victorian branch”. Albanese also said there was “a case for ensuring that members have votes in Senate pre-selections” – true of the his own branch in New South Wales, but not in Victoria. Sarah Martin of The Australian reports that a Left-sponsored motion at the Victorian party’s state conference next month will propose “giving members a greater say in Senate preselections”.

Labor sources quoted by Katherine Murphy of The Guardian claim Shorten’s backing for Kitching was motivated by a desire to harness HSU numbers as he seeks to plug the gap in his factional network created by Conroy’s departure. James Campbell of the Herald Sun earlier reported that the sudden exit of Conroy was causing ructions in the Right, owing to a power-sharing agreement that had been reached between the secretaries of the Australian Workers Union, National Union of Workers, Transport Workers Union and the power bloc associated with state MP Adem Somyurek. It was understood at the time that the TWU vote was a proxy for the broader Conroy group, but it now stood to fall entirely to the union’s secretary, John Berger, leaving Conroy’s other allies out in the cold. Berger’s favoured candidate was Bill Baarini, TWU union officer and former mayor of Hobsons Bay, but Shorten concurred with a view that this would violate the party’s affirmative action rules.

• Further argybargy is unfolding in the Victorian ALP courtesy of a Left faction split between the “National Left”, associated with Anthony Albanese, and the breakaway “Industrial Left” of Victorian Senator Kim Carr. This was formalised after the election when a Left majority resolved to dump Carr from the front bench in favour of Linda Burney, the former New South Wales deputy state leader and newly elected member for Barton. Bill Shorten ensured Carr was accommodated by expanding the front bench, reflecting the importance of the “stability pact” between Carr and the Shorten-Conroy axis in managing affairs the Victorian branch’s affairs. However, the split meant Carr ally Gavin Marshall no longer had Left support to retain his position as Deputy President in the Senate, which has instead gone to Sue Lines from Western Australia.

Marshall last week foreshadowed preselections against Victorian members of the National Left, who include two shadow cabinet members in Jenny Macklin (Jagajaga) and Catherine King (Ballarat) and a junior front-bencher, Andrew Giles (Scullin). As James Massola of Fairfax reports, Marshall confirmed he was organising a challenge to Giles, although no candidate has been identified; claimed there was “discontent in Ballarat”, and that it was a “possibility” he would back a challenge to King; and suggested Macklin could be sure of being spared only because it was “well known that she is retiring”, which a spokesperson for Macklin denied.

• Bob Day, Family First Senator from South Australia, announced last week he would resign from his position after his home building group went into liquidation. Phillip Coorey of the Financial Review reports that Day hopes to be succeeded by his chief-of-staff, Rikki Lambert, who shares his zeal for a pro-business line on workplace relations. However, he faces opposition from Robert Brokenshire, a Liberal-turned-Family First member of the state parliament, and perhaps also Lucy Gichuhi, a Kenyan-born lawyer who was Day’s running mate at the July 2 election.

• A motion moved by Tony Abbott at yesterday’s state council meeting of the New South Wales Liberal Party calling for democratised preselections was reportedly defeated by 246 votes to 174. This was pursued despite the concurrence of Malcolm Turnbull and Mike Baird that the proposed measure should feature among a range of reforms to be considered at a party convention next year, to which state council agreed. Abbott’s proposal would involve plebiscites of party members for all preselections, which is broadly favoured by the party’s hard Right and opposed by the centre Right and the moderates, since it would diminish the importance of the latter’s control of the state executive.

• A poll conducted by Research Now last month for the Australia Institute asked 1426 respondents to list their first and second favoured options for the government to negotiate with in getting legislation through the Senate, which found 54% rating Labor first or second compared with 42% for the Nick Xenophon Team, 32% for the Greens and 29$ for One Nation.