More gory detail on the result of the May 18 federal election, this time focusing on Melbourne, where an anticipated election-winning swing to Labor crucially failed to materialise.

Time for part four in the series that reviews the result of the May 18 election seat by seat, one chunk at a time. As will be the routine in posts covering the capital cities, we start with a colour-coded map showing the two-party preferred swing at polling booth level, with each booth allocated a geographic catchment area by means explained in the first post in this series. Click for an enlarged image.

Now to compare actual election results to those predicted by a demographic linear regression model, to help identify where candidate or local factors might be needed to explain the result. I now offer a new-and-improved form of the model that includes interaction effects to account for the differences in demographic effects between the cities and the regions. The utility of the change, if any, will become more apparent when I apply it to regional seats, which confounded the original version of the model. The coefficients and what-have-you can be viewed here – the table below shows the modelled predictions and actual results for Labor two-party preferred, ranked in order of difference between the result and the prediction of the model. 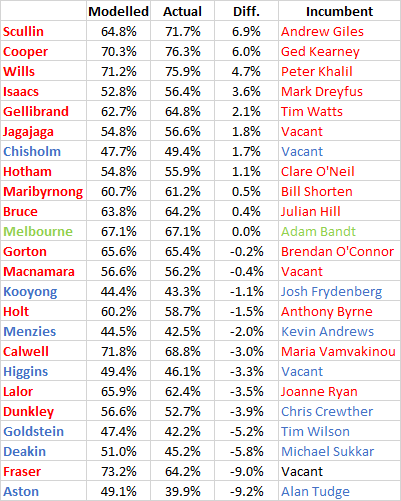 The main eyebrow-raisers are that the model anticipates a stronger performance by Labor in nearly every Liberal-held seats, to the extent that blue-ribbon Higgins and Goldstein are both rated as naturally highly marginal. While this could prove a portent of things to come in these seats, it might equally reflect a model leaning too heavily on the “secular/no religion” variable to cancel out the association between income and Liberal support in the inner cities.

As in Sydney, the numbers provide strong indications of incumbency advantages, with both Labor and Liberal members tending to outperform the model and thus appear at opposite ends of the table. I suspect this reflects both the obvious explanation, namely personal votes for sitting members, and a lack of effort by the parties into each other’s safe seats. A tendency for parties to perform more modestly when a seat is being vacated is not so overwhelming as to prevent strong results relative to the model for Labor in Jagajaga and Liberal in Higgins.

With that out of the way:

Aston (Liberal 10.1%; 2.7% swing to Liberal): Aston attracted a lot of discussion after the 2004 election when the Liberals recorded a higher two-party vote than they did in their jewel-in-the-crown seat of Kooyong. Now, for the first time since then, it’s happened again, and by a fairly substantial margin (the Liberal-versus-Labor margin in Kooyong having been 6.7%). As illustrated in the above table, the swing places Alan Tudge’s margin well beyond what the seat’s demographic indicators would lead you to expect.

Bruce (Labor 14.2%; 0.1% swing to Labor): Located at the point of the outer suburbs where the Labor swing dries up, cancelling out any half-sophomore effect that may have been coming Julian Hill’s way after he came to the seat in 2016.

Calwell (Labor 18.8%; 0.9% swing to Liberal): Among the modest number of Melbourne seats to swing to the Liberals, reflecting its multiculturalism and location at the city’s edge. Maria Vamvakinou nonetheless retains the fifth biggest Labor margin in the country.

Chisholm (Liberal 0.6%; 2.3% swing to Labor): Labor’s failure to win Chisholm after it was vacated by Julia Banks was among their most disappointing results of the election, but the result was entirely within the normal range both for Melbourne’s middle suburbs and a seat of its particular demographic profile. The swing to Labor was concentrated at the northern end of the electorate, which may or may not have something to do with this being the slightly less Chinese end of the electorate.

Cooper (Labor 14.6% versus Greens; 13.4% swing to Labor): With David Feeney gone and Ged Kearney entrenched, the door seems to have slammed shut on the Greens in the seat formerly known as Batman. After recording high thirties primary votes at both the 2016 election and 2018 by-election, the Greens crashed to 21.1%, while Kearney was up from 43.1% at the by-election to 46.8%, despite the fact the Liberals were in the field this time and polling 19.5%. In Labor-versus-Liberal terms, a 4.2% swing to Labor boosted the margin to 25.9%, the highest in the country.

Deakin (Liberal 4.8%; 1.7% swing to Labor): While Melburnian backers of the coup against Malcolm Turnbull did not suffer the retribution anticipated after the state election, it may at least be noted that Michael Sukkar’s seat swung the other way from its demographically similar neighbour, Aston. That said, Sukkar’s 4.8% margin strongly outperforms the prediction of the demographic model, which picks the seat for marginal Labor.

Dunkley (LABOR NOTIONAL GAIN 2.7%; 1.7% swing to Labor): Together with Corangamite, Dunkley was one of only two Victorian seats gained by Labor on any reckoning, and even they can be excluded if post-redistribution margins are counted as the starting point. With quite a few other outer urban seats going the other way, and a part-sophomore effect to be anticipated after he succeeded Bruce Billson in 2016, it might be thought an under-achievement on Chris Crewther’s part that he failed to hold out the tide, notwithstanding the near universal expectation he would lose. However, his performance was well beyond that predicted by the demographic model, which estimates the Labor margin at 6.6%.

Fraser (Labor 14.2%; 6.1% swing to Liberal): Newly created seat in safe Labor territory in western Melbourne, it seemed Labor felt the loss here of its sitting members: Bill Shorten in Maribyrnong, which provided 34% of the voters; Maria Vamvakinou in Calwell, providing 29%; Tim Watts in Gellibrand, providing 20%; and Brendan O’Connor in Gorton, providing 16%. The newly elected member, Daniel Mulino, copped the biggest swing against Labor in Victoria, reducing the seat from first to eleventh on the national list of safest Labor seats.

Gellibrand (Labor 14.8%; 0.3% swing to Liberal): The city end of Gellibrand followed the inner urban pattern in swinging to Labor, but the suburbia at the Point Cook end of the electorate tended to lean the other way, producing a stable result for third-term Labor member Tim Watts.

Goldstein (Liberal 7.8%; 4.9% swing to Labor): Tim Wilson met the full force of the inner urban swing against the Liberals, more than accounting for any sophomore effect he might have enjoyed in the seat where he succeeded Andrew Robb in 2016. Nonetheless, he maintained a primary vote majority in a seat which, since its creation in 1984, has only failed to do when David Kemp muscled Ian Macphee aside in 1990.

Gorton (Labor 15.4%; 3.0% swing to Liberal): The swing against Brendan O’Connor was fairly typical of the outer suburbs. An independent, Jarrod Bingham, managed 8.8%, with 59.2% of his preferences going to Labor.

Higgins (Liberal 3.9%; 6.1% swing to Labor): One of many blue-ribbon seats that swung hard against the Liberals without putting them in serious danger. Nonetheless, it is notable that the 3.9% debut margin for Katie Allen, who succeeds Kelly O’Dwyer, is the lowest the Liberals have recorded since the seat’s creation in 1949, surpassing Peter Costello’s 7.0% with the defeat of the Howard government in 2007. Labor returned to second place after falling to third in 2016, their primary up from 14.9% to 25.4%, while the Greens were down from 25.3% to 22.5%. This reflected a pattern through much of inner Melbourne, excepting Melbourne and Kooyong.

Holt (Labor 8.7%; 1.2% swing to Liberal): The populous, northern end of Holt formed part of a band of south-eastern suburbia that defied the Melbourne trend in swinging to Liberal, causing a manageable cut to Anthony Byrne’s margin.

Hotham (Labor 5.9%; 1.7% swing to Labor): The swing to third-term Labor member Clare O’Neil was concentrated at the northern end of the electorate, with the lower-income Vietnamese area around Springvale in the south went the other way.

Isaacs (Labor 12.7%; 3.4% swing to Labor): What I have frequently referred to as an inner urban effect actually extended all along the bayside, contributing to a healthy swing to Mark Dreyfus. The Liberal primary vote was down 7.4%, partly reflecting more minor party competition than in 2016. This was an interesting case where the map shows a clear change in temperature coinciding with the boundaries, with swings to Labor in Isaacs promptly giving way to Liberal swings across much of Hotham, Bruce and Holt.

Jagajaga (Labor 6.6%; 1.0% swing to Labor): Jenny Macklin’s retirement didn’t have any discernible impact on the result in Jagajaga, which recorded a modest swing to her Labor successor, Kate Thwaites.

Kooyong (Liberal 5.7% versus Greens): Julian Burnside defied a general Melburnian trend in adding 2.6% to the Greens primary vote, and did so in the face of competition for the environmental vote from independent Oliver Yates, whose high profile campaign yielded only 9.0%. Labor was down 3.7% to 16.8%, adrift of Burnside’s 21.2%. But with Josh Frydenberg still commanding 49.4% of the primary vote even after an 8.3% swing, the result was never in doubt. The Liberal-versus-Labor two-party margin was 6.7%, a 6.2% swing to Labor.

Lalor (Labor 12.4%; 1.8% swing to Liberal): The area around Werribee marks a Liberal swing hot spot in Melbourne’s west, showing up as a slight swing in Lalor against Labor’s Joanne Ryan.

Macnamara (Labor 6.2%; 5.0% swing to Labor): Talked up before the event as a three-horse race, this proved an easy win for Labor, who outpolled the Greens 31.8% to 24.2%, compared with 27.0% to 23.8% last time, then landed 6.2% clear after preferences of the Liberals, who were off 4.6% to 37.4%. The retirement of Michael Danby presumably explains the relatively weak 5.0% primary vote swing to Labor in the seven booths around Caulfield and Elsternwick at the southern end of the electorate, the focal point of its Jewish community. The result for the remainder of the election day booths was 9.7%.

Maribyrnong (Labor 11.2%; 0.8% swing to Liberal): Nothing out of the ordinary happened in the seat of Bill Shorten, who probably owes most of his 5.0% primary vote swing to the fact that there were fewer candidates this time. Typifying the overall result, the Liberals gained swings around Keilor at the electorate’s outer reaches, while Labor was up closer to the city.

Melbourne (Greens 21.8% versus Liberal; 2.8% swing to Greens): The Greens primary vote in Melbourne increased for the seventh successive election, having gone from 6.1% in 1998 to 22.8% when Adam Bandt first ran unsuccessfully in 2007, and now up from 43.7% to 49.3%. I await to be corrected, but I believed this brought Bandt to within an ace of becoming the first Green ever to win a primary vote majority. For the second election in a row, Bandt’s dominance of the left-of-centre vote reduced Labor to third place. On the Labor-versus-Liberal count, Labor gained a negligible 0.1% swing, unusually for a central city seat.

Menzies (Liberal 7.2%; 0.3% swing to Labor): Very little to report from Kevin Andrews’ seat, where the main parties were up slightly on the primary vote against a smaller field, and next to no swing on two-party preferred, with slight Liberal swings around Templestowe in the west of the electorate giving way to slight Labor ones around Warrandyte in the east.

Scullin (Labor 21.7%; 2.1% swing to Labor): Third-term Labor member Andrew Giles managed a swing that was rather against the outer urban trend in his northern Melbourne seat.

Wills (Labor 8.2% versus Greens; 3.2% swing to Labor): The Greens likely missed their opportunity in Wills when Kelvin Thomson retired in 2016, when Labor’s margin was reduced to 4.9%. Peter Khalil having established himself as member, he picked up 6.2% on the primary vote this time while the Greens fell 4.3%. Khalil also picked up a 4.2% swing on the Labor-versus-Liberal count, strong even by inner urban standards, leaving him with the biggest margin on that measure after Ged Kearney in Cooper.