Another static reading of the BludgerTrack opinion poll aggregate, plus some preselection news.

This week’s reading of BludgerTrack, supplemented only by the usual weekly result from Essential Research, is another big load of nothing, the only movement being a gain for the Coalition on the seat projection in Western Australia, balanced by a loss in Victoria. One Nation has bumped downwards for the second week in a row, but this is very likely a statistical artefact. BludgerTrack is making no effort to bias adjust for One Nation, which is recording stronger numbers from Newspoll (11% in the last poll) than Essential Research (down to 6% this week). Since Newspoll hasn’t reported for three weeks, Essential’s numbers are presently carrying greater weight. If the Newspoll that will presumably be out tonight or tomorrow is true to form, expect One Nation to tick back upwards on BludgerTrack next week. Nothing new this week on leadership ratings.

• Latika Bourke of Fairfax reveals that leaked nomination papers reveal the five contestants the Western Australian Liberal Senate vacancy of Chris Back, whose resignation took effect in the middle of last month. The front-runner out of an all male line-up is said to be Slade Brockman, a former staffer to local conservative heavyweight Mathias Cormann. Also on the list are David Barton, a physiotherapist; Gabi Ghasseb, a Lebanese-born and Bunbury-based businessman; and two entrants on the Liberals’ Battle of the Somme-length casualty list at the March state election: Michael Sutherland, former Speaker and member for the Mount Lawley, and Mark Lewis, former Agriculture Minister and upper house member for Mining and Pastoral region. Noting the absence of women, Bourke reports that Erin Watson-Lynn, a director of AsiaLink said to be aligned with Julie Bishop and the moderate tendency, was considering nominating but failed to find support.

• As the federal parliamentary term enters its second year, we’re beginning to hear the first murmurings about preselections for the next election. Tom McIlroy of The Canberra Times reports Liberal nominees for Eden-Monaro will include former Army combat engineer Nigel Catchlove, and that “international relations expert and Navy veteran Jerry Nockles is considering a tilt”. Nationals federal director Ben Hindmarsh says the party is considering fielding a candidate in the seat for the first time since 1993. State upper house MP Bronnie Taylor is mentioned as a possible contender, odd career move though that would be.

• With the retirement of Thomas George at the next state election, the Byron Shire Echo reports that the Nationals will conduct an open primary style “community preselection” to choose a new candidate in Lismore, which they very nearly lost to the Greens in 2015.

• The Australian Parliamentary Library brings us a review of last year’s election and a look at what would happen in the event that an early election required a mini-redistribution, both by Damon Muller.

• If you’ve ever been wondering what happened to content that used to be accessible on the website before the redesign removed the sidebar, you might find now an answer on my newly reupholstered personal website, pollbludger.net. At the very least you’ll be able to access the historical BludgerTrack charts, comment moderation guidelines and links to all my federal, state and territory election guides going back to 2004 (albeit that some of these have lost their formatting and are a bit of a dog’s breakfast). I hope to use this site a lot more in future for things the Crikey architecture can’t accommodate. 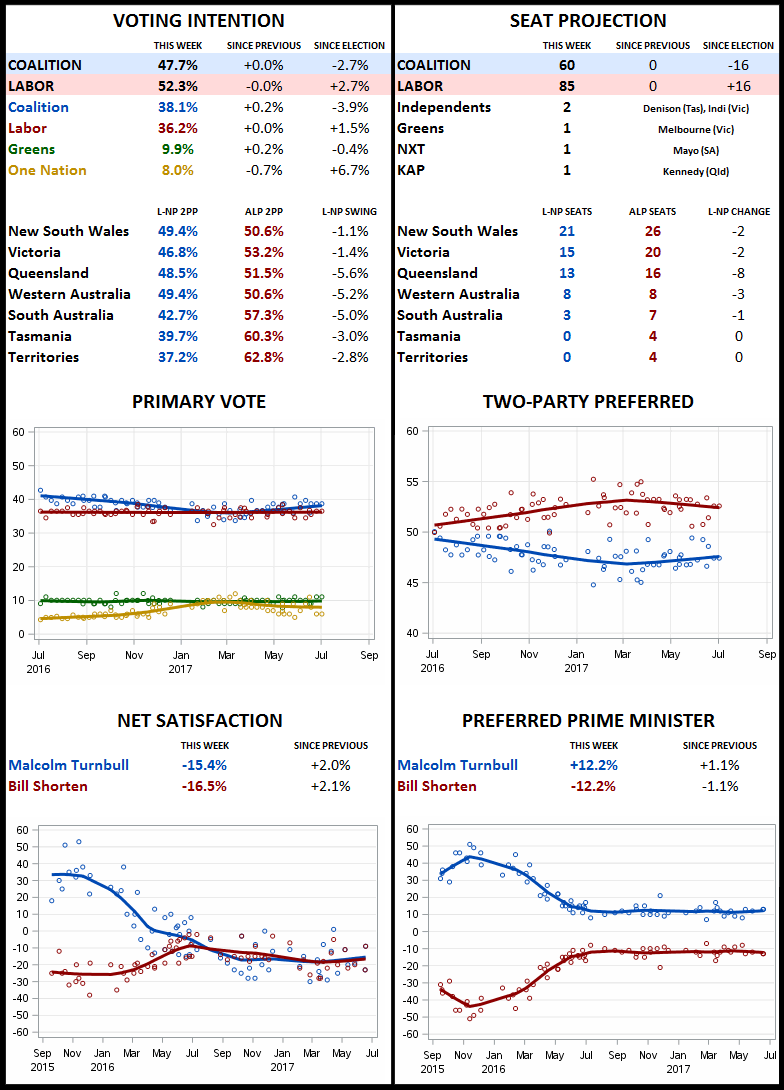