One stray poll brings the BludgerTrack aggregate back to life, but the result is much the same as it was at the close of business last year.

BludgerTrack returns following the break of the New Year polling drought, courtesy of GetUp! ReachTEL poll and the year’s debut for Essential Research – although BludgerTrack features only the latter, as it includes only media polls for the sake of consistency. Since the Essential result is the only data point available from the past month, it more or less single-handedly determines where things currently stand, which is to say in much the same place as they did before the start of the drought.

The Essential results on the primary vote were Coalition 38% (up one), Labor 37% (steady), Greens 9% (down one), One Nation 8% (steady) and Nick Xenophon Team 4% (up one), with Labor maintaining its 53-47 lead on two-party preferred. Being the first poll of the year, these results are purely from a one week sample of 1017, and not a rolling average combined the results of two consecutive weeks. The poll also featured the monthly leadership ratings, which both leaders down on “don’t know” for their personal approval. Malcolm Turnbull is up three on approval to 37% and two on approval to 48%, while Bill Shorten is respectively up two to 37% and six to 44%. Turnbull’s lead as preferred prime minister is unchanged at 39-28. 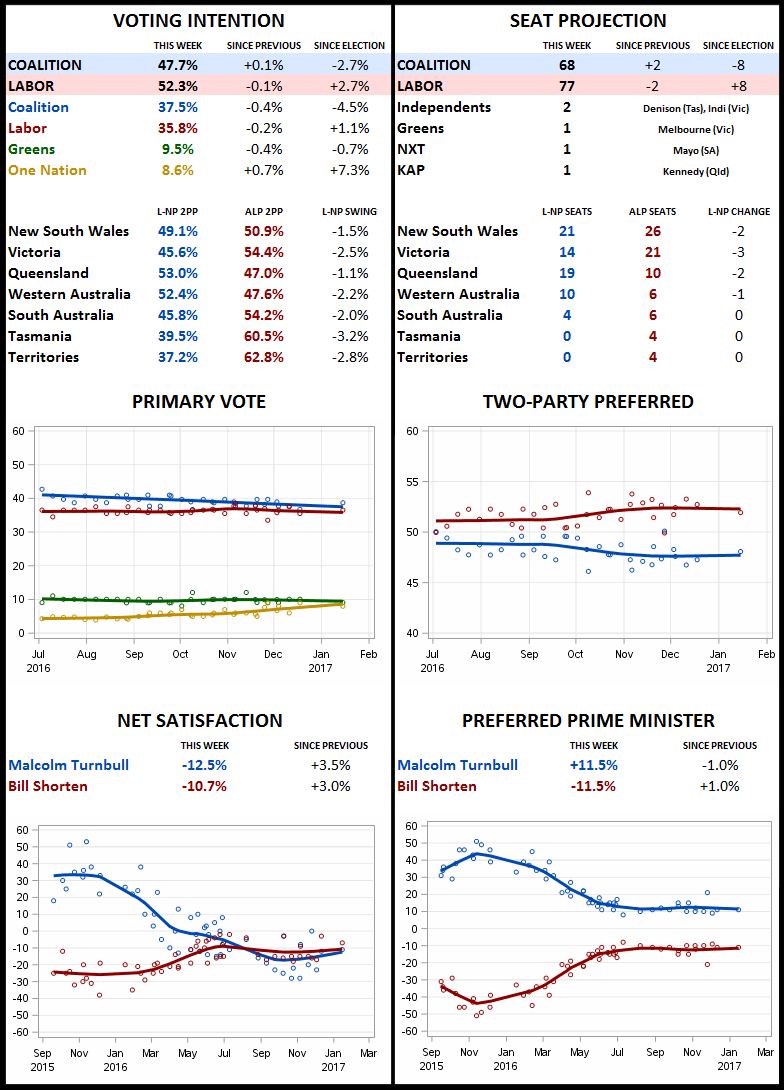 Essential did not features its usual supplementary questions on selected current issues this week, but we do have an international survey by Ipsos that used a variety of measures to probe for Trumpian sentiment around the globe. This found Australia generally landing in the middle of the pack, but one exception was that 48% of Australians rated their country as being in decline, which compared favourably with most other countries – in particular the United States on 60%, and the United Kingdom on 57%.

My paywalled Crikey content has included a review of Mike Baird’s polling and electoral record from today:

Given the circumstances of his departure, and his success in keeping his nose clean as leader of a state that has become proverbial for political malfeasance, most reacted to the news sympathetically (Mark Latham being a seemingly inevitable exception). Even so, Baird leaves office with a patchy electoral record, and with recent polls suggesting the public was growing increasingly disenchanted with his leadership.

And yesterday, an analysis of the electorates where the Coalition is most likely to be punished for the Centrelink debacle:

Reports this week suggest the next targets will be disability support and, particularly dangerously, the aged pension … The highest concentrations of those on unemployment benefits tend to be in low-income areas of the big cities and remote regions with high indigenous populations. The former account for the most reliable Labor territory in the country, while electorates encompassing the latter usually bring together white conservative and indigenous Labor voters, with the former being decisively greater in number. But when pensioners come in to view, real problems start to emerge — especially for the Nationals, whose rural and regional heartland is distinctive for being whiter, poorer and older than the big cities.

And on Monday, a look at the Queensland seats most likely to fall to One Nation, based on analysis of the 2016 Senate vote:

Clear at the top of the list for the LNP is Lockyer, which covers the rural areas between Ipswich and Toowoomba … Labor’s danger areas include the two seats that cover Hanson’s old stamping ground of Ipswich, where the threat is intensified by the weakness of the LNP, since the One Nation candidates will have a low bar to clear in overtaking the LNP and scooping up their preferences.