Little change this week to a poll aggregate that now comes with the added bonus of One Nation. Also featured: South Australian and Northern Territory redistribution news.

Results from Newspoll and Essential Research have elicited next to no change on BludgerTrack, at least so far as the results are concerned – negligible movement all round on voting intention, although what’s there is enough for the Coalition to claw back a seat in Queensland on the projection. Newspoll provides a set of leadership numbers as always, and here too their effect is negligible. 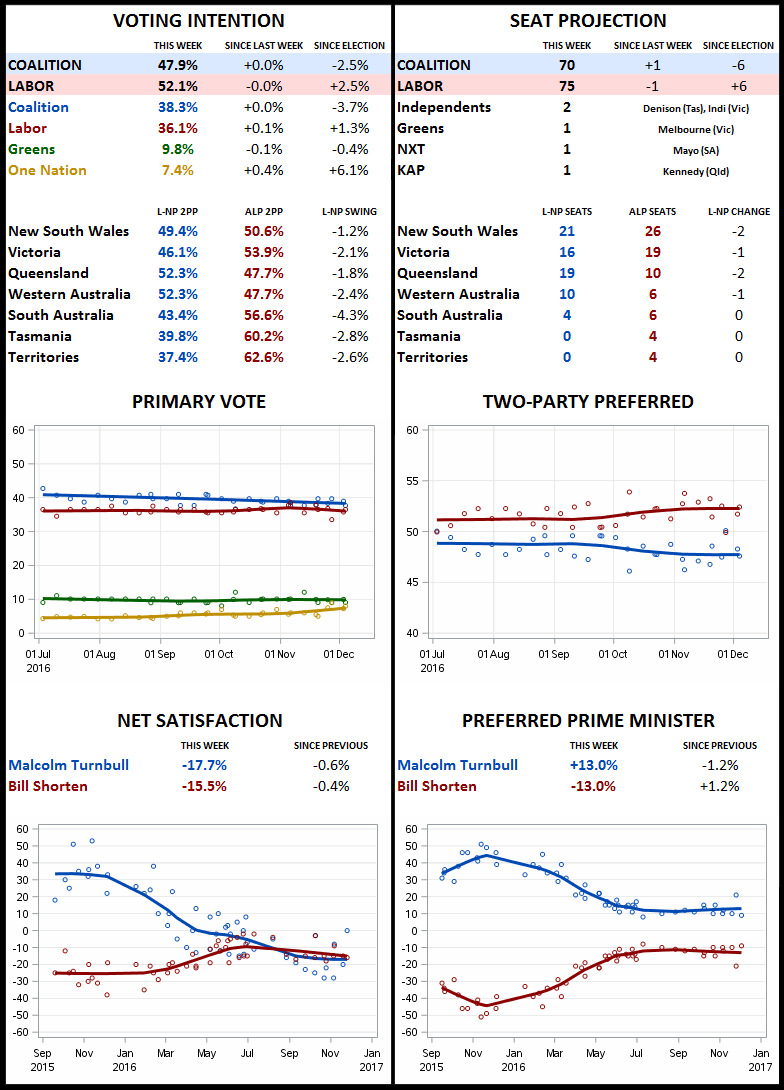 What is new on BludgerTrack is that it’s now tracking One Nation, although the only hard data here is that Essential Research has been providing since the start of September. Polls that don’t report One Nation still have some influence on them through their “others” results, and the estimated results for them show up as data points on the chart. I’ve implemented a bit of a cheat to get the One Nation trendline started from the beginning by using their national Senate vote of 4.3% as a post-election starting point. However, the “since election” reading on the tables goes off the national House of Representatives result of 1.3%, which is unflattering to them as they only fielded 15 candidates.

• The redistribution of the two federal seats in the Northern Territory has been finalised, with no changes made to September’s draft proposal. Three thousand voters have been transferred from growing Solomon (covering Darwin and Palmerston) to stagnant Lingiari (covering the remainder of the territory), in an area encompassing Yarrawonga, Farrar, Johnston and Zuccoli at the eastern edge of Palmerston, together with the Litchfield Shire areas around Knuckey Lagoon east of Darwin. To the very limited extent that this will have an electoral effect, it will be to strengthen Labor in Solomon and weaken them in Lingiari, the area transferred being conservative-leaning.

• The South Australian state redistribution has been finalised, with a large number of changes made to the draft published in August. These are largely to the benefit of the Liberals, who stand aggrieved by their failure to win government in 2014 despite winning the two-party vote by 53-47. The draft redrew the Labor marginals of Elder and Mawson to make them notionally Liberal. However, they did the opposite in Fisher, a normally conservative-leaning seat that Labor managed to win at a by-election in December 2014 after the death of independent member Bob Such. This seat has been renamed Hurtle Vale, and pushed southwards into the Labor-voting Morphett Vale area.

The new set of changes adds a further two seats to the Liberal column, most notably Colton, where Labor cops a transfer of 8000 voters from Glenelg North and West Beach (currently in Morphett), turning the Labor margin of 2% into a Liberal margin of 3.7%. The other seat is Newland, where there was so little in it that a further 200 voters in Humbug Scrub have been enough to nudge it to the Liberal side of the pendulum. There has also been a further boost to the Liberal margin in Elder, where gains around Lower Mitcham in the east (currently in Waite) push the margin out from 1.1% to 4.3%.

The Liberals has also benefited in Adelaide, where the reversal of a proposal to move Walkerville out of the electorate leaves the margin at 2.0%, compared with 2.5% at the election and 0.6% in the draft; and in the Labor-held seat of Lee, where an extra 4000 voters from Colton reduce the Labor margin from 4.6% to 2.6%.