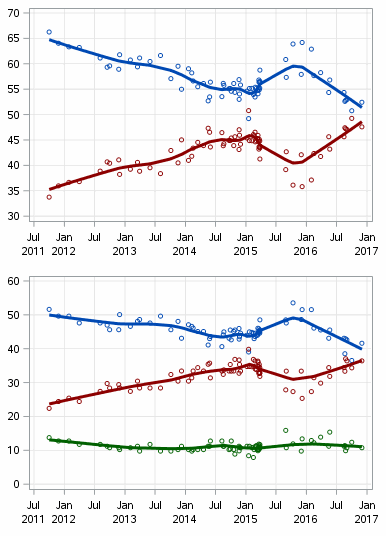 The Australian has what will hopefully be the first in a series of Newspoll state voting intention results, this being the latest bi-monthly result for New South Wales, conducted in November and early December from a sample of 1567. The poll finds the Coalition holding on to its 51-49 lead from September-October, from primary votes of Coalition 41% (down one), Labor 36% (steady) and Greens 11% (steady). Mike Baird’s approval rating is now at 35%, down a further four points from the last poll, and his disapproval is up four to 50%. Luke Foley is up two on approval to 34%, and up one on disapproval to 40%. Baird’s lead as preferred premier has shifted from 42-24 to 43-26.

The charts above show poll aggregation trends going back to the election of the Coalition government in 2011, using bias-adjusted results from 74 polls conducted by seven pollsters.