Panic stations in the Liberal camp ahead of Saturday’s Wentworth by-election, according to latest reports:

• The Australian reports that “leaked” (by which they mean “dropped”) Liberal internal polling has found Kerryn Phelps breaking out to a 55-45 lead, after being level pegging a week ago. Caution should always be taken with reports of internal polling, which is invariably selectively released even if not actually fabricated, and it is clear in this case that the objective is to scare potential protest voters back into line. Nonetheless, an apparent turn against the government is all too explicable given its performance over the past week or so, and is also consistent with the evident desperation of the Prime Minister’s thought bubble about moving the Australian embassy in Israel to Jersualem – an all too obvious pitch at the 12.5% of the Wentworth population that identifies as Jewish, the highest proportion of any electorate in the land.

• The reported movement in internal polling has been reflected on the betting markets, with Ladbrokes now has an unspecified independent a very slight favourite to win, from $2.75 at the start of the week to $1.70, while Dave Sharma is out from $1.33 to $1.80. Labor’s Tim Murray is out very slightly from $7.50 to $8. If you’re up for a bet, particularly a losing one, it would help me out if you signed up through the Ladbrokes advertisement on the sidebar.

• Evidently recounting complaints from the Kerryn Phelps camp, a report by Joe Hildebrand of the Daily Telegraph made overheated claims that a poll conducted for independent candidate Licia Heath a fortnight ago was an example of “push polling”. In particular, a question on Heath’s campaign for a new high school in the electorate prompted an unidentified Phelps campaign operative to assert, “if that’s not push-polling I don’t know what is”. It would seem the spokesperson does not, indeed, know what push polling is – properly understood, the term refers to efforts to disseminate false information under the guise of conducting an opinion poll. But the information in this case is not false, and the poll was very clearly a poll, even if it may not have been a particularly good one. Kevin Bonham notes that such a question may have contaminated voting intention responses if it had preceded it in the question order, but my attempt to clear this up did not elicit a response.

UPDATE: Now Greenpeace has produced results of ReachTEL poll that tends to confirm the picture painted by the reported Liberal internal polling – after allocation of a forced response question for the 2% initially undecided, the primary votes are 33.5% for Dave Sharma (Liberal), 26.4% for Kerryn Phelps (independent), 21.7% for Tim Murray (Labor), 9.2% for Dominic Wy Kanak (Greens) and 5.6% for Licia Heath (independent). Applying the remarkable results for respondent-allocated preferences, which finds over 90% flowing to Phelps, Phelps emerges with a crushing lead of 62.4-37.6. The poll was conducted Monday from a sample of 661. Respondents were also asked about their vote in 2016, and the results aligned fairly well with the actual result. Among the other findings were that a remarkable 66.0% agreed, including 54.0% who strongly agreed, with Alex Turnbull’s assertion that the Liberal Party had “been taken over by extremists on the hard right“. For perspective, the course of four ReachTEL polls to have emerged through the campaign has run like so: 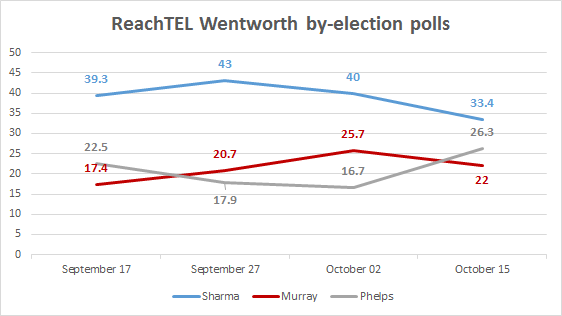