A look under the hood of a rewired BludgerTrack.

BludgerTrack returns for 2018 with methodological tinkering to address two issues. The first is an effort to account for a different preference environment with the rise of the One Nation; the second puts the various pollsters on a level playing field in calculating the leadership rating treds.

After polling a national primary vote of 1.3% from the fifteen lower house seats they contested, One Nation’s polling has been approaching double figures for at least the past year. This limits the utility of allocating preferences as they flowed at the previous election, which is the most reliable method when the minor party environment experiences little change from one election to the next. The Coalition received barely more than half of One Nation’s preferences in 2016, but they did quite a bit better than that at last year’s state elections, receiving around 65% in Queensland and 60% in Western Australia — presumably because many of their new supporters have defected from the Coalition.

The alternative to previous election preference flows is respondent allocation, which the experience of the state elections suggests is leaning too far in the other direction. The approach now taken by BludgerTrack is to split the difference, which would have worked well if it had been applied in 2016. This is done by combining trend measures of previous election and respondent-allocated flows, with Ipsos and ReachTEL providing the data for the latter.

The chart below shows how these trends pan out in the latest run of the aggregation. Both pollsters had the Coalition maintaining its mid-thirties share from the election until around the middle of last year, when it rose to the low forties. With the major parties now accounting for barely three-quarters of the total vote, a change on this scale would, by itself, result in more than a full point of difference to the two-party total. 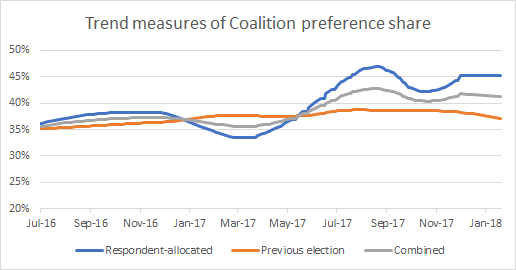 The impact of the new method on the BludgerTrack two-party trend reading is illustrated below, with the chart on the left showing how things would look if previous election preferences were still applied. The upshot is that BludgerTrack should be at least half a point less favourable for Labor than it was before, at least for as long as the recent pattern of respondent-allocated preference polling holds.

The second change relates to the leadership ratings measures, which until now made no effort to distinguish between the very substantial peculiarities of different pollsters. This meant its results were saying as much about the pollster that had reported most recently as they did about changes in the standing of the two leaders.

Unlike voting intention, leadership ratings cannot be measured against a real world benchmark. So the approach taken here is to treat Newspoll as the centre of gravity, and adjust the other pollsters by benchmarking them against a trend measure of Newspoll. These results are illustrated in the table below, which effectively shows how different a typical result from each pollster will be from a typical Newspoll.

This shows that both leaders, but Malcolm Turnbull especially, do much worse on Newspoll’s approval and disapproval ratings than they do from Essential, Ipsos and YouGov. Since these differences are now being corrected for, BludgerTrack will tend to record weaker net satisfaction results for both leaders, but especially for Turnbull.

This brings us to the latest BludgerTrack numbers, which as always are displayed in all their glory on the sidebar. Since the Essential poll is the only new data point of the last few weeks, a certain amount of caution is advised. While the Essential numbers were slightly better than the Coalition’s form late last year, more than half the 1.2% shift recorded in favour of the Coalition is down to the new preference method. It hasn’t made much difference to the seat projection, on which the Coalition gain one apiece in Queensland and South Australia, but lose one in Western Australia.

The impact of the new leadership ratings method on Malcolm Turnbull’s net satisfaction is muted by a set of Essential numbers which were, by the pollsters long-term standards, relatively good for him. However, Bill Shorten had a weak result from Essential, and is accordingly well down.