The latest Essential Research poll finds less than no evidence for the Coalition bounce recorded by Newspoll.

The Essential Research fortnight rolling average result departs firmly from the Newspoll script in recording a two-point jump to Labor, who now lead the two-party preferred by 55-45. On the primary vote, the Coalition drops one to 34%, Labor is up one to 37%, One Nation is down one to 10% and the Greens are steady on 9%. Also from this survey:

• A series of questions on power costs records 77% saying they have increased over the last few years, compared with 2% who clicked on the wrong button; 75% approving of a policy to reserve gas for domestic use, versus 6% disapproval; 29% apiece favouring more government control and more government ownership of energy production, versus 17% favouring “more private power companies to increase competition”; 68% approving of the South Australian government’s plan to build, own and operate a new gas-fired electricity plant along with a battery storage plant, with only 11% disapproving (59% and 17% among South Australian respondents, although there were fewer than 100 of these); 25% favouring banning coal seam gas mining, 31% favouring its restriction on farming land, and 14% believing current regulation to be sufficient.

• An occasional series of questions in which respondents are asked about the attributes of the two parties, which finds Labor increasing by three to five points on most positive indicators since last June, whereas the Liberals are down about five on most positive indicators and up about five on negative ones. Worst of the bunch by some margin is “divided”, on which the Liberals have shot from 52% to 68%. They have also dropped nine points on “has a good team of leaders”, on which Labor now leads 41% to 33%.

• A ReachTEL poll of Peter Dutton’s outer northern Brisbane seat of Dickson, conducted for progressive think tank the Australia Institute, finds Dutton with a two-party preferred lead over Labor of 52-48, essentially unchanged from his 1.6% winning margin in 2016. However, the primary votes are shaken up by the arrival of One Nation on 17.6% (after including responses for a follow-up question prompting the undecided), with Dutton on 38.2% (down 6.4%), Labor on 30.2% (down 4.7%) and the Greens on 9.7% (down 0.2%). The poll also finds 60.5% opposed to public funding for the Adani Carmichael coal mine, with 17.5% in support; and 65.2% in favour of a 50% renewable energy target for 2030, with 22.8% opposed. It was conducted last Wednesday from a sample of 726.

• Courtesy of the ACTU, we have a second set of ReachTEL poll numbers on federal voting intention in Western Australia. After including results of a follow-up question prompting the initially undecided, the primary votes are Labor 42.8%, Liberal 31.7%, Nationals 5.6%, Greens 6.8% and One Nation 4.2%. The poll also finds 29.3% rating the penalty rates cut as very important in helping shape their vote; 23.2% somewhat important; 18.4% somewhat unimportant; and 29.0% as very unimportant. On the question of whether the federal government should legislate to protect penalty rates, 61.6% said yes and 38.4%. The poll was conducted Tuesday from a sample of 1471.

• A separate finding on the impact of penalty rates on the WA result comes from a poll by Labor-aligned lobbying group Campaign Capital, which finds 62.6% out of 1800 respondents across eleven marginal seats saying they opposed the cut.

I’m continuing to lag with the BludgerTrack updates – what’s below is what I should have published last week, without the latest numbers from Newspoll and Essential Research. The latest update will, I promise, be published in good time at the end of the week. 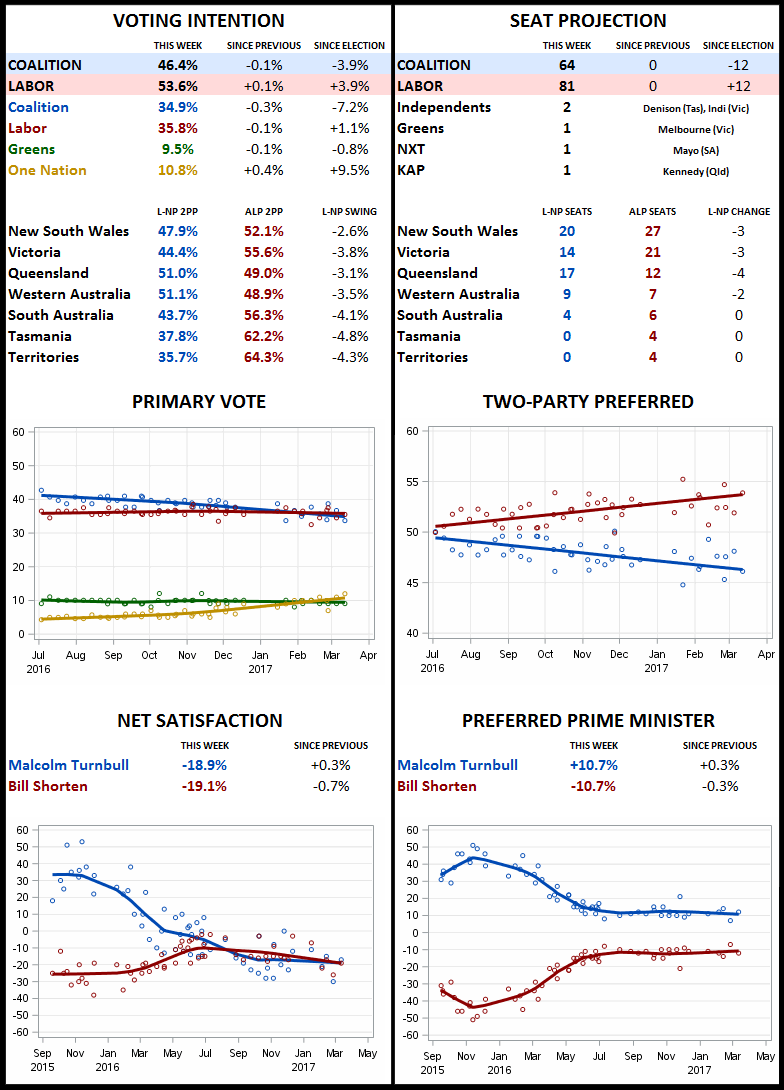