Sketchy though it is, the polling evidence so far this year suggests a turn for the worse for the Turnbull government.

BludgerTrack is being heavily determined at present by the two new year data points from Essential Research, but for what those data points are worth, they suggest the government may have entered a new phase in its polling fortunes. The latest result has wrenched two-party preferred almost a full point in favour of Labor, although this has only yielded a gain of one on the seat projection. The change is a straightforward result of Labor taking primary vote share off the Coalition, with One Nation failing to gain further ground for the first time in a while. 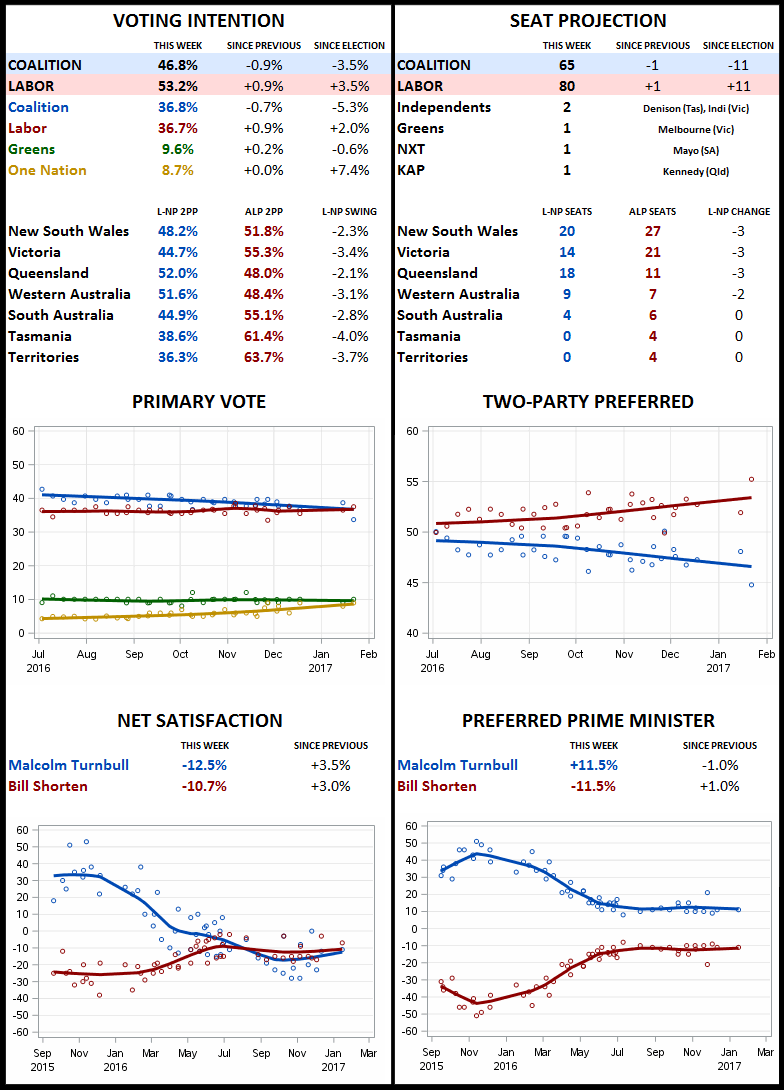 In other news, two by-elections loom in New South Wales:

• Mike Baird’s departure from the premiership and the parliament will result in a by-election for his seat of Manly. Labor is not competitive in the seat, which corresponds with Tony Abbott’s federal seat of Warringah, but it was held by independents for 16 years until Baird unseated David Barr in 2007. Potential Liberal preselection nominees identified in media reports include James Griffin, KMPG director and former Manly deputy mayor; Alex Dore, NSW Young Liberals president and management consultant; Natalie Ward, a private legal practitioner who relinquished a job as a political staffer in 2013 amid controversy over her marriage to David Begg, a co-principal of the lobbying firm associated with moderate powerbroker Michael Photios; Ron Delezio, founder of a hospital charity and father of Sophie Delezio, who suffered horrific injuries when a car crashed into a childcare centre in 2003; and Walter Villatora, a local party identity and advocate for preselection reform.

• The second New South Wales by-election will follow today’s resignation by Health Minister Jillian Skinner as the member for North Shore, ahead of her anticipated demotion to the back bench. North Shore neighbours Manly to the west, and is similarly solid in its conservatism. The Sydney Morning Herald reports that Liberal preselection contestants may include Felicity Wilson, a former Property Council executive, and Tim James, former chief of staff to Energy Minister Anthony Roberts.