Two new polls this week, from Newspoll and Essential Research (expect the post-election pollster duopoly to be broken over the next few days), produce an incremental move to Labor on the BludgerTrack poll aggregate, sufficient to gain them a seat in Western Australia on the seat projection. Newspoll as always provided a new set of leadership ratings, which likewise failed to make much difference. 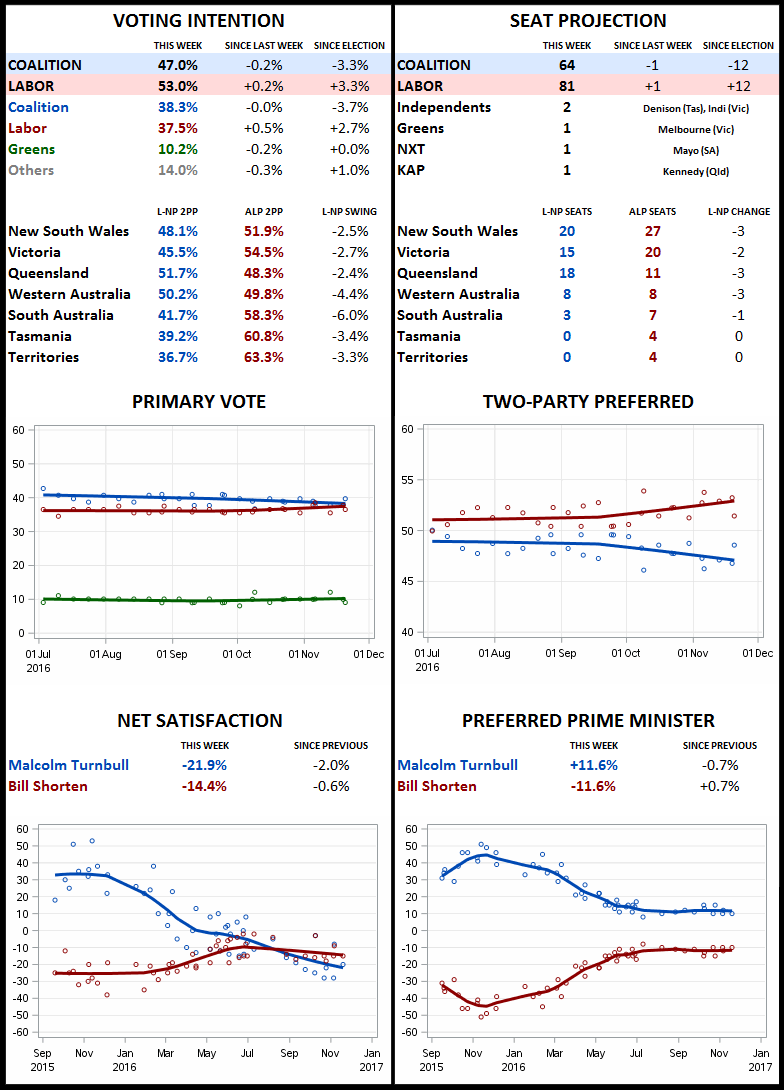 • A production error resulted in me neglecting to mention the Essential Research numbers earlier this week. There was a move back to the Coalition on two-party preferred, putting Labor’s two party lead at 52-48, with primary votes at Coalition 38% (up one), Labor 37% (steady), Greens 10% (down one), One Nation 6% (steady) and Nick Xenophon Team 3% (steady). Essential have surpassed themselves with their supplementary questions this week, by recording strikingly high levels of agreement with a series of pointedly Trumpian statements about the present state of our own nation. This included an 83-9 split in favour of “the government should bring manufacturing jobs to Australia”, 75-14 for “if people who are not Australian citizens commit a crime they should be deported”, 77-13 for “we should do more to stop people entering our country illegally”, 52-32 for “I would like to see Australia more like it was in the past” and 60-26 for “no matter who is in power the system is rigged against ordinary people”. There was a 46-40 split in favour of “racial equality has gone too far”, and 40-48 against “gender equality has gone too far” (no gender breakdown on the latter unfortunately). Other findings: 64-17 in favour of cutting back on 457 visas, 45-44 in favour of taxes to make junk food more expensive, 51-39 for a 20% levy on soft drinks, and 56-16 for resettling refugees on Nauru and Manus Island to the US.

• Possum Comitatus relates that union-commissioned polling in Queensland finds One Nation support “in the teens”, and that the support is driven not by “the things One Nation gets headlines and TV grabs for”, but rather by those who “think, in the general case, that the world is fucked and not operating as it was promised”. For what it’s worth, Campbell Newman rates that a shy Hansonite effect is causing polls to rate One Nation several points too low; that the party will win a bag of seats at the next state election; and that the Liberal National Party should be laying the groundwork to enter into a coalition with them. I had a fair to say on such matters in a paywalled article for Crikey yesterday.