Scattered reports of internal polling provide encouragement for Labor in New South Wales, but find them struggling in a number of other places.

There’s a bunch of electorate-level internal polling doing the rounds at the moment, something that always needs to be viewed with regard to the fact that those who commissioned might only be publicising the results that they like. Nonetheless, the display at the bottom of this post, which is updated with all the latest results, shows up no distinction in the average swing recorded across media and private polls over the course of the campaign period. As for published polling, Essential Research should, as usual, be with us later today. Roy Morgan has decided to dispense with its national polling and instead focus on electorate-level polling for the remainder of the campaign, the latest example of which isolates the ten strongest seats for the Greens. These results are based on samples of around 300 aggregated from all the outfit’s regular polling going back to January. That means a good deal of the survey period was from a time when the Coalition still had a substantial lead, and the “others” vote was lower than it has since become. Morgan has presumably, and probably correctly, concluded that it will generate more headlines this way than if it were merely one national poll among many.

• The Age reports that a poll conducted for the Greens suggests the party to be well in the hunt in the inner Melbourne seat of Batman, despite the blow dealt them when the Liberals announced its how-to-vote cards would preference Labor ahead of them. The poll has Greens candidate Alex Bhathal leading Labor member David Feeney by 41% to 28% on the primary vote, which pans out to 55-45 on respondent-allocated preferences, and would produce much the same result on 2013 election preferences. The automated phone poll was conducted by Lonergan Research from a large sample of 1600 respondents. However, The Age report also relates that “internal and larger-scale polling for the ALP” actually shows Labor leading on the primary vote. The report also says Labor’s poll shows the party to be “much more popular with voters under 24 than the Greens”, whose “strongest age bracket is 35-50 year olds” – a finding that frankly isn’t credible.

• The Advertiser reports that “high-profile Labor frontbencher Kate Ellis is facing a shock defeat to the Liberals in her inner-city seat of Adelaide”, although it’s based on a rather thin sample of 364. The poll was conducted for the ALP by ReachTEL, which I’ve never seen associated with a sample of this size before (UPDATE: And sure enough, ReachTEL denies it was their poll). According to the report, the poll credits Liberal candidate David Colovic with a 51-49 lead over Labor member Kate Ellis. The report speculates that Labor provided the paper with the polling “to rally support for Ms Ellis in the face of a statewide surge by the Nick Xenophon Team”.

• The Australian Education Union is circulating three ReachTEL polls conducted in marginal seats in New South Wales, one of which shows Labor with a commanding lead of 55-45 in the legendary bellwether electorate of Eden-Monaro. Primary votes are 41.2% for Liberal incumbent Peter Hendy, 38.6% for Labor challenger Mike Kelly, and 11.0% for the Greens. A fairly extraordinary flow of respondent-allocated preferences pushes Labor’s two-party total well past where it would be based on 2013 election preferences, in this case 52.6%. Sample: 719.

• The Daily Telegraph reports that a poll of the South Australian regional seat of Barker, conducted by ReachTEL for the CFMEU from a sample of 869, has Nick Xenophon Team candidate James Stacey leading Liberal incumbent Tony Pasin by 52-48.

• A ReachTEL poll for the eastern Melbourne electorate of Menzies, conducted for independent candidate Stephen Mayne, credits Liberal member Kevin Andrews with a two-party preferred vote of 61-39, which would be 63-37 on previous election preference flows. Andrews’ share of the two-party vote in 2013 was 64.4%. The poll was conducted June 13 from a sample of 719. 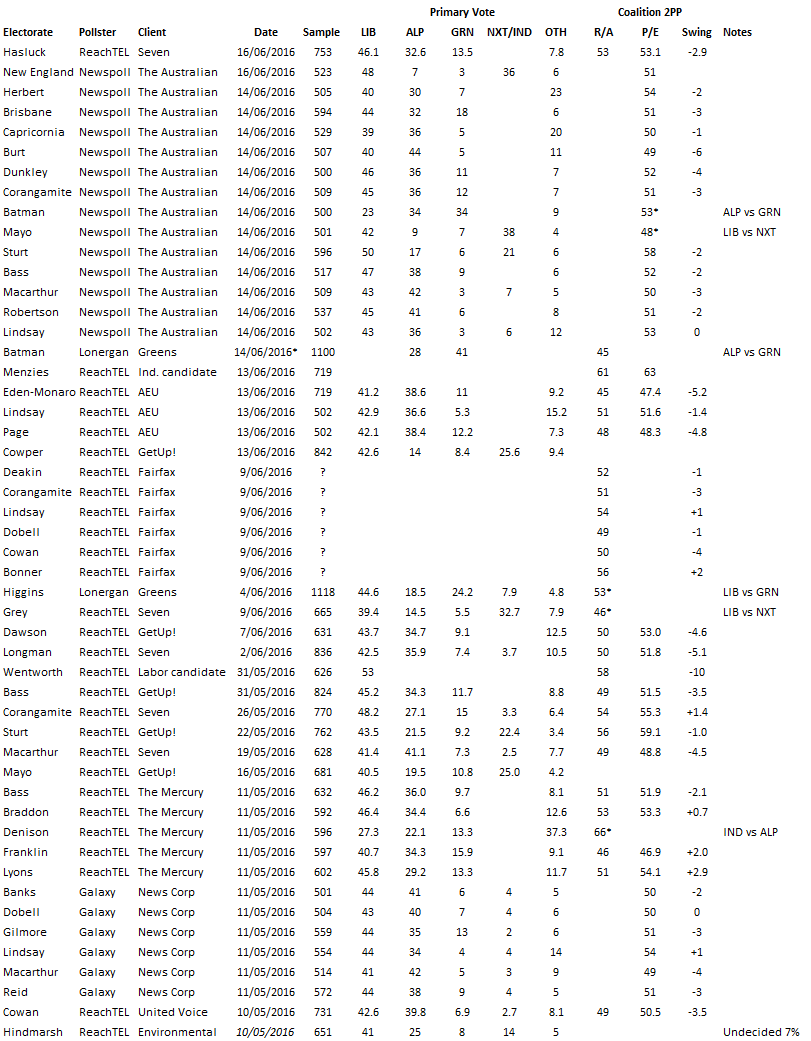