A new poll finds Wyatt Roy’s Queensland seat of Longman going down to the wire, while Labor goes up nationally in Ipsos and down in ReachTEL.

• The latest fortnightly campaign Ipsos poll for the Fairfax papers has Labor breaking out to a 51-49 lead, reversing the result from the last poll. On the primary vote, Labor is up two on the primary vote to 36%, the Coalition is down one to 42%, and the Greens are down one to 13%. Labor is credited with a 51-49 lead on respondent-allocated as well as previous election preferences, the former having been 50-50 in the previous poll. Fifty-five per cent of respondents nonetheless expect the Coalition to win, with only 22% opting for Labor. The poll interrupts a recent steadying trend in Malcolm Turnbull’s personal ratings, finding him down three on approval to 45% and up four on disapproval to 42%. However, his lead as preferred prime minister is little changed, shifting from 47-30 to 49-31. Bill Shorten is up one on both approval and disapproval, to 41% and 47%. The live interview phone poll was conducted Tuesday to Thursday from a sample of 1359.

UPDATE: Here’s BludgerTrack updated with both sets of national results, plus the state breakdowns from Ipsos. As has been the case since mid-April, there is nothing to separate the parties on two-party preferred. There’s a fair bit of movement at the state level though, thanks to a noisy set of Ipsos breakdowns that credit the Coalition with very little support in Victoria and Western Australia. This leaves them down one in both states on the seat projection, while gaining two in Queensland and one in New South Wales (they have also lost one in the territories, because I’ve junked my poll tracking there as unreliable and plugged in the national swing instead). Ipsos’s personal ratings for Malcolm Turnbull are his weakest from the pollster to date, and they have accordingly had a sizeable impact on the leadership trend. 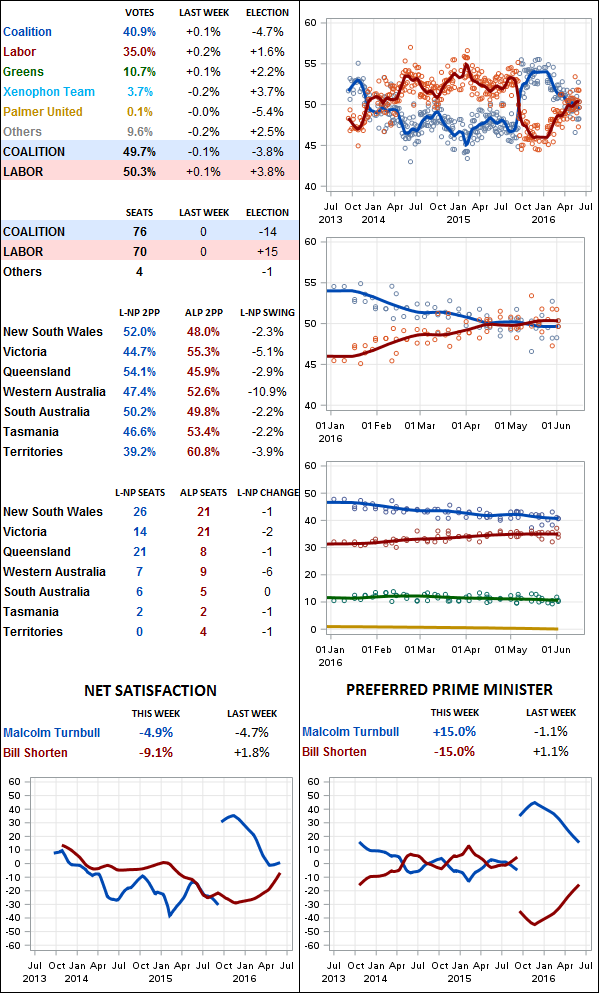