A positive reception to the budget fails to move the needle on Essential Research’s voting intention reading. Also featured: a closer look at the budget response results from Newspoll.

As reported by The Guardian, Essential Research has provided the third post-budget poll, and it concurs with Newspoll in having Labor leading 52-48, but in not in finding the Coalition’s improved, since 52-48 was where Essential already had it a fortnight ago. Both major parties are down a point, the Coalition to 38% and Labor to 35%, the Greens are up one to 11% and One Nation is down two to 5% – which means the residue is up fairly substantially, by three points to 10%.

The poll also agrees with Newspoll and Ipsos in finding a positive response to the budget, which was rated favourably by 51% and unfavourably by 27%. Respondents were presented with a list of budget measures and asked yea or nay, with unsurprising responses: strongly positive for infrastructure spending, tax relief measures aimed at those on low and middle incomes and the projection of a surplus, but much weaker on flattening tax scales. Also featured was an occasional question on best party to handle various issues, which does not appear to have thrown up anything unusual. Full detail on that will become available when the full report is published later today.

UPDATE: Full report from Essential Research here. The poll was conducted Thursday to Sunday from a sample of 1069.

Backtracking a little to the weekend’s Newspoll numbers, I offer the following displays covering three of their measures in two charts, placing the results in the context of the post-budget polling that Newspoll has been conducting in consistent fashion since 1988. The first is a scatterplot for the questions on the budget’s anticipated impact on personal finances and the economy as a whole (net measures in both cases, so positive effect minus negative effect), with last week’s budget shown in red. Naturally enough, these measures are broadly correlated. However, respondents were, relatively speaking, less convinced about the budget’s economic impact than they normally would be of a budget rated so highly for its impact on personal finances. 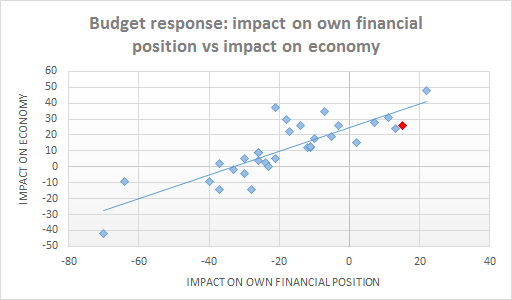 Nonetheless, the standout fact is that the budget was very well received overall – the personal finances response was the second highest ever recorded, and economic impact came equal seventh out of thirty-two. There are, however, two grounds on which Labor can take heart. First, the one occasion when the personal finances result surpassed this budget was in 2007, immediately before the last time the Coalition was evicted from office. The second is provided by the question of whether the opposition would have done better, which if anything came slightly at the high end of average. For Labor to hold its ground here in the context of a budget that had a net rating of plus 25 on personal impact, compared with plus two last year, suggests voters have revised upwards their expectations of what Labor might do for them financially. 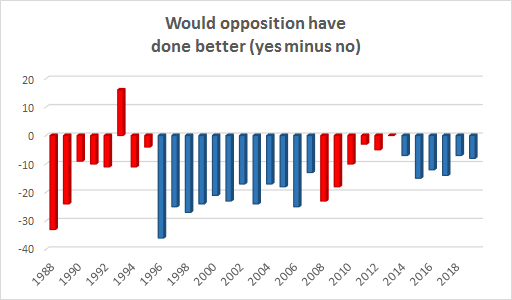