Good news for Malcolm Turnbull on personal ratings, but Labor keeps its nose in front in the post-budget Newspoll, and lands well clear in Ipsos.

The Australian reports Labor’s two-party lead in Newspoll is unchanged at 51-49, but Malcolm Turnbull has enjoyed a big hike on preferred prime minister, his lead out from 38-35 to 46-32. Both major parties are up a point on the primary vote, the Coalition to 39%, Labor to 38%, while the Greens are steady on 9% and One Nation are down one to 6%. Malcolm Turnbull is up three on approval to 39% and down three on disapproval to 50%; Bill Shorten is down one on 33% and up one to 55%. The poll was conducted Thursday to Sunday from a sample of 1728.

By contrast, an Ipsos poll for the Fairfax papers has Labor’s lead out from 52-48 a month ago to 54-46, which partly reflects the fact that Ipsos is sticking with a straight application of 2016 election preferences. A separate result based on respondent-allocated preferences has it at 53-47, out from 50-50 last time. The primary votes are Coalition 36% (steady), Labor 37% (up three), the Greens 11% (down one) and One Nation 5% (down three). Malcolm Turnbull is up four on approval to 51% and down four on disapproval to 39%, Bill Shorten is up one to 39% and down two to 51%, and Turnbull leads 52-32 as preferred prime minister, little changed from 52-31 last time.

Both polls also feature results on budget response, which produce the strongest results for impact on personal finances of any budget since the extravaganzas of 2007 and 2008. Newspoll found 29% saying it would make them better off and 27% worse off, which is the first net positive result since 2007, albeit that this was aided by an eight point spike in the “uncommitted” result. The respective numbers from Ipsos were 38%, the highest since 2006, and 25%. However, 57% of Ipsos respondents said they would prefer the money from the tax cuts instead go to pay off government debt, compared with 37% who favoured the cuts.

Newspoll also found 41% rating the budget good, up five on last year, and 26% bad, down one; but Labor did better than last year on the question of whether they could have done better, with 37% for yes (up four) and 44% for no (down three). Forty-eight per cent rated Malcolm Turnbull more capable of handling the economy compared with 31% for Bill Shorten; 38% rated Scott Morrison the better economic manager compared with 31% for Chris Bowen; and 51% said Labor should support the seven year tax-cut package, with 28% opposed.

Below are two displays putting the Newspoll results in the context of the similar polling that has been conducted after every budget of the past 30 years. The first of these plots the net personal impact result against the net economic impact, with this budget illustrated by the red dot. It shows the budget ranking fifth out of 31 budget on personal impact, with the top four having run in succession from 2004 to 2007. However, the result for economic impact is only slightly above average, at plus 15% compared with plus 10.9%. The red dot’s position below the trendline confirms that this was a budget whose benefits were seen as relatively favouring personal rather than broader economic impact.

The second chart records the net result for the “would the opposition have done better” question (Coalition governments in blue, Labor in red), on which the latest budget equals the horror 2014 budget as the best result ever recorded by Labor. The Coalition tends to do better on this question, and on budget response questions more generally, but even it only managed a net positive result after the other conspicuously poorly received budget within the Newspoll time frame, namely that brought down by John Dawkins after Labor’s unexpected 1993 election victory. 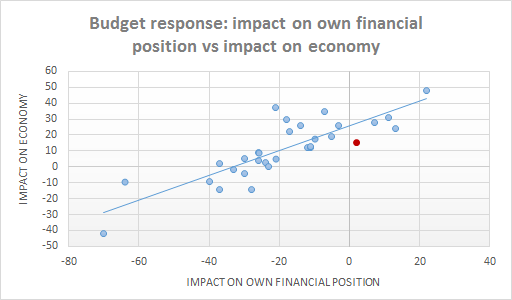 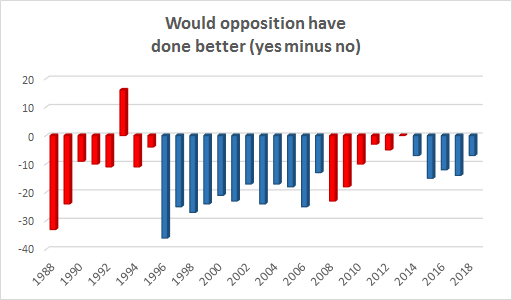