A fortnight on from the Malcolm Turnbull’s unfortunate Newspoll milestone, Newspoll itself suggests the embarrassment has done him little harm.

The latest Newspoll has Labor’s lead down from 53-47 to 51-49, which is the Coalition’s best result since the start of what is now Malcolm Turnbull’s run of 31 successive Newspoll defeats. This doesn’t reflect much activity on the primary vote, on which the Coalition and Labor are both steady at 38% and 37%, with the Greens down one to 9% and One Nation steady on 7%.

There is also encouragement for Malcolm Turnbull on leadership ratings, with his approval up four to 36% and disapproval down four to 53%, although Bill Shorten also improves by two on approval to 34% and three on disapproval to 53%. Turnbull maintains only a very modest lead as preferred prime minister, of 38-35, out from 38-36 last time. The poll also finds strong support for a reduction in immigration levels, with 56% rating the present level too high, 28% about right, and only 10% too low.

A point that should be noted about the Coalition’s apparent improvement in Newspoll is that at least part of it would seem to be down to an adjustment in their preference allocations, from a model based purely on results from the 2016 election to one which gives the Coalition a stronger flow of One Nation preferences, presumably based on the experience of the Queensland and Western Australian state elections. The chart below compares the published two-party results from Newspoll with how the raw primary numbers convert using a) a 50-50 split in One Nation preferences, as they were in 2016; and b) a 60-40 split in the Coalition’s favour, which seems more likely based on state election experience. 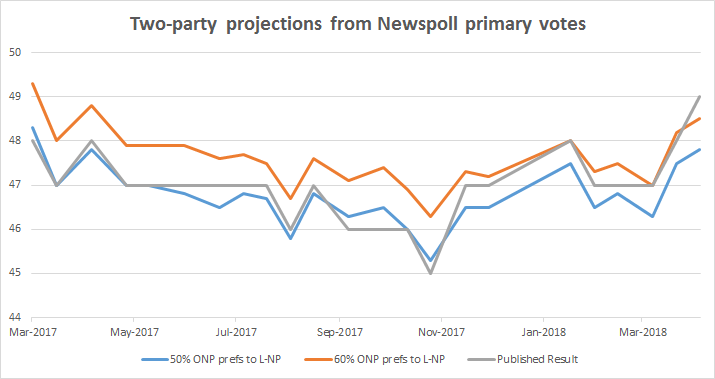 It will be noted that Newspoll (the grey line) closely tracked the 50-50 model (the blue line) until December last year, when it snapped to the 60-40 model (the orange line). Also noteworthy is the overshoot of the grey line for the very latest result, which reflects the fact that the Coalition may have been a little lucky with rounding this week. As Kevin Bonham notes, a calculation from the published, rounded primary vote totals using the 50-50 preferences model yields a 52.4-47.6 lead for Labor – a result that would have generated considerably less buzz than this, the “best Coalition result in 18 months”.