A detailed quarterly breakdown of federal voting intention at state level records Labor sagging in Victoria, but still on course for an election-winning swing in Queensland.

First up, please note that we have had the rare treat overnight of a state poll from South Australia, which you can read all about here.

Now to BludgerTrack, and the in-depth look at state-level federal voting intention trends that I lay on at the end of each quarter. First up, the vanilla weekly version of BludgerTrack, which is displayed at the bottom of the post, is inclusive only of the usual result from Essential Research. ReachTEL will have to wait until next week, because I don’t yet have all the data I need from it, and the new fortnightly YouGov/Fifty Acres poll won’t make the cut until I have more than one data point to work with. The only change worth noting on the headline numbers is that some of the edge has come off the recent spike to One Nation, although the overall pattern of recovery from a nadir around May is still evident. The Coalition makes a net gain of one on the seat projection, being up one in Victoria and Western Australia. Nothing new this week for leadership ratings.

There has been a very slight trend back to the Coalition over the past three months, but overall the impression has been of consistency on every measure, whether relating to voting intention or leadership. But as illustrated by the detailed quarterly breakdowns, which draw on this week’s breakdowns from Newspoll together with unpublished numbers from Essential, there has been quite a bit going on beneath this deceptively calm surface. Since the last such update three months ago, Labor has gone down 0.6% on two-party preferred, but up four on the seat projection – testament to the sensitivity of Queensland, where Labor’s 0.8% gain has translated into five seats.

It’s in the two biggest states that the Coalition’s modest improvement has been concentrated, particularly in Victoria, where Labor is down 2.7%. This raises the possibility that the heavy weather encountered by Daniel Andrews’ government is causing the party damage federally, which is going unnoticed due to Labor’s strong standing in the state in absolute terms (the swing since the last election is still bigger than New South Wales, off an already stronger base, the state’s limited strategic importance (while more than three times bigger than Queensland’s, the change on the previous quarter has only shifted the seat projection by one) and Labor’s sustained strength elsewhere. South Australia joins Queensland as the other state where Labor has gained ground, and they have tapered off only a little in Western Australia after what was probably an unsustainable peak at the time of the state election. 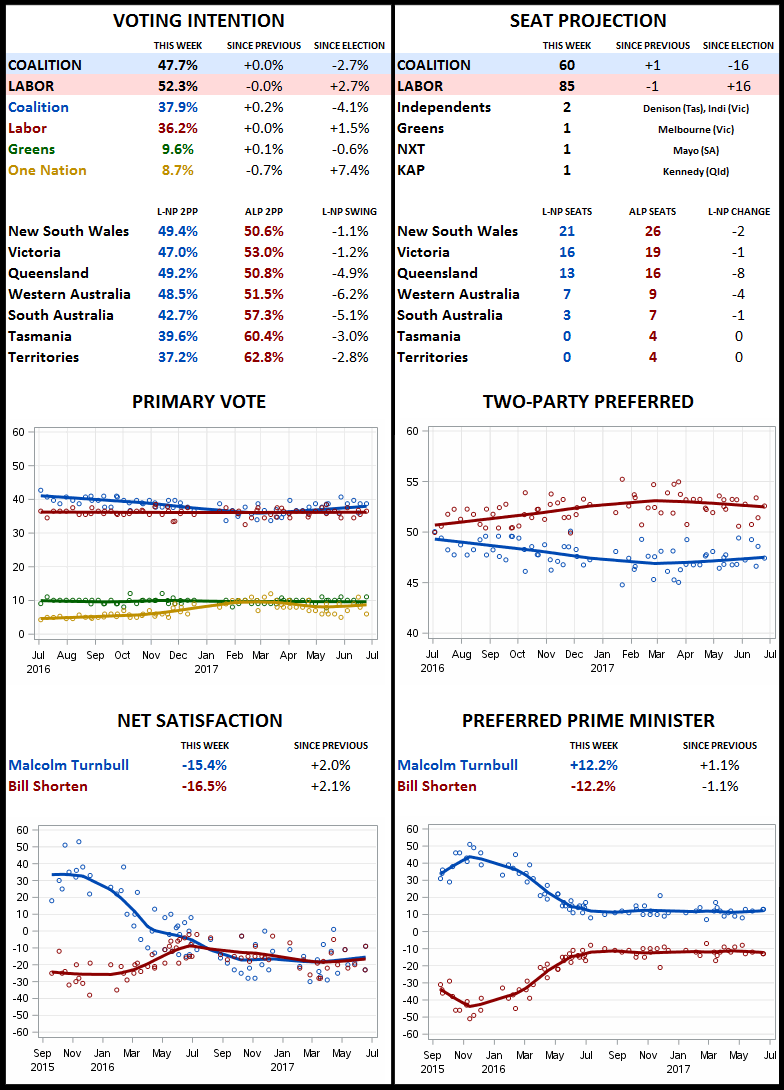