Two new polls fail to make much difference to the aggregated two-party reading, although One Nation has bounced back after a recent fallow patch.

New results from Newspoll and Essential Research have failed to have any impact on BludgerTrack’s two-party preferred reading, but there’s one point worth noting on the primary vote, with the recent lift in One Nation’s poll ratings finally kicking into action on the trend measurement (more on that here if you’re a Crikey subscriber). Last week I noted signs that Labor’s surge in Western Australia was abating, with two seats flipping back to the Coalition on the seat projection, but this week they’ve flipped back again. However, this is counterbalanced by one gain apiece for the Coalition in New South Wales and Victoria. Newspoll and Essential both provide new numbers on personal ratings, which result in both leaders taking a uptick on net approval, and Malcolm Turnbull slightly improving on preferred prime minister. 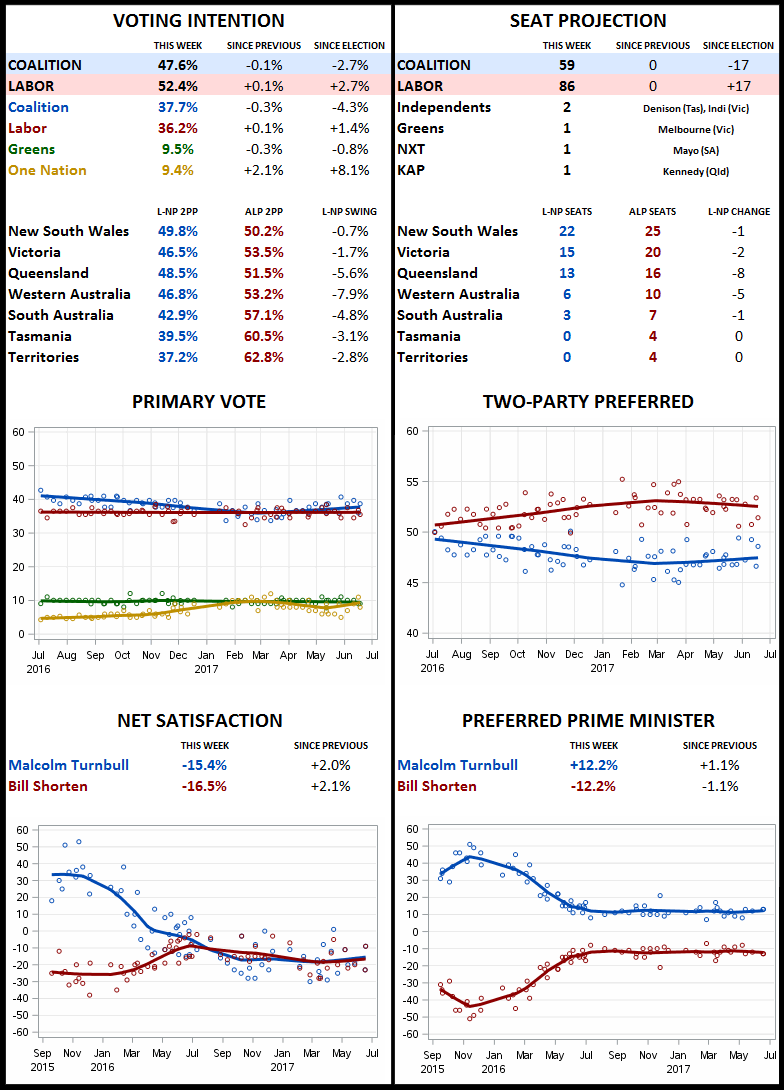 • The Joint Standing Committee on Electoral Matters has published its third interim report from its inquiry into last year’s federal election, this time into modernisation of the Australian Electoral Commission. The report gives a sympathetic hearing to the AEC’s complaints that it has lacked the resources to keep pace with technological change, and is unduly straitjacketed by an overly prescriptive Electoral Act. Most significantly, it recommends trials be conducted of electronic counting of House of Representatives ballot papers, building upon the scheme introduced for the new Senate system last year, whereby manual data entry is supplemented by scanning and optical character recognition. The significance of apparent Russian efforts to hack into American electoral systems has been duly noted elsewhere.

• Antony Green has published his usual statistical review of the Western Australian election for the state parliament. This one is particularly interesting in that it features comprehensive data on preference flows for each minor party, which I don’t believe I’ve ever seen from a state election before.