Poll aggregation records a slight trend in favour of the Coalition ahead of Tuesday’s budget.

Before we proceed, please note posts below on British and French elections, and a bumper post on Tasmania that encompasses newly published federal and state electorate boundaries, today’s three elections for seats in the state’s upper house, and a state poll result that provides good news for the new Labor leader, Rebecca White.

The only new addition to the BludgerTrack aggregate this week is the usual weekly Essential Research result, an all too common state of affairs in Newspoll’s off weeks that should finally be rectified with YouGov’s imminent entry to the Australian polling caper. The trendline is now doing something it hasn’t done since the election – bending back slightly in favour of the Coalition. The Coalition have also picked up two this week on the seat projection, one apiece in Victoria and South Australia. The other trend worth noting is that One Nation are down for the seventh week in a row. Nothing new this week on leadership ratings. 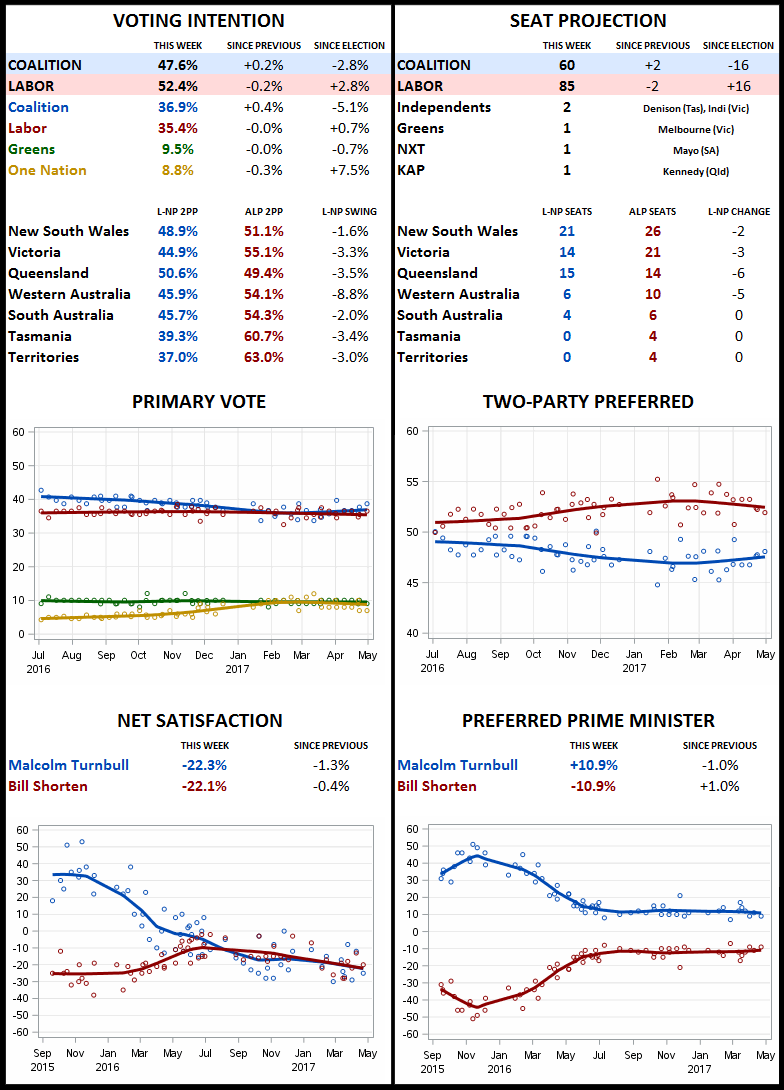 I’ve had two paywalled articles this week in Crikey, which is well worth your subscriber dollars if the state of the Australian news media is of concern to you, as it should be. One of these tackled Peta Credlin’s revisionism concerning the electoral gender gap:

In defiance of the conventional wisdom, Credlin sought not just to dispel the “myth” of the Tony Abbott “woman problem”, but also to argue that the charge could more properly be levelled at his successor. The implications of Credlin’s claim run well beyond the small matter of the Turnbull-Abbott rivalry, as gender has been the most volatile demographic element in the federal electoral equation since the knives came out for Kevin Rudd on June 23, 2010.

The other considered One Nation’s recent fadeout and its implications for the looming Queensland state election:

The One Nation renaissance is once again inviting comparisons to Groundhog Day, as the party faces the possibility of deregistration in Queensland over irregularities in its legal structure. The latest development adds to an accumulation of bad news not just for One Nation, but also for Queensland’s Liberal National Party opposition, which has been hoping that One Nation will provide the key to a quick return to office after its shock defeat in January 2015.