NOTE: The configuration of comments at the moment is as a result of a glitch which will, I am told, be rectified over the next 24 hours – so hopefully by Wednesday afternoon.

This week’s reading of the Essential Research fortnight rolling average has Labor’s blowout lead from last week moderating slightly, from 55-45 to 54-46. On the primary vote, the Coalition is up a point to 35%, Labor is steady on 37%, the Greens are up a point to 10%, One Nation are down two to 8% and the Nick Xenophon Team is up a point to 4%.

The poll also finds 59% approval for the government’s proposal to invest $2 billion in the Snowy Hydro scheme, while its proposed changes to the Racial Discrimination Act, once explained, draw 45% approval and 34% disapproval. However, another question finds 16% saying racial discrimination laws are too strong, 26% too weak and 40% about right.

Asked to select three from a list of favoured government priorities, health and ensuring big business pays a fair share of tax come out on top, and investment in renewal energy gains six points since the question was last asked in the middle of last year. On the importance of various international relationships, the United Kingdom has gained six points since June last year and Japan five points, both of which reverse earlier downward trends, leaving the UK and the United States at level pegging on top of the table. Only 6% rate that Australia’s relationship with the US is getting better compared with 41% for worse, for reasons I can only speculate about.

• Roy Morgan conducted one of its occasional small-sample polls on party leaders, which recorded little change for Malcolm Turnbull since the last such poll in October, with approval down one to 30% and disapproval up one to 54%. However, Bill Shorten recorded particularly weak ratings of 28% approval and 56% disapproval, respectively down three and up seven, while Turnbull’s lead on preferred prime minister widened from 47-32 to 49-32. Peter Dutton was added as a response option to the question of best person to lead the Coalition, and his 5% appeared to cause Tony Abbott to come down from 14% to 9%. Julie Bishop retained her lead over Malcolm Turnbull, although it narrowed from 34-25 to 30-27. Bill Shorten continues to run third on the Labor question, which has Tanya Plibersek up a point to 26%, Anthony Albanese down five to 19% and Bill Shorten up one to 15%. The poll was conducted Tuesday to Thursday two weeks ago from a sample of 534.

• Supplementary questions from yesterday’s Ipsos poll for Fairfax address penalty rates (29% believe the cut will encourage more businesses to open on Sunday, against 63% who do not), negative gearing and capital gains tax concessions (35% believe they should be pared back, 40% do not) and company tax cuts (44% support, 39% oppose). Another tranche of results published today relate to section 18C of the Racial Discrimination Act, finding 78% agreeing with the section’s “offend, insult or humiliate” provision versus 17% opposed, but as there is no allowance for the “intimidate or harass” alternative proposed by the government, I would consider the Essential findings more useful.

• The Australian had a follow-up to last week’s Newspoll finding 59% support for higher penalty rates on Sundays, 29% for reducing them to Saturday levels, and 10% abolishing them altogether.

I remain a week behind the eight-ball on BludgerTrack, and continue to promise that normal service will resume at the end of this week. Let’s see if it actually happens this time. For the time being, here is the result I should have published at the end of last week, inclusive of the Newspoll result and last week’s Essential, but not the latest Ipsos and this week’s Essential. 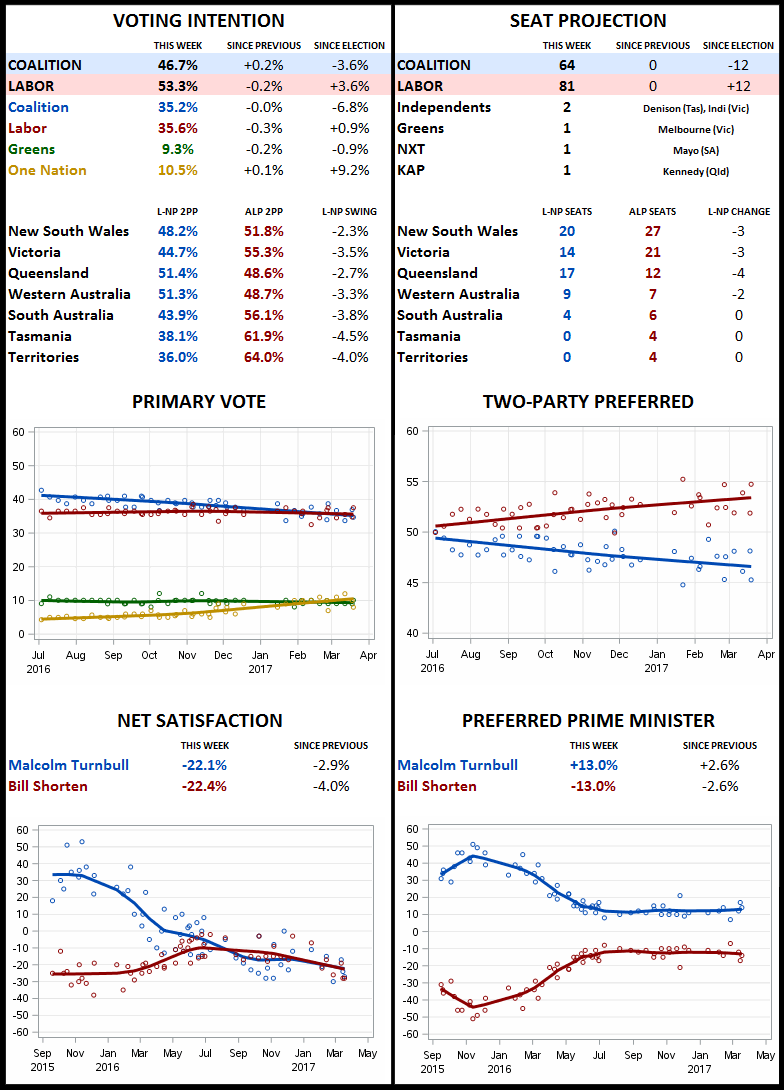