Movement back to the Coalition on BludgerTrack this week, as Ipsos and Essential deliver the government relatively encouraging results.

The return of Ipsos this week threw a spanner in the BludgerTrack works, since its results were starkly divergent from the trend of the other two pollsters, to an extent that went well beyond the pollster’s observed peculiarities before the election. In particular, the primary vote for Labor was four points below anything recorded by Newspoll or Essential since the election; the Coalition were about two points below its recent form; and the Greens came in about six points on the high side. My general strategy for bias adjustment had been to use half measures of the difference between election result and trend measurements for the relevant pollster, but that wasn’t remotely adequate to cover the peculiarity of this Ipsos result. So, for the time being at least, I’m incorporating Ipsos in a way that is all-but-neutral to the overall calculation, but in which the trendlines will be affected by the movement in Ipsos results (or will be, when there is more than one Ipsos result to go off).

Despite the Ipsos numbers having little impact on this week’s result, there has been a fairly solid move back to the Coalition on the voting intention reading, which partly reflects the recent trend of Essential Research, which has had Labor’s lead over the past fortnight narrowing from 53-47 to 51-49. On the BludgerTrack seat projection, this translates into gains for the Coalition of two seats in Western Australia, and one apiece in New South Wales, Victoria and South Australia. Here the Ipsos numbers did play a role, since its state breakdowns were particularly strong for the Coalition in Western Australia and South Australia. Ipsos also makes as much difference as it would always have done to the leadership ratings, the model for which begins with the Malcolm Turnbull prime ministership. Reflecting to the overall strength of the Ipsos result for the Coalition, Malcolm Turnbull records a solid recovery on net approval, to the extent of almost closing the gap on Bill Shorten, and widened his lead as preferred prime minister. 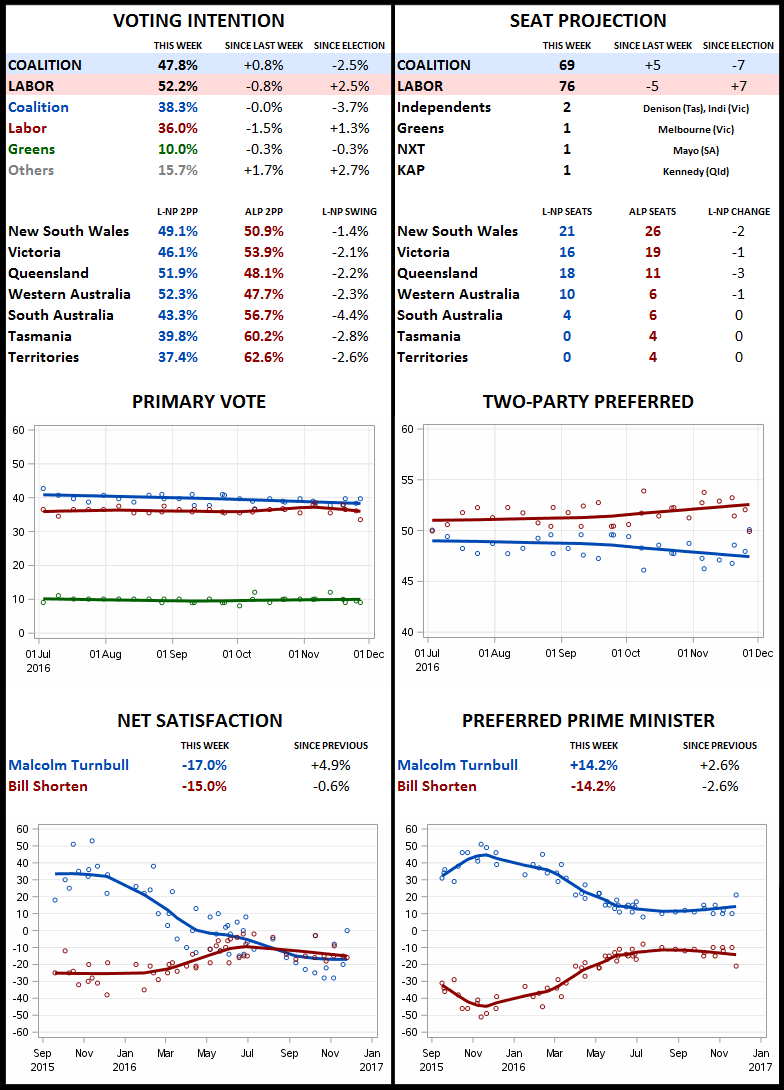