The poll tracker finds absolutely nothing in it in Florida, North Carolina and Nevada, but with Clinton holding enough of a firewall to survive in any case. Also featured: a detailed account of the Senate race.

As election day dawns in the United States, the latest reading of the election tracker is final and definitive, and it has both candidates slightly lower on the national vote compared with yesterday’s reading: Hillary Clinton from 48.6% to 47.7%, and Donald Trump from 44.2% to 43.9%. So far as the electoral college projection is concerned, the safest thing to say is that at least one state-level upset will be required to breach a Clinton firewall of 272 votes versus 266 for Trump.

Beyond that, three states are recorded as being absolutely lineball: North Carolina (15 electoral college votes), where Clinton is credited with a lead that amounts to zero when rounded to the first decimal place; and Florida (29 votes) and Nevada (six votes), where leads of 0.1% are attributed to Trump. However, the expectation is that Clinton will carry Nevada, and that Florida is probably more likely for her than North Carolina. If all lands Trump’s way, he would then most likely be looking to New Hampshire (four votes) or Colorado (nine votes) to tip him over the edge, but the model credits Clinton with respective leads there of 2.4% and 2.9%.

The table below shows the projections state by state, and an interactive map of the results can be viewed here. Stay tuned for the bottom of the post, where you will find a review of the situation in the Senate.

Should the conventional wisdom about the White House race be borne out, the next big question for Hillary Clinton will be what kind of Congress she is looking at. The House of Representatives is one aspect of the election that truly is as rigged as Donald Trump says, in this case because gerrymandering by Republican state administrations helps ensure a Republican majority regardless of what a national majority of voters works (an inefficient distribution of support for the Democrats also plays a part). However, there’s everything to play for in the Senate, where the Republicans’ current hold on 54 of the 100 seats reflects the party’s strong showings at the 2010 and 2014 mid-terms, which was punctuated by a weaker performance on the day of Obama’s re-election in 2014. The seats up for election in this cycle are those elected in 2010, when the Republicans won 24 seats to the Democrats’ 10.

If the Democrats can manage 14 out of 34 tomorrow, they will be able to piece together half the votes on the floor with support from two Democrat-aligned independents, and if they get the White House as well, tied votes will be resolved by the Democratic vice-president. It is everywhere taken for granted that Illinois will not repeat its anomalous Republican victory in 2010, so the question is whether the Democrats can make a net three gains in the seats listed below, on which seven are Republican-held and two are Democratic. Poll trackers in each case show the Democratic candidate as blue and the Republican as read. These are based on the raw results of the polling compiled at RealClearPolitics, with no weighting or bias adjustment. 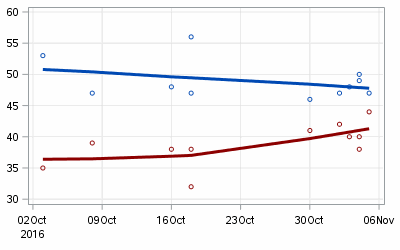 Democratic incumbent Michael Bennet should be able to hold off Republican challenger Darryl Glenn, but the final published poll suggested there were only three points in it. 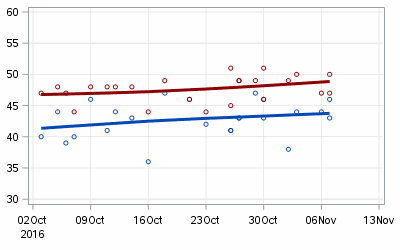 The defending Republican incumbent here is presidential hopeful Mario Rubio, who faces Democratic challenger Patrick Murphy, the House representative for a district around Palm Beach. Rubio has generally looked pretty comfortable in polling, but a few late campaign polls have only credited him with a one-point lead or a tie. 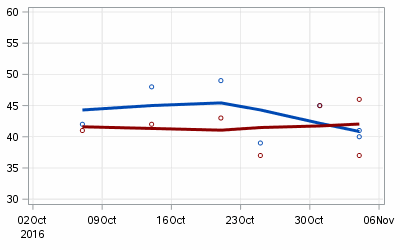 The Democrats have an opportunity in this light red state due to the retirement of three-term Republican Dan Coats, and the return to the fray of Evan Bayh, who held the seat from 1998 until 2010, when he retired ahead of a likely looming defeat. The Republican candidate is Todd Young, who represents one of the state’s nine congressional districts. Bayh has generally looked to have the advantage in polling, but a single poll attributed to “YTHR/Howey Politics” upset the applecart at the end of the campaign with a five-point lead for Young, even while Gravis showed Bayh three points ahead. 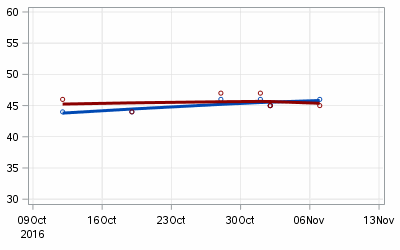 Republican incumbent Roy Blunt would normally feel secure in this red state, but he faces a strong challenge from Missouri’s secretary of state, Jason Kander, who put his record as an Afghanistan veteran to good use in the campaign’s <a href="
“>most memorable television spot
. Polling has been a bit light on, but such as there has been has consistently had it neck-and-neck. 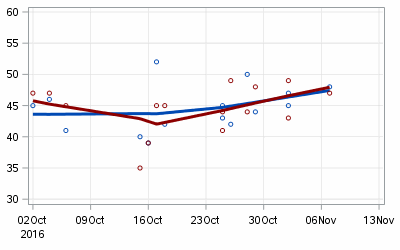 The Democrats are on the defensive in Nevada due to the retirement of party stalwart Harry Reid. The seat will be contested for the Democrats by Catherine Cortez Masto, and for the Republicans by Joe Heck, a Congressman who has been less muted in his objections to Donald Trump’s outrages than some of his party colleagues. There has been little to separate the two in the polls, but reports of Democratic confidence about Clinton’s prospects in Nevada on the strength of early voting turnout are said to carry over to the Senate contest. 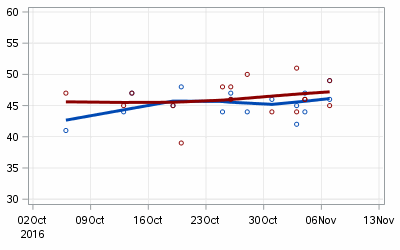 Kelly Ayotte came to this seat in 2010 as the latest Republican to occupy a seat that had been in the party fold since 1980. However, she now faces a strong challenge from the state’s Democratic Governor, Maggie Hassan, who may have been aided by Ayotte’s struggles to formulate a position on her party’s presidential nominee. Late polling has had something for everybody, with one putting Ayotte six points ahead, one putting Hassan four points ahead, and another five polls landing at various points in between. 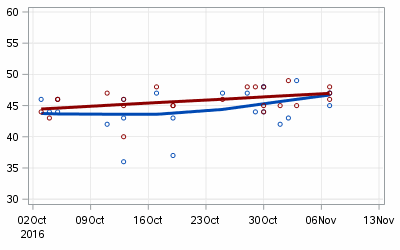 Former state representative Deborah Ross has been polling well enough, particularly at the end of the campaign, to cause concern for senior Republican incumbent Richard Burr. 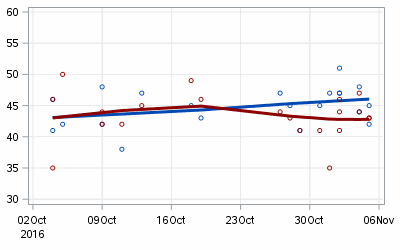 Pat Toomey was a narrow victor here for the Republicans in 2010, and now faces a strong challenge from environmental policy official Katie McGinty. Polling at the end of the campaign has tended to give McGinty the edge, although one late poll has Toomey ahead by a point. 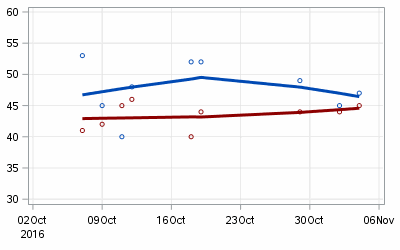 One of the Wisconsin is one of the Democrats’ strongest prospects, with former Democratic Senator Russ Feingold seeking to recover the seat he lost in 2010 to Republican incumbent Ron Johnson. He has led in all but one of the nine polls in October and November, but the most recent have had his margin at one and two points.