Poll aggregation records a big lift for Donald Trump commencing at the start of the last week, even before substantially accounting for any impact of the FBI emails development.

The latest reading of my presidential poll tracker is rather a lot different from the last, which is about half due to a very substantial shift in the polls in Donald Trump’s favour since the beginning of last week, and half due to me changing what had been a very conservative smoothing parameter that was ironing out short-term volatility, including the recent turn to Trump. It so happens that Trump is now credited with narrow leads in most of the swing states, such that Clinton’s now modest lead on national voting intention is projected as an extremely tight outcome in the electoral college of Clinton 272, Trump 266. It wouldn’t surprise me if the model was overshooting in its present reading of the move back to Trump, which can be a difficulty when sharp reversals occur, but we should get more clarity on that score over the coming days. An interactive map display of the results can be viewed here, my paywalled take on the emails development can be read in Crikey here, and below is a trend chart followed by a state-by-state accounting of my projections. 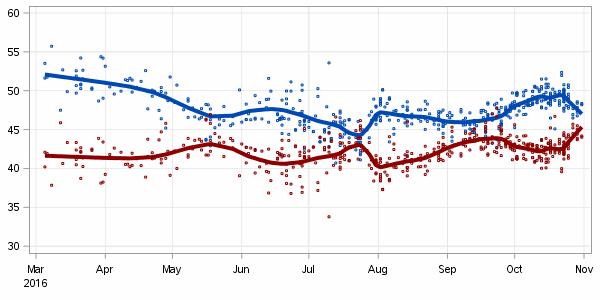