More evidence of a fine balance of support on the national two-party preferred, but with Labor falling short where it matters most.

A rather different set of results emerges this evening from the latest fortnightly campaign poll by Ipsos for the Fairfax papers. It records a dramatic increase in the minor party vote, with both the Coalition and Labor down three points, to 39% and 33% respectively. Most of the yield goes to “others”, up four points to 14%, with the Greens up one to 14%. This cancels out on two-party preferred, which is unchanged at 51-49 in Labor’s favour on both the respondent-allocated and previous-election two-party preferred measures. The major parties’ loss of support isn’t reflected in the personal ratings, with both leaders up two on approval (47% for Malcolm Turnbull, 43% for Bill Shorten) and steady on disapproval (42% for Turnbull, 47% for Shorten). Turnbull’s lead as preferred prime minister narrows from 49-31 to 48-34. The live interview phone poll was conducted Tuesday to Thursday from a sample of 1437.

ReachTEL’s weekly marginal seat poll is a disappointing result for Labor, showing Liberal member Ken Wyatt retaining a 53-47 lead in his eastern Perth seat of Hasluck, suggesting a modest swing to Labor of 3%. Forced preference primary vote results are 46.1% for Ken Wyatt (46.2% at the 2013 election, post-redistribution) and 32.6% for Labor candidate Bill Leadbetter (29.2% for Labor in 2013). The Greens are on 13.5%, up from 10.7% in 2013, much of which comes from the forced response follow-up question asked of the undecided. The Greens got 10.9% on the first round question, but 21.1% of those who responded as undecided favoured the Greens on the follow up. The two-party headline is from respondent-allocated preferences, but 2013 election preferences would have produced the same result. The poll was conducted last night from a sample of 753.

• A ReachTEL poll commissioned by GetUp! suggests Rob Oakeshott is looking competitive in his bid to unseat Nationals member Luke Hartsuyker in the seat of Cowper in the Mid North Coast region of New South Wales. Inclusive of forced preferences, the primary votes are Hartsuyker 42.6%, Oakeshott 25.6%, Labor 14.0%, Greens 8.4%, Christian Democrats 4.5%, others 4.9%. Hartsuyker would likely get over the line after preferences on those numbers, but only by a few per cent. The poll was conducted on Monday from a sample of 842.

• Roy Morgan has released details results of its polling conducted from April to June in South Australia – a little too detailed in fact, since results are provided at electorate level from samples of only 180 each. Taken in aggregate, the Nick Xenophon Team is at 21.5% statewide, which would score them three seats based on Kevin Bonham’s modelling. There is no clear indication of major geographical variation in the NXT vote, as was the case with Xenophon’s Senate vote in 2013.

• Another Morgan report repeats the electorate-level voting intention exercise for the seven seats recording the highest levels of Greens support, which suggests their primary vote to be slightly higher than Labor’s across Melbourne, Batman and Wills, but a) it’s hard to read much into this given the sample size, and b) Morgan has long been reporting excessive-looking results for the Greens. The report also tells us that Labor led 51-49 in Morgan’s regular polling over the fortnight, unchanged on the previous result, which didn’t get the usual published result this week for some reason.

UPDATE: Here is an update of BludgerTrack with the two latest polls, whose peculiarities have essentially cancelled each other out. The Coalition is up a seat in Queensland, but down two in New South Wales. 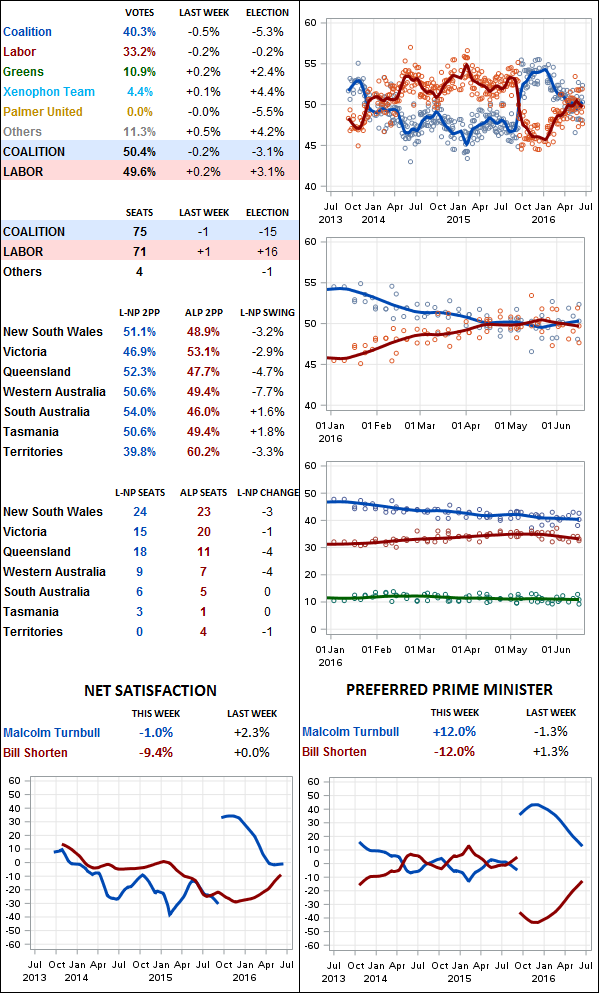 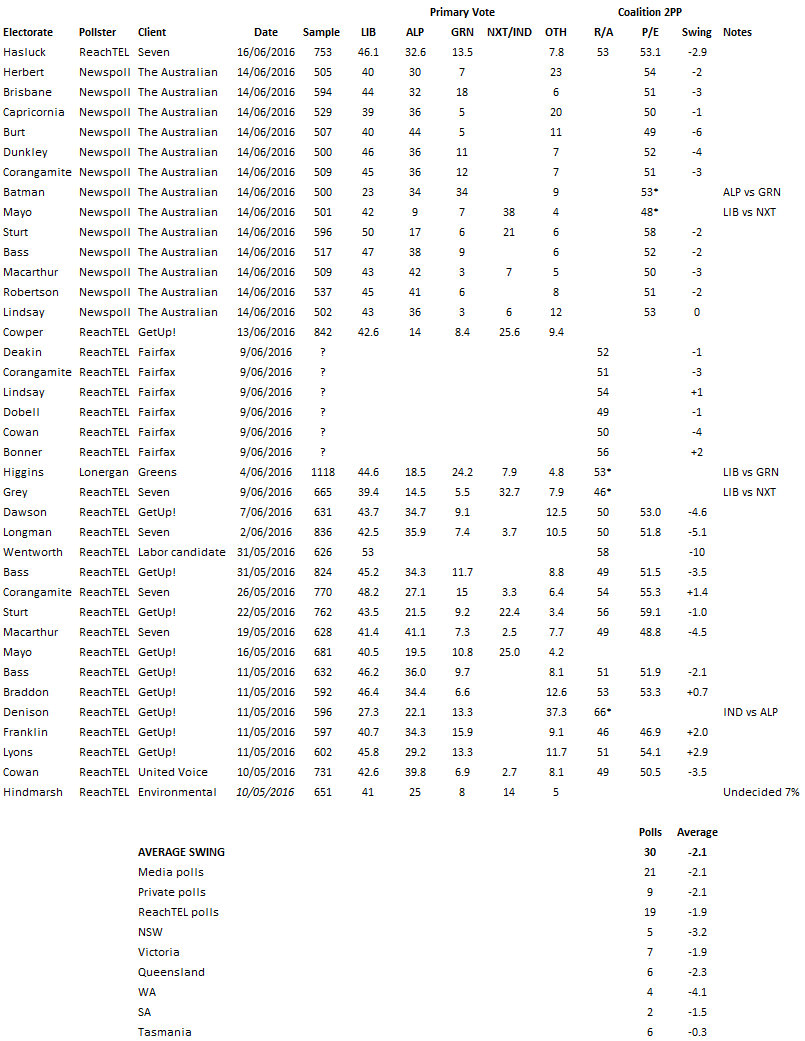