Essential Research’s latest result records the gentlest of nudges in favour of Labor, but the BludgerTrack poll aggregate has gone the other way.

It’s been an oddly quiet week on the national polling front, though no doubt the coming fortnight will more than make up for it. Besides the regular weekly campaign ReachTEL poll for Seven, the only new result is the latest fortnightly rolling average from Essential Research, out a day later than usual due to the Monday public holiday. This records Labor with a 51-49 lead, returning it to its position before a sudden two-point shift to the Coalition a fortnight ago. The primary votes are Coalition 41% (steady), Labor 37% (up one), Greens 10% (steady) and Nick Xenophon Team 4% (steady). Also featured are personal ratings, which Essential usually does on a monthly basis, but it seems to have picked up the pace to fortnightly for the campaign period. Malcolm Turnbull is down three on approval to 38% and up one on disapproval to 40%, while Bill Shorten is steady on approval at 34%, but down four on disapproval to 40%. Turnbull’s lead as preferred prime minister narrows slightly, from 40-27 to 40-29.

An occasional question on the parties’ attributes records positive movement since March for Labor, whose ratings are up from three to nine points on favourable indicators (the biggest gain being from 30% to 39% on “has a good team of leaders”), and lower ratings on all the negative ones, with the exception of “will promise to do anything to win votes”. The movements for the Liberals are more of a mixed bag, with both positive and negative indicators going up. The one exception is “divided”, something the Liberal Party is now deemed to be by 52% of respondents compared with 61% last time. Other results from the Essential survey include a finding of 47% approval for the superannuation changes in the budget, with disapproval at 22%.

The only other bit of poll news from the last few days has been a Greens-commissioned Lonergan Research poll from the traditionally blue-ribbon Melbourne seat of Higgins, where the Greens appear to be giving Kelly O’Dwyer something to think about. The Greens were on 24.2% of the forced preference primary vote, which would put them in second place for the first time, with O’Dwyer on 44.6%, Labor on 18.5% and the Nick Xenophon Team on 7.9%. O’Dwyer leads 53-47 on respondent-allocated preference. The poll had a large sample of 1118, and unlike ReachTEL’s polls was conducted over two nights, on Friday and Saturday of the weekend before last.

The BludgerTrack aggregate records a reasonably solid tick to the Coalition this week, which is mostly down to a ReachTEL result that would have come out at 52-48 in favour of the Coalition if previous election preference flows had been used, as opposed to the headline result of 50-50. BludgerTrack now shows a more plausible result in Western Australia, although it’s still on the sunny side for Labor compared with what’s coming through anecdotally and in individual seat polls. Since last week’s reading, the Coalition is up two seats in Western Australia and one in Victoria, but they’re down two in Queensland. They are also recording a favourable swing in South Australia, which possibly just shows the two-party model isn’t working there any more. It’s worth noting that the Greens have been losing steam nationally over the past few months, presumably because some of the loose anti-major party vote is being gathered up by the Nick Xenophon Team. 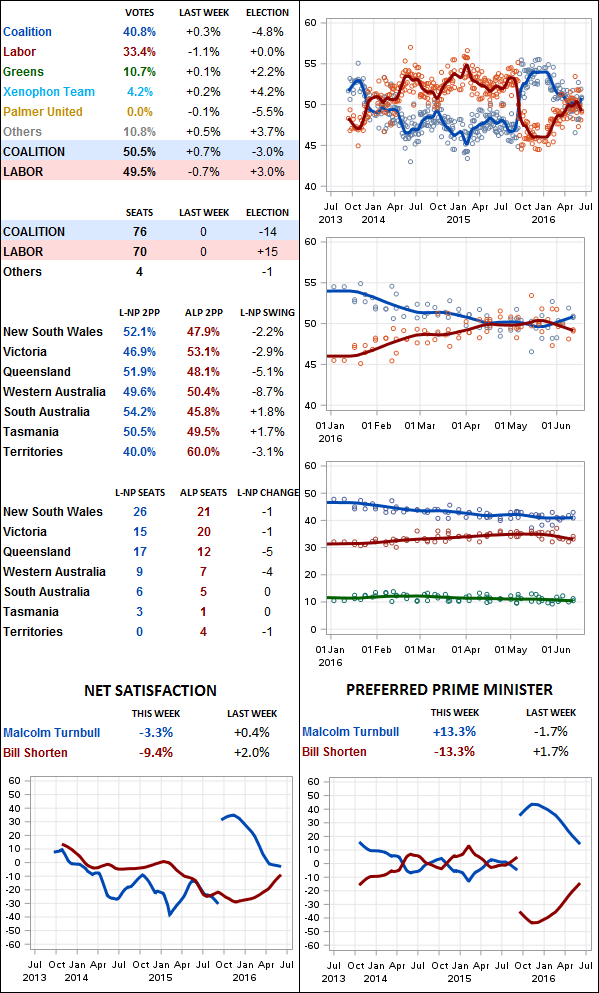