Newspoll’s 50-50 was matched yesterday by Essential Research, and the BludgerTrack poll aggregate continues to say much the same.

BludgerTrack is now updated with all of the federal polling published over the past few days, results of which are displayed at the bottom of this post. As has been the case since at least the start of the campaign period, the tracker is resolute in recording an effective dead heat on two-party preferred, with the seat projection continuing to point towards a slender absolute majority for the Coalition. The latest addition to the aggregate is the weekly reading of Essential Research’s fortnightly rolling aggregate, which echoes BludgerTrack in coming in at 50-50 on two-party preferred. This follows a two-point movement the previous week that turned a 51-49 Coalition deficit into a 51-49 Coalition lead. On the primary vote, the Coalition is steady at 41%, Labor is up one to 36%, the Greens are up one to 9%, and the Nick Xenophon Team is steady on 4%.

Further questions offer some encouragement for Bill Shorten with respect to perceptions of the two leaders during the campaign, although I wonder how good respondents are at isolating that period specifically. The results find 20% saying they have become more favourable towards Shorten versus 21% for less favourable, but these are much better than Malcolm Turnbull’s respective figures of 7% and 33%. Another dose of Essential’s “party trust to handle issues” records a big drop in the Coalition’s lead on managing the economy since a month ago, down from 20% to 12%, with most other measures remaining fairly stable. An occasional question on climate change records a four point drop since March in those attributing it to human activity to 59%, and a one point increase in those favouring the alternative option of it being “a normal fluctuation in the earth’s climate” to 28%. Most of the survey period was before large parts of Sydney’s northern beaches crumbled into the sea. Further questions confirm the impression that the electorate has been less than fully switched on during the first half of the campaign marathon, with only 14% claiming to have shown a lot of interest in the campaign, compared with 39% for some interest, 27% for very little interest and 18% for no interest.

• Labor’s candidate in Malcolm Turnbull’s seat of Wentworth, Evan Hughes, has provided Fairfax with results of a ReachTEL poll he commissioned showing a 10% swing against Turnbull, reducing his margin from 18% to 8%. The poll was conducted last Tuesday from a sample of 626.

• Steven Scott of the Courier-Mail reports Labor optimism about the regional Queensland seats of Capricornia and Herbert is not matched for the state’s capital. The northern suburbs seat of Petrie, held by the LNP on a margin of 0.5%, is identified as a seat where Labor is falling short. A similar prognosis was offered in my own paywalled article in Crikey on Thursday.

• More of my words of wisdom on the campaign can be found on a podcast for The Conversation, and in a review of northern Tasmania’s flood-stricken marginal seats in a paywalled Crikey article yesterday.

• Mark the Ballot tracks Sportsbet’s win probabilities for all 150 electorates to the start of the campaign. Sportsbet has substantially revised its odds over the course of the campaign in favour of the Liberals in Banks, Hindmarsh and Lyons, the Liberal National Party in Leichhardt, the Greens in Batman, Labor in Cowan, and Bob Katter in Kennedy.

• An alleged promise by South Australian property developer Roostam Sadri to donate $500,000 to the Liberal Democratic Party in exchange for the top position on its South Australian Senate ticket has been referred to police by the Australian Electoral Commission, as reported yesterday by Josh Taylor of Crikey. This followed last week’s publication by Fairfax of an apparent written agreement to that effect. Sadri denies having paid such an amount, or that there was ever a “formal agreement”. The section of the Electoral Act pertaining to bribery offences provides, with helpful exactitude, that “a person shall not ask for, receive or obtain, or offer or agree to ask for, or receive or obtain, any property or benefit of any kind, whether for the same or any other person, on an understanding that the order in which the names of candidates nominated for election to the Senate whose names are included in a group in accordance with section 168 appear on a ballot paper will, in any manner, be influenced or affected”. Graeme Orr of the University of Queensland’s TC Beirne School of Law notes that Section 362 of the Act states that candidates forfeit their seats if involved in bribery, and that this requires only the civil rather than the criminal standard of proof. This could equally apply to David Leyonhjelm’s bid for re-election in New South Wales as to Roostam Sadri’s run in South Australia, if the Fairfax report’s assertion that Leyonhjelm “considered entering” an agreement was substantiated.

• The Northern Territory News offers a reminder that a territory election looms on August 27, and the Northern Territory News offers a helpful reminder with a Mediareach poll of 400 respondents in the Alice Springs electorates of Araluen and Braitling. The pollster appears to have failed to ask a follow-up question to prompt the 23% undecided, rendering it of little value, but it’s presumably instructive that less than 40% of decided respondents said they would vote for the Country Liberal Party, compared with 68% at the 2012 election.

• The Sydney Morning Herald reports the NSW Electoral Commission is investigating allegations of vote-rigging during Labor’s American primary-style “community preselection” process for the seat of Ballina ahead of last year’s state election. It is alleged that a party official used details on enrolled voters from the party’s database to fraudulently vote on their behalf during the online ballot, although the unnamed official is quoted saying he had merely “played along” when asked to do so by persons unidentified. The proposed beneficiary was the favoured candidate of head office and the ultimate victor in the preselection, Paul Spooner, with no suggestion that Spooner himself was involved. The formerly Nationals-held seat went on to be won by the Greens. 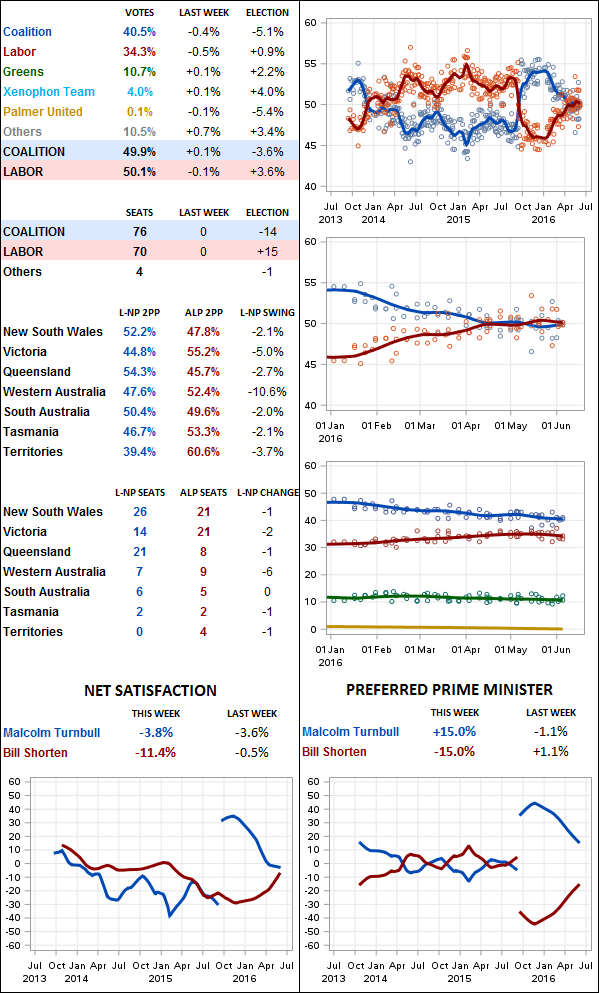