Movement in the Coalition’s favour on the primary vote from ReachTEL, but their enthusiasm will be tempered by an alarming result from the South Australian seat of Grey, where Rowan Ramsey is under the pump from the Nick Xenophon Team.

ReachTEL has produced another lineball result on two-party preferred for the Seven Network, which stays at 50-50 after moving from 52-48 in Labor’s favour the week before. However, the poll offers some encouragement for the Coalition in having them up and Labor down on the primary vote for the second week in a row, and the two-party result would have rounded to 52-48 in their favour if 2013 election preference flows were applied, as ReachTEL did until quite recently. Labor was able to retain parity in the headline result through a still greater flow of respondent-allocated minor party and independent preferences, which already looked stronger than plausible.

Of perhaps even greater interest than the national result is the regular weekly supplementary marginal seat poll, which credits the Andrea Broadfoot of the Nick Xenophon Team with a 54-46 two-party lead over Liberal member Rowan Ramsay in the electorate of Grey, which covers South Australia’s “iron triangle” of Whyalla, Port Augusta and Port Pirie, together with the state’s remote areas. Inclusive of the forced preference results, the primary votes are Liberal 39.4%, Nick Xenophon Team 32.7%, Labor 14.5% and Greens 5.5%, with around three-quarters of preferences flowing to Broadfoot. The poll was conducted last night from a sample of 665.

UPDATE: BludgerTrack updated with the ReachTEL result below. As BludgerTrack is going off 2013 election preferences, it’s treating this poll as being close to 52-48 in the Coalition’s favour, and there has accordingly been a significant shift in that direction on two-party preferred. However, it’s only yielded one extra seat on the seat projection because of some fairly substantial changes in the state-level results. This is because I’ve only just now added the state results for the last two ReachTEL polls, because their new practice of reporting undecided results presented an accounting difficulty that I’ve only now attended to. The inclusion of these numbers has makes little difference in New South Wales, pares the Coalition back in Queensland, and inflates them in the other four states. In seat terms, this knocks three off their tally in Queensland, and adds two in Western Australia (corrected what looked like an excessive result there earlier) and one each in Victoria and Tasmania. 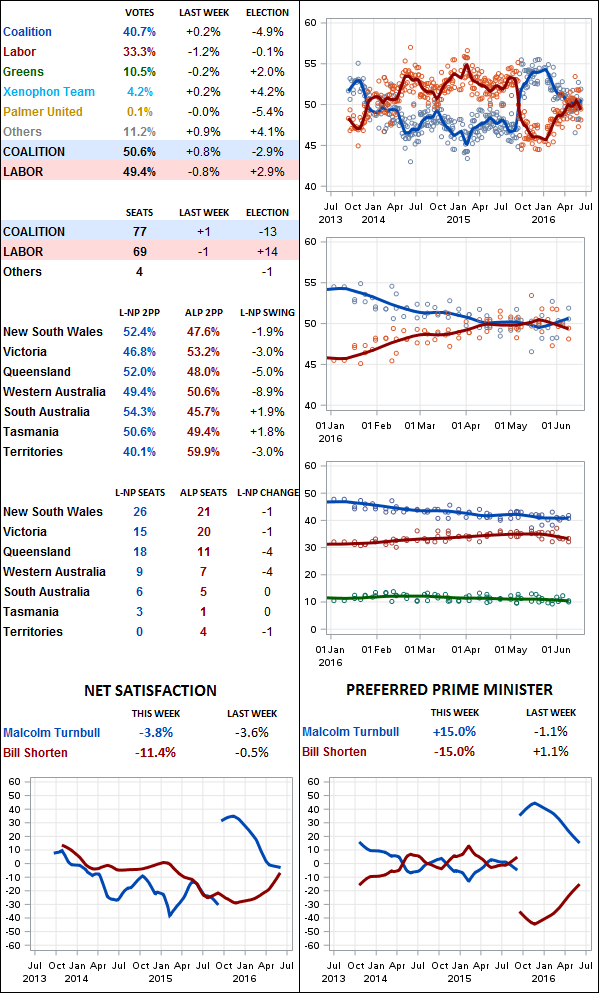