A detailed seat-by-seat look at the results for the 15 seats of inner Sydney at the May 21 federal election.

Way back on June 9, I launched the Call of the Board series that promised to progressively shine a light on the results for all 151 seats at the May 21 election. This started with the target of opportunity of the Northern Territory, then in the news because Anthony Albanese had blamed a gutting of Australian Electoral Commission resources for low turnout and a consequent near-defeat for Labor in Lingiari (not coincidentally, the just-launched parliamentary inquiry into the election will pay special attention to “encouraging increased electoral participation and lifting enfranchisement of First Nations People”). Since then though, I’ve done nothing. But now the ball starts rolling for real, starting with the core of the Australia’s premier (for now) city.

The Australian Electoral Commission classifies fifteen of Sydney’s seats as “inner metropolitan”, and these will be the focus of this post. The image below shows colour-coded representations of their booth results, with two-party preferred on the left and the swing on the right. Being two-party measures, these boil the contests down to Labor-versus-Liberal, including in the four seats where the final preference counts were between independents and Liberals (which get a map of their own further below) and the two that were Labor versus the Greens (Sydney and Grayndler). 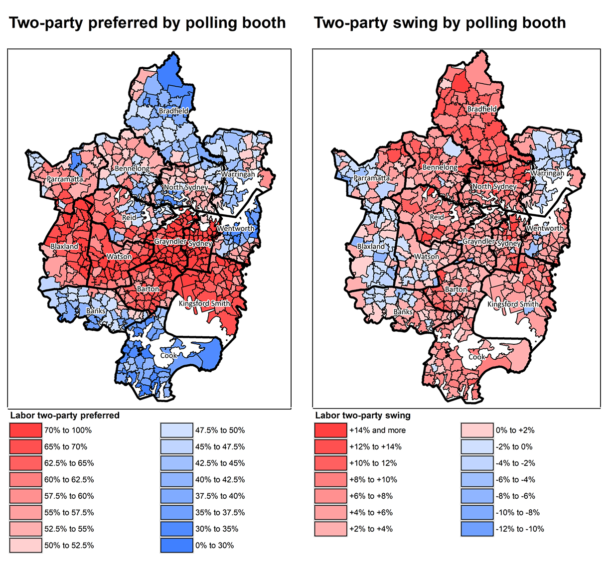 Going into the election, Liberal and Labor held seven of these seats apiece, the other being Warringah, which independent Zali Steggall won from Tony Abbott in 2019. Coming out, the Liberals were reduced to three after losing Bennelong and Reid to Labor and Wentworth and North Sydney to independents. As shown in the map on the left, Labor continues to dominate a swathe of Sydney’s inner south, while the Liberals lost their grip immediately to the north. But as future instalments will more fully reveal, the picture further afield was more complicated, a premonition of which is provided by the small Liberal swings indicated by patches of blue at the westward end of the swing map.

This post will first consider the classic Labor-versus-Liberal contests out of the fifteen in alphabetical order, then turn its attention to the four seats in which the final preference counts were between Liberals and independents.

Banks (Liberal 3.2%; 3.1% swing to Labor): While the two-party swing in Banks was almost perfectly in line with the statewide result, it can be deemed another strong result for Liberal member David Coleman given the seat ranks sixth in the country for Chinese language speakers, concentrated around Hurstville in the electorate’s east. The rest of the top ten collectively swung to Labor by 6.8%, and included three seats gained by Labor (Bennelong, Reid and Chisholm) and one gained by a teal independent (Kooyong). He may have benefited from an apparent tendency for parts of Sydney that were hit hardest by COVID-19 restrictions to record elevated support for the United Australia Party and modest two-party swings to the Liberals, applicable here in the Canterbury-Bankstown municipality at the western end of the electorate. Coleman became the first Liberal to hold the seat in a history going back to 1949 when he gained it in 2013, and he has outperformed the state swing each time, albeit just barely this time and in 2013. In between he suffered a 1.4% swing in 2016 and gained a 4.8% swing in 2019, which compared with statewide swings of 3.8% to Labor and 1.3% to the Coalition.

Barton (Labor 15.5%; 6.1% swing to Labor): Linda Burney gained Barton for Labor in 2016 after a redistribution turned one-term Liberal member Nick Varvaris’s 0.3% margin from 2013 into a notional Labor margin of 4.4%. The swing to Burney on her debut was almost exactly in line with the statewide result, but she has substantially outperformed it twice since, gaining a 1.1% swing against the trend of a 1.3% swing to the Coalition in 2019, and now a 6.1% swing compared with 3.2% statewide.

Bennelong (LABOR GAIN 1.0%; 7.9% swing to Labor): One of ten seats nationally gained by Labor from the Liberals, and one of three in New South Wales, Labor candidate Jerome Laxale’s win in Bennelong was no doubt assisted by the retirement of Liberal member John Alexander, who had held the seat since 2010. Bennelong boasts the nation’s second highest share of Chinese language speakers after Chisholm in Melbourne, and was one of three out of the top ten to be gained by Labor together with Chisholm and Reid (see below). Labor’s only previous win in a seat that was created in 1949 was the famous occasion of John Howard’s defeat in 2007, another election at which Labor was thought to have done particularly well out of the Chinese community, on that occasion because of Kevin Rudd’s fluency in Mandarin. John Alexander recovered the seat for the Liberals in 2010 and retained solid margins through the Coalition’s three successive elections wins in 2013, 2016 and 2019.

Blaxland (Labor 14.9%; 0.2% swing to Labor): The soft swing to Labor in this seat was, as noted, typical for those parts of Sydney that were hardest by COVID-19 restrictions, as was the relatively solid 6.3% vote for the United Australia Party. However, it did nothing to disturb Jason Clare’s hold on what remains a safe Labor seat.

Cook (Liberal 12.4%; 6.6% swing to Labor): The defeated Prime Minister was not spared the lash in his own seat, suffering swings of 8.2% on the primary vote and 6.6% on two-party preferred. These exceeded the norm in what is, the AEC’s classification aside, an outer suburban seat.

Grayndler (Labor 17.1% versus Greens; 0.7% swing to Labor): By a happy coincidence, I follow the seat with the outgoing Prime Minister with that of the incoming one. The Greens made the final preference count in Anthony Albanese’s inner-city seat for the fourth time out of the past five elections, the exception being 2013, and did so with their most comfortable margin yet over the Liberals, whose primary vote fell 5.8% to 16.0%. This did not trouble Albanese, who has now scored primary vote majorities at two successive elections after failing to do so at the previous three.

Kingsford Smith (Labor 14.9%; 5.7% swing to Labor): Labor has held this Maroubra-based seat since its creation in 1949, but its hold looked shaky at its electoral nadir in 2013. However, a 5.7% two-party swing to Matt Thistlethwaite has now pushed the margin to double digits for only the second time since 1998. The result reflected broader inner metropolitan trends both in a poor performance by the Liberals, whose primary vote was down 7.8%, and a strong one for the Greens, who were up 4.7%.

Parramatta (Labor 4.6%; 1.1% swing to Labor): Although the swing was below the statewide par, new Labor member Andrew Charlton scored a comfortable win in a seat the Liberals had high hopes for after the retirement of Julie Owens. Owens gained the seat for Labor in 2004 and racked up a fairly strong electoral record thereafter, although her margin was cut from 7.7% to 3.5% amid Labor’s unexpectedly weak show in 2019. Labor’s strongest swings were notably concentrated around Carlingford at the eastern end of the electorate, home to a large Chinese community.

Reid (LABOR GAIN 5.2%; 8.4% swing to Labor): An emphatic win for Labor’s Sally Sitou after the seat was held throughout the Coalition’s period in government by Fiona Martin. Craig Laundy became the seat’s first ever Liberal member in 2013 before being succeeded by Martin in 2019, the seat’s complexion having twice been changed in the party’s favour by redistributions in 2007 and and 2013. The seat with the country’s fifth highest concentration of Chinese language speakers punished Martin with a 10.4% cut to her primary vote, with booth swings notably strongest in the community focal points of Burwood and Strathfield in the electorate’s south.

Sydney (Labor 16.7% versus Greens): A 1.4% primary vote swing to Tanya Plibersek was sufficient to deliver her a primary vote majority for the first time since her debut in 1998. A well-monied central business district had previously provided the Liberals with enough support to keep them in second place, but broader inner metropolitan trends asserted themselves with enough force to close the gap for the first time, with the Greens up by 4.9% and the Liberals down by 6.9%.

Watson (Labor 15.1%; 1.6% swing to Labor): Tony Burke’s seat straddles an inner city that swung still further to the left and a middle suburbia that recorded a status quo result, with booths at its eastern end swinging slightly to Labor and those in the west a mixed bag. The United Australia Party recorded a solid 7.1%, their fourth best result in the state. 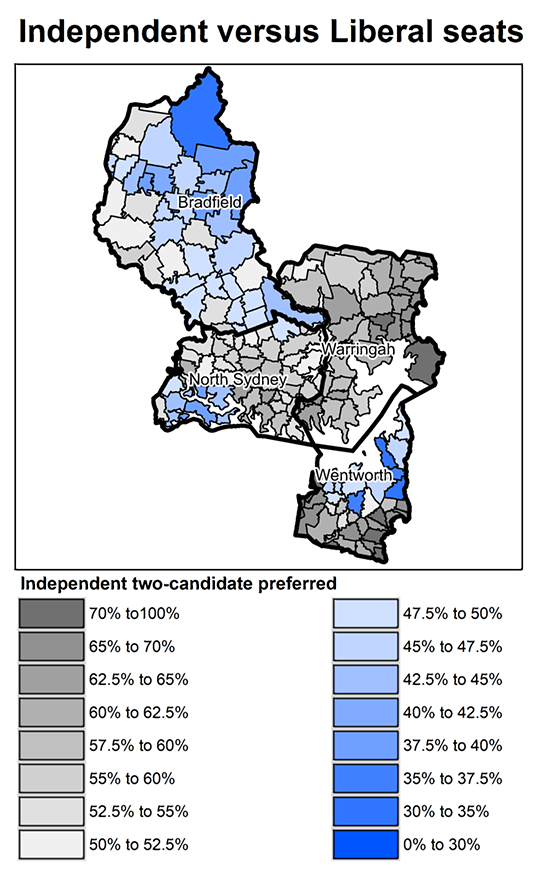 Bradfield (Liberal 4.2% versus Independent): One symptom of a teal independent wave that exceeded even high expectations was that little-heralded independent Nicolette Boele eclipsed Labor by 20.9% to 17.5% in Bradfield, then reduced Liberal member Paul Fletcher to a margin of 4.2% after preferences in his hitherto impregnable seat. Boele won a good many of the booths, but the 14,600 postal votes sealed the deal for Fletcher by breaking 60.8-39.2 in his favour. A side-effect of the backlash against the Liberals was a 10.0% swing on the Liberal-versus-Labor two-party preferred measure, reducing the margin to 6.5%, putting it inside double figures for the first time since the seat’s creation in 1949.

North Sydney (INDEPENDENT GAIN 2.9% versus Liberal): North Sydney was the only one of the teal independent seats in which it was thought Labor might stand a chance, but independent victor Kylea Tink comfortably outpolled Labor candidate Catherine Renshaw by 25.2% to 21.5% on the primary vote, then rode home over Liberal member Trent Zimmerman by 2.9% after preferences. Zimmerman won booths away from the inner city at the western harbourside end of the electorate.

Warringah (Independent 11.0% versus Liberal; 3.7% swing to Independent): The exact effect of any drag upon the vote by contentious Liberal candidate Katherine Deves is hard to read, given Zali Steggall was unique among the teal independents in contesting her seat as a sophomore incumbent. Nonetheless, it may be notable that the two-party preferred swing to Labor was a relatively subdued 0.7% (observe the anomalous blue in the two-party swing map at the top), suggesting a voter backlash specific to Tony Abbott in 2019, whereas Steggall picked up a swing after preferences of 3.7%. This leaves her with a double-digit margin, whereas the six newcomer teals hold margins of between 1.3% and 4.2%. As in 2019, her strongest booths were around Manly, and her weakest were in the electorate’s north-west.

Wentworth (INDEPENDENT GAIN 4.2% versus Liberal): The harbourside booths remained true to defeated Liberal member Dave Sharma, but independent Allegra Spender swept home on the back of strong majorities in the inner-city booths and the electorate’s south. Kerryn Phelps won the seat at the October 2018 by-election with 29.2% of the primary vote but failed to retain it amid a less crowded field at the 2019 election despite improving her vote to 32.4%; with a similar number of candidates this time, Allegra Spender scored 35.8%, while Sharma’s vote slumped from 47.4% to 40.5%. This compares with the 63% share of the vote Malcolm Turnbull recorded in the seat in 2013 and 2016.

20 comments on “Call of the board: inner Sydney”