The Albanese government has made it apparent over the past few days that it has a substantial agenda of electoral reform in mind, which it will hopefully do a better job of delivering on than the last Labor government. My main focus here is on the Prime Minister’s announcement on Friday that the government will look at reciprocating an existing arrangement where voting rights are granted to Australians resident in New Zealand for more than a year, along with other measures designed to smooth relations with New Zealand and otherwise drop the previous government’s obnoxious attitude.

Voting in Australia has been restricted to citizens since an earlier requirement of British subjecthood plus six months’ residency was dropped in 1984, grandfathered so as not to remove existing rights from a now dwindling band of mostly British and New Zealander non-citizens. New Zealand, however, has since 1975 granted voting rights to permanent residents, which raises the question as to why the Albanese government’s proposal should be limited to New Zealanders in particular.

When changes to electoral laws are on offer, it always pays to consider how those proffering them might stand to benefit — and I dare say there have been suggestions in right-wing media spaces over the past few days of a Labor plot to preserve its hold on power by unleashing legions of foreign dole bludgers upon our electoral roll. With this in mind I set to work on the Australian Bureau of Statistics’ TableBuilder census data facility to get a detailed look at the demographic characteristics of New Zealand-born non-citizens, only to learn the hard way that they are yet to stock it with data from last year’s census.

Having made do instead with results from 2016, I have produced the chart below comparing population percentages among those aged 20 and over by weekly personal income. The only evidence for the stereotype is that 7.0% of New Zealand-born non-citizens report negative or no income compared with 5.5% for Australian citizens — that aside, our New Zealanders actually tend to be fairly affluent, particularly in the upper-middle part of the range. 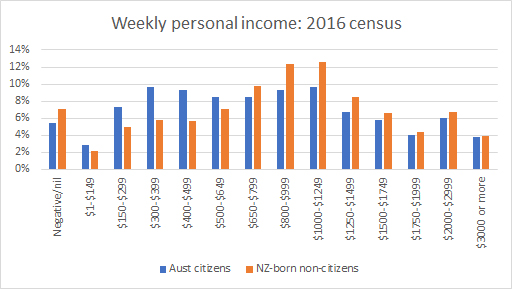 A second chart showing the respective age distributions of Australian citizens and New Zealand-born non-residents offers strong hints as to why this is so: many New Zealanders are here for work purposes, and are thus under-represented at both the young and the old end of the scale. The main reason to think adding them to the electoral roll would be to Labor’s benefit is that few are among the older cohort that uniquely remained loyal to the Coalition on May 21. 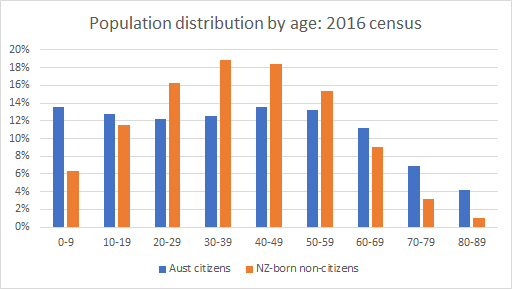 Also significant is the uneven geographic spread of the New Zealander population, which was — at least at the time of the 2016 census — concentrated in the resource states of Queensland and Western Australia, where their numbers were respectively equal to 3.8% and 3.4% of the population of Australian citizens. This would add as much as half a quota to Queensland’s population for purposes of determining its House of Representatives seat entitlement, and give Western Australia a reasonably handy fillip as well. Given long term voting patterns in these states, this could give the Coalition a swing to negate the roundabout of Labor’s likely advantage among New Zealand voters. UPDATE: It’s pointed out in comments that this is not the case, since the entitlement is already based on total population without regard to citizenship.

The table below shows the 20 top ranked electorates for New Zealand-born non-citizens, remembering that this is based on 2016 boundaries. All but one of the seats are in Queensland or Western Australia, and all the Queensland seats are in the state’s populous south-east except the borderline case of Wright, which no doubt owes its presence to the Gold Coast end of the electorate (the Gold Coast triumvirate of Fadden, Moncrieff and McPherson all rank among the top ten).

The work of the Joint Standing Committee on Electoral Matters’ post-election review will not end there, as committee member Don Farrell has today flagged the following:

• Truth-in-advertising laws. The obvious model here is South Australia, where Labor was told to pull ads before the March state election which claimed the state’s ambulance ramping problems were “worse than ever”. It fell to the Electoral Commissioner to determine that this was not strictly true, which is not a role the Australian Electoral Commission is in a hurry to assume. When the Greens’ submission to the JSCEM inquiry after the 2019 election suggested the Australian Competition and Consumer Commission would be better suited for the job, its chair told the inquiry he considered this a “terrible idea”. Labor’s dissenting report to the inquiry said consideration should be given to a “new, independent, election-focused body”.

• Spending caps. If Clive Palmer’s repeated efforts have achieved nothing else, they have made a powerful case for laws that cap the amount specific parties or third party actors can spend on election advertising. Caps have applied in New South Wales since 2010, though the present government hit a hurdle when union-targeted caps on third party expenditure were deemed unconstitutional by the High Court. The current Labor government in Queensland introduced caps before the 2020 election, though Palmer still found ways to dominate the advertising space with attacks on Labor, for all the good it did him. The Coalition has acquired an interest in the matter after Climate 200’s expenditure on the teal independents’ campaigns, but The Guardian reports Liberal federal director Andrew Hirst has signalled that spending caps will likely be opposed by the Coalition.

• A $1000 threshold for public disclosure of political donations. The Howard government used the Senate majority it gained during its final term to hike this from the $1500 at which the Hawke government had set it at 1983 to an indexed $10,000, and it now sits at $15,200. Plans to reduce it to $1000 were the subject of Rudd government legislation that was blocked in the Senate by the Coalition and Steve Fielding of Family First in 2009, and formed part of Julia Gillard’s deal with the Greens after the 2010 election, which for some reason was never acted on.

• “One vote, one value”. Farrell was apparently asked if he supported “spending caps, truth in political advertising and reforms to improve one-vote one-value”, and replied the all were “in our party policy” and that government would be “producing legislation at some point”. Specifically on the last point, The Guardian reports the committee would be directed to “see what solutions they come up with”. Given constitutional constraints, it is difficult to see that further progress could be made on this front without going down the politically difficult path of enlarging parliament. The Guardian’s report notes suggestions the territories might be granted extra seats in the Senate, but the territories are not in fact under-represented in either house.