Random notes: a WA only poll on coronavirus, some detail on the elections in Queensland last Saturday, and a look at Donald Trump’s counter-intuitive poll bounce.

The West Australian had a Painted Dog Research poll of 500 respondents on attitudes to the coronavirus, with field work dates undisclosed – or at least its website did, as I can’t see any mention of it in the hard copy. What the online report ($) tells us is that 71% believed the federal government should “enforce a full lockdown”; that 25% expected three months of social distancing, and 23% six months; that 18% were extremely worried about losing their job by September, with another 42% slightly worried; and that 68% were most concerned about the health impact, compared with 28% for the economic impact.

Other than that, I have the following to relate about Queensland’s elections on the weekend, which I’ll put here as the dedicated post on the subject doesn’t seem to be doing much business:

• As the dust settles on the troubled counting process, it’s clear the Liberal National Party has enjoyed something of a triumph in the election for Brisbane City Council, extending their 16-year grip on the lord mayoralty and quite probably repeating their feat from 2016 of winning 19 out 26 wards on the council. Incumbent Adrian Schrinner leads Labor’s Pat Condren in the lord mayoral race by a margin of 5.5%, although the latter gained a 4.0% swing off Graham Quirk’s landslide win in 2016. The ABC projection is awarding 17 ward seats to the LNP, to which they look very likely to add Enoggera, while maintaining a slender lead over the Greens in Paddington. The Greens’ combined council ward vote is up 3.4% on 2016 to 17.9%, and they retained their sole existing seat of The Gabba with swings of 12.2% on the primary vote and 8.5% on two-party preferred.

• However, it was a less good performance by the LNP in the two state by-elections, where all the detail is laid out at my results pages for Bundamba and Currumbin. The party finished a distant third behind One Nation in Bundamba, which remains a safe seat for Labor, and have only narrowly held on in Currumbin, where Labor has achieved a rare feat for a governing party in picking up a swing of nearly 2% at a by-election. Party leader Deb Frecklington would nonetheless be relieved by the result, since a defeat in Currumbin, which a pre-election poll suggested was in prospect, would surely have imperilled her leadership, despite her being able to point to the highly unusual circumstances in which the election was held.

• Speaking of which, I offer the following numbers on the ways the enrolled voters of Bundamba and Currumbin did and didn’t vote, with the qualification that there is an indeterminate number of postals still to be counted — perhaps rather a few of them, given I understood that there had been a surge in applications (although it seems a number of applicants never received their ballots).

Finally, a few thoughts on the situation in the United States, elaborating on a subject covered in yesterday’s post here by Adrian Beaumont – you are encouraged to comment on that thread if you have something specific to offer on matters American, and in particular on Donald Trump’s confounding opinion poll bounce over the past few weeks. I sought to put the latter event in context in a paywalled Crikey article on Monday, the key feature of which is the following comparison of his approval rating trend, as measured by FiveThirtyEight, with comparable trend measures of my own for Angela Merkel, Boris Johnson, Emmanuel Macron and Scott Morrison. 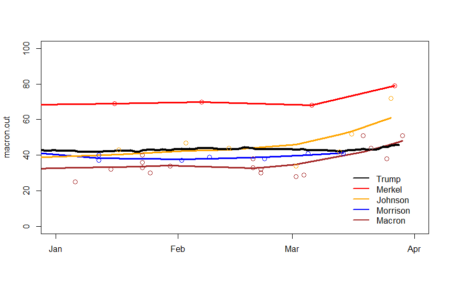 The upshot is that leaders the world over are enjoying a “rally around the flag” approval bounce, and that Donald Trump’s looks meagre indeed compared with his colleagues across the Atlantic. I feel pretty sure that the lack of a clear bounce for Scott Morrison is down to the fact that there have been no new numbers since Essential Research’s poll of over a fortnight ago, with the surges for Merkel, Johnson and Macron being concentrated since that time.

It’s also interesting to observe that Trump’s improvement has not been consistently observed. The chart below records his trends so far from this year from the five most prolific pollsters. For some reason, Rasmussen, the pollster that is usually most favourable to him — and which is accordingly the most frequent subject of his vainglorious tweets on the odd occasion when it reaches 50% — has in fact found his approval rating going in the direction he deserves. There is also no sign of change from the Ipsos series. However, the improving trend from the other three is more in line with the many other pollsters included in the FiveThirtyEight series, hence its overall picture of his best ratings since his post-election honeymoon. 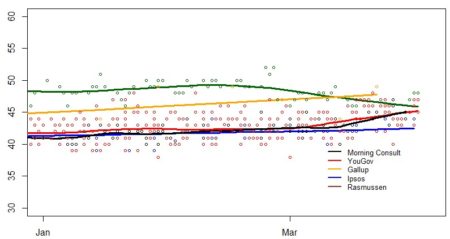 2,303 comments on “Something for the weekend”