The lower-educated appear likely to sink Labour in Thursday’s UK election. Also featured: a guide to how the results will come in on Friday (our time).

Guest post by Adrian Beaumont, who joins us from time to time to provide commentary on elections internationally. Adrian is an honorary associate at The University of Melbourne. His work on electoral matters for The Conversation can be found here, and his own website is here.

Donald Trump was in the UK from December 2-4, and there was a head-to-head debate between Boris Johnson and Jeremy Corbyn on December 6. Polls listed above were taken after the Trump visit, and Johnson won the leaders’ debate by 52-48 in a YouGov “insta poll”.

In the latest YouGov poll, the Conservatives hold leads of 39-34 with the ABC1 social grade (upper to middle class), but by 48-31 with C2DE (working class). Sky’s Lewis Goodall has qualitative research into Labour’s problems with lower-educated voters. Facebook ads have damaged Corbyn’s popularity with these voters. The Conservative message that Labour has blocked Brexit is cutting through.

While Corbyn has a problem with the lower educated, he’s far from unique. Centre-left parties had unexpectedly dismal results in the UK (2015), US (2016) and Australia (2019), owing to swings towards conservative parties among the lower educated.

There are probably two ways for the global left to start winning elections consistently again. One is via a deep economic recession. The other way is via demographic change. Since 1940, educational attainment among those aged 25-29 in the US has surged. As the population becomes better-educated, the left is likely to do better – but not for a long time.

A hope for UK Labour is that Johnson’s ratings in an Ipsos poll slumped 22 net points to -20 since November, while Corbyn was up 16 to -44. Something could go wrong for the Conservatives with Johnson that unpopular. In YouGov, Johnson’s net approval was down nine points since last fortnight to -13, Corbyn down five to -47 and the Liberal Democrats’ Jo Swinson down 18 to -36.

As I wrote previously, there are three ways Labour could defy the polls. A fourth can be added: late deciders. While the Conservatives lead by 43-33 in YouGov, they only lead by 33-26 including “won’t vote” (8%), “don’t know” (13%) and “refused” (3%). If late deciders break to Labour, it will be closer than current polls suggest.

UK polls are open from 7am to 10pm Thursday local time. Unlike Australia, where small booths report quickly, the UK has no counting by booth. Instead, votes from all booths within a seat are transported to a central counting centre, and counted there. Postal votes must arrive by election day. Barring a recount, seats are declared once the vote count finishes. It takes far longer to get a good idea of the result than in Australia.

To follow their elections, the British need to pull an all-nighter. In Australia it’s easier, with polls closing at 9am Friday Australian Eastern Daylight Time (AEDT). Here is my guide to the events in Australia; all times are Friday AEDT.

11am: According to this article about the 2017 election, only three of 650 declarations are expected by this time.

1pm-3pm: These two hours should be the heaviest for declarations.  Initial results will be biased to Labour as the Conservative heartland regional seats take longer to gather their votes. The key is to watch the changes in vote share, and whether seats are being gained or lost.

6pm: Only a few seats will not be declared by this time. Very close seats can take longer to declare owing to recounts. If there’s snow on the roads, results will be delayed.

Below is an update of the poll tracker I published on Friday, with nine new polls added. It maintains a trend of steady improvement for Labour at the expense of the Liberal Democrats, while the Conservatives hold steady. The latest trend result is Conservatives 42.7% (up 0.3% on 2017), Labour 33.7% (down 6.3%), Liberal Democrats 12.3% (up 4.9%) and Brexit Party 3.4%. 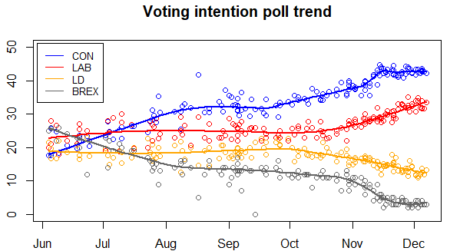