A quick and dirty guide to what pollsters seem to be telling us a week out from an unpredictable British election.

With a week to go until Britain’s election, polls continue to credit the Conservatives with a lead over Labour which, although substantial, is not so great that they can lock in a parliamentary majority. Furthermore, the trend of polling is somewhat in favour of Labour, with the Conservatives apparently having sucked dry the short-lived insurgency of the Brexit Party, while Labour continues to pick off support from the floundering Liberal Democrats. This is illustrated clearly enough in the poll trend chart below, which combines the work of nine polling series. 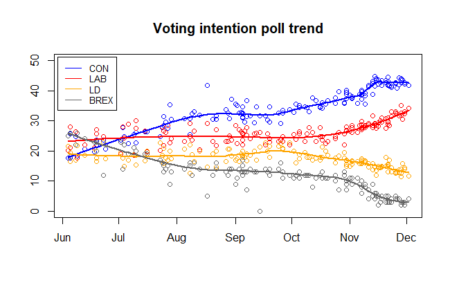 While all the pollsters have the Conservatives well ahead, the size of the lead covers a wide range, from as little as 6% by the reckoning of the most recent poll from BMG to as much as 15% from Opinium. Given the assurance that the Scottish National Party will dominate north of the border, the former end would certainly be weak enough to leave the Conservatives short of the formidable hurdle that either major party must clear if they are to win enough seats in England to score a majority. The next chart shows local area regression trends for each pollster’s reckoning of the Conservative lead (a little more on the methodology is explained later in the post). 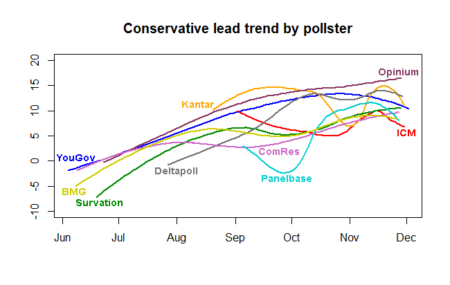 Labour optimists are hanging on to the notion of a pro-Labour “youthquake” that will up-end the pollsters’ turnout models. The importance of the age distribution of the voting population is forcefully illustrated by the chart below, which shows voting intention by age cohort (off very small sub-samples) from a recent poll by ICM Research. 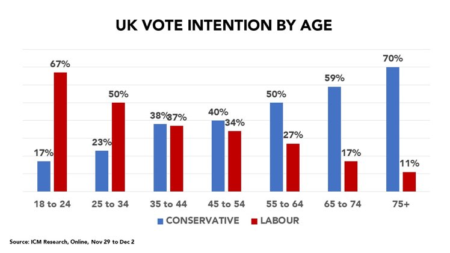 Pollsters are varying quite substantially as to age distribution, as illustrated in the next chart, which has been derived from the weighting data provided as standard from pollsters in the UK (in Australia we can only imagine such things). Kantar looms as an outlier in its expectation that fully 49% of voters will be 55 and over, compared with just 19% for the 18-to-34 cohort. The other pollsters range from 25% to 29% for 18-to-34 and 37% to 43% for 55-plus. None of this has any obvious bearing on the pollsters’ leanings, perhaps with the exception of ICM, whose young age profile has been reflected by relatively modest Conservative leads. 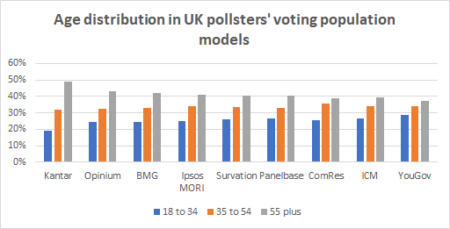 Then there’s their modelling of the population by vote in the 2016 Brexit referendum, which I’m slightly puzzled by in that there is dramatic variation in the size of the various pollster’s “did not vote” cohort (which appears not to be related to their age distributions). In the cases of YouGov, ComRes, Survation and Deltapoll, I had to infer this total from what was left over after “leave” and ”remain” were removed from the total, which may be causing me to miss subtlety. Whatever the case, let the peculiarity of Kantar again be noted in that it proposes a majority “remain” population, despite having a age distribution that skews old. Conversely, Opinium’s weighting to “leave” may explain its apparent lean to the Conservatives. 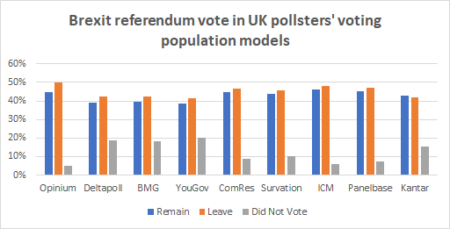 Now for a quick introduction to the British polling fraternity. First up, the following table shows bias adjustments that have been used to standardise the poll trend measures at the top of this post. These were achieved my comparing their results to a straightforward trend measure of all the polls entered into the model (142 polls from nine pollsters). The results are actually fairly modest as these things go, contrary to the impression given by the range of results in the “Conservative lead trend by pollster”. 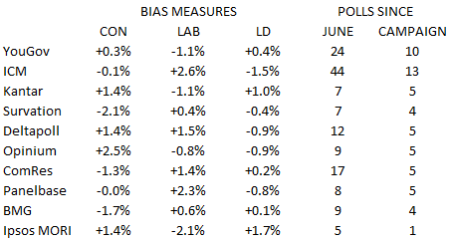 All these polls are of the online panel variety, with two exceptions: Survation, a phone poll, and Ipsos MORI, which despite being a big name has only published one poll since the campaign began. Survation is also unique in that it includes Northern Ireland in its polling, whereas the others stick to England, Scotland and Wales.

The pollsters are variable in how they structure their voting intention responses, particularly in relation to the Brexit Party, which is not running in most Conservative-held seats. Before that they had to struggle with which minor parties to include among the initial list of responses and which as a follow-up for those who chose “other party”. It is routine for the Scottish National Party and Plaid Cymru to be included as topline response options in Scotland and Wales respectively.