Another deep dive into the result of the May federal election – this time focusing on Western Australia, which disappointed Labor yet again.

The Call of the Board wheel now turns to Western Australia, after previous instalments that probed into the federal election results for Sydney (here and here), regional New South Wales, Melbourne, regional Victoria, south-east Queensland and regional Queensland.

Western Australia has been disappointing federal Labor ever since Kim Beazley elevated the party’s vote in his home state in 1998 and 2001, and this time was no exception. After an unprecedented Labor landslide at the 2017 state election and expectations the state’s economic malaise would sour voters on the government, the May election in fact produced a statewide two-party swing of 0.9% to the Coalition, and no change on the existing configuration of 11 seats for the Liberals and five for Labor.

As illustrated by the maps below (click on the images to enlarge), which record the two-party swings at booth level, Perth typified the national trend in that Labor gained in inner urban areas, regardless of their political complexion, while copping a hit in the outer suburbs. This will be reflected in the seat-by-seat commentary below, which regularly invokes the shorthand of “inner urban” and “outer urban” effects. The map on the left is limited to seats that are clearly within the Perth metropolitan area, while the second adds the fringe seats of Pearce (north), Hasluck (east) and Canning (south).

For further illustration, the table below compares each electorate’s two-party result (the numbers shown are Labor’s) with a corresponding two-party Senate measure, which was derived from the AEC’s files recording the preference order of each ballot paper (with votes that did not preference either Labor or Liberal excluded). This potentially offers a pointer as to how much candidate factors affected the lower house results. 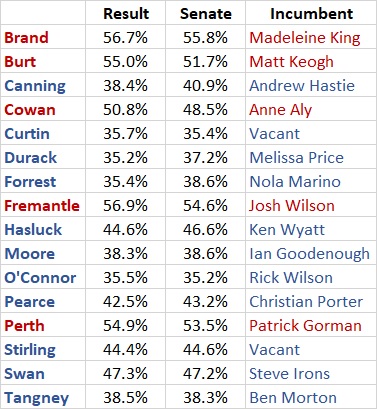 Brand (Labor 6.7%; 4.8% swing to Liberal): Like so many other suburban seats distant from central business districts across the land, Brand recorded a solid swing to the Liberals after going strongly the other way in 2016. This dynamic drowned out whatever impact candidate factors may have had: Labor’s Madeleine King picked up a 7.7% swing on debut in 2016, but this time copped a 4.8% reversal despite theoretically being in line for a sophomore surge. The Senate result was little different from the House, further suggesting candidate factors were not much of a feature.

Burt (Labor 5.0%; 2.1% swing to Liberal): On its creation in 2016, Burt recorded a swing to Labor of 13.2%, the biggest of the election. This partly reflected the dramatic boomtime suburban growth that had caused the seat to be created in the first place, and which has since ground to a halt. The Liberals swing of 2.1% this time was typical for suburbia outside the inner urban zone, overwhelming any sophomore effect for the seat’s inaugural member, Matt Keogh. However, Keogh very substantially outperformed the two-party Senate metric.

Canning (Liberal 11.6%; 4.8% swing to Liberal): Covering Perth’s outer southern fringes, Canning was another seat that typified outer suburbia in swinging heavily to the Liberals, in this case to the advantage of Andrew Hastie. Hastie came to the seat at a by-election held a week after Malcolm Turnbull’s rise to the prime ministership in September 2015, at which he survived a 6.6% swing to Labor, most of which stuck at the federal election the following July. The swing in his favour this time has returned the Liberal margin to the peaks of 2013.

Cowan (Labor 0.9%; 0.2% swing to Labor): Anne Aly gained Cowan for Labor in 2016 by a margin of 0.7%, slightly less than she would have needed to hold out the 0.9% statewide swing had it been uniform. She was in fact able to boost her margin by 0.2%, in a seat slightly out of the range of the wealthier inner urban areas where Labor did best in swing terms. The disparity between the House result and the two-party Senate metric, which records a 1.5% advantage for the Liberals, suggests Aly can take much of the credit for her win, over and above the exercise of the sophomore surge effect.

Curtin (Liberal 14.3%; 6.4% swing to Labor): The most prestigious Liberal seat in the west had a complicated story to tell at this election: Julie Bishop retired after more than two decades as member; the party raised some eyebrows locally by endorsing a Christian conservative, Celia Hammond, despite the seat’s small-l liberal complexion; and Labor initially endorsed former Fremantle MP Melissa Parke, who shortly withdrew after copping static over contentious pronouncements about Israel. An independent, Louise Stewart, held out some promise of harnessing support from Malcolm Turnbull loyalists, but her campaign was torpedoed after polling she circulated showing her well placed to win proved to be fabricated. Stewart claimed to have been the victim of a trick, while the Liberal response to the episode betrayed a certain inconsistency in attitude towards the dissemination of fraudulent documents for political purposes. The loss of Bishop’s personal support and the broader inner urban effect were evident on the scoreboard, with the Liberals down 11.3% on the primary vote and 6.4% on two-party preferred. The Greens continue to fall just shy of edging Labor into second – this time they trailed 17.6% to 15.6% on the primary vote and 20.4% to 19.6% at the last preference exclusion. Louise Stewart finished a distant fourth with 7.8%.

Durack (Liberal 14.8%; 3.7% swing to Liberal): When she first came to the seat covering northern Western Australia in 2013, Melissa Price had to fight off the Nationals, over whom she prevailed by 4.0%. However, she has since gone undisturbed over two elections as the Nationals have fallen to earth. The applecart was upset slightly on this occasion by the entry of One Nation, who scored 9.5%, contributing to respective drops of 4.3% and 5.8% for Labor and the Nationals, while Price’s primary vote rose 2.6%.

Forrest (Liberal 14.6%; 2.0% swing to Liberal): Nola Marino was re-elected with a modest swing amid a generally uneventful result. One Nation and Shooters Fishers and Farmers were in the field this time whereas the Nationals were not, but this was rather academic as the primary votes for all concerned were inside 6%.

Fremantle (Labor 6.9%; 0.6% swing to Liberal): The scoreline in Fremantle was not particularly interesting, with little change on two-party preferred, and downward primary vote movements for the established parties that reflected only a larger field of candidates. However, the results map illustrates particularly noteworthy geographic variation, with the area around Fremantle proper swinging to Labor in line with the inner urban effect, while the less fashionable suburbia that constitutes the electorate’s southern half went the other way (a pattern maintained across the boundary with Brand, where there was a 4.6% swing in favour of the Liberals). Labor member Josh Wilson was in line for a sophomore surge effect, although this was not his first bid for re-election thanks to a Section 44 by-election in July 2018, which passed without incident in the absence of a Liberal candidate.

Hasluck (Liberal 5.2%; 3.2% swing to Liberal): The Liberals’ most marginal Western Australian seat going into the election, Hasluck delivered Labor a particularly dispiriting defeat, with Ken Wyatt securing the biggest margin of his four election career. The swing reflected the general outer urban effect, although Labor did manage to pick up a few swings around relatively affluent Kalamunda.

Moore (Liberal 11.7%; 0.6% swing to Liberal): This northern suburbs beachside electorate is affluent enough to be safe Liberal, but not fashionable enough to have partaken in the inner urban effect. Third term member Ian Goodenough picked up a very slight swing, as the primary vote told a familiar story of the three established parties all being slightly down amid a larger field of candidates.

O’Connor (Liberal 14.5%; 0.6% swing to Labor): Covering the southern part of regional Western Australia, O’Connor was held by the Nationals for a term after Tony Crook unseated Wilson Tuckey in 2010, but Rick Wilson narrowly recovered it for the Liberals when Crook bowed out after a term in 2013, and the Nationals have not troubled him since. One Nation entered the race this time, but managed only a modest 8.4%.

Pearce (Liberal 7.5%; 3.9% swing to Liberal): Among the many Liberal scalps that went unclaimed by Labor was that of Christian Porter, who emerged the beneficiary of the outer urban effect after being widely written off in the wake of the state election landslide and the coup against Malcolm Turnbull. One Nation landed a fairly solid 8.2%, contributing to a solid 5.2% primary vote slump for Labor.

Perth (Labor 4.9%; 1.6% swing to Labor): One of Labor’s few reliable seats in the west, Perth has undergone frequent personnel changes since Stephen Smith retired in 2013, with Alannah MacTiernan bowing out to return to state politics in 2016, and her successor Tim Hammond failing to make it through a full term. This complicates sophomore surge considerations for current member Patrick Gorman, who retained the seat without Liberal opposition at a by-election in July last year. The swing in his favour reflected the inner urban effect, but he also managed to outperform Labor’s two-part Senate metric for the seat.

Stirling (Liberal 5.6%; 0.5% swing to Labor): In a once marginal seat that looked increasingly secure for the Liberals after Michael Keenan gained it in 2004, this election loomed as a litmus test of how secure the party would look when stripped of his personal vote. The results were encouraging for the party, with new candidate Vince Connelly suffering only a slight swing. The results map suggests a pattern in which the beachside suburbs and areas near the city swung to Labor, while the unfashionable area around Balga at the centre of the electorate went the other way.

Swan (Liberal 2.7%; 0.9% swing to Labor): Together with Pearce and Hasluck, Swan was one of three seats in Labor’s firing line, but Steve Irons was able to secure a fifth successive win in what has traditionally been a knife-edge seat. This was despite the pedigree of Labor candidate Hannah Beazley, whose father Kim Beazley held the seat from 1980 to 1996, when he jumped ship for Brand. The results map tells a family story in that the affluent western end of the electorate swung to Labor, while the lower income suburbs in the east went the other way.

Tangney (Liberal 11.5%; 0.4% swing to Liberal): Liberal sophomore Ben Morton held his ground in this safe Liberal seat, despite the riverside suburbia of Applecross and Attadale partaking of the inner urban effect. He gained 4.8% on the primary vote in the absence of former member Dennis Jensen, who polled 11.9% as an independent in 2016 after being defeated by Morton for preselection.

ANNOUNCEMENT: If this painstakingly compiled post interested you enough that you have made it all the way through to the end, perhaps you might care to make a donation. These are gratefully received via the “become a supporter” button that appears just below, or the PressPatron button at the top of the page.

1,840 comments on “Call of the board: Western Australia”