The second in a series that leaves few stones unturned in its exploration of the May 18 election result.

The metropolitan episodes of this series will feature maps and analysis guided by a demographic model to predict seats’ two-party results, so that areas of over- or under-performance might be noted. However, results maps only really work for areas of concentrated population, and it turns out the model works a lot less well when you move away from the cities. In particular, it records historic Labor strongholds in the Hunter and Illawarra as marginal Liberal seats, which I’m guessing results their lack of ethnic diversity, which the model strongly associates with conservatism. This suggests the model needs to be refined with interaction variables to measure the difference in effects between cities and regions, which I’ll hopefully get around to at some point.

Now for the Call of the Board in non-metropolitan New South Wales, broken into four easy pieces.

Newcastle (Labor 13.8%; 0.0% swing to Liberal): The pattern of the capital cities was reflected in Newcastle, the urban core of which swung to Labor while the low density surrounds went the other way. The Newcastle electorate contained exactly as much of each as to cancel each other out, with both major parties down slightly on the primary vote to make way for United Australia and a lift for the Greens.

Shortland (Labor 4.4%; 5.5% swing to Liberal): In neighbouring Shortland, however, Labor emerged with its narrowest margin since the seat’s creation in 1949. There were traces of the inner urban effect at the northern end of the electorate, but the swings elsewhere were severe enough to take 10.0% out of Pat Conroy’s primary vote. Most of that was harvested by new minor party entrants, but the Liberals gained swings of 2.2% on the primary and 5.5% on two-party preferred.

Paterson (Labor 5.0%; 5.7% swing to Liberal): It was a similar story just north of Newcastle in Paterson, where Meryl Swanson, who should have been enjoying at least half a sophomore effect, copped a two-party swing of 5.7%. The primary vote swing of 5.0% was less severe than Shortland because the minor party market was more crowded here in 2016. In particular, this was one of two seats in New South Wales where One Nation ran in 2016, and the only one where they repeated the performance in 2019. Their vote was up from 13.0% to 14.2%, the second strongest of the six New South Wales seats they contested after Hunter.

Hunter (Labor 3.0%; 9.5% swing to Nationals): Labor’s single worst result of the election was Joel Fitzgibbon’s 14.2% primary vote and 9.5% two-party slump in Hunter, reducing his previously formidable margin to 3.0%. The last time Labor was run this close in a seat bearing the name of Hunter was in 1984, and the time before that was 1906. The coal industry effect was unmistakeable: the Newcastle end of the electorate swung about as heavily as the Shortland booths on the other side of Lake Macquarie, whereas the full force landed at Cessnock. The remarkable 21.6% primary vote for One Nation, more than in any seat in Queensland, was fairly uniformly spread geographically. This left them only slightly shy of the 23.5% vote for the Nationals (who, a little oddly in my view, have the right to contest the seat under the coalition agreement), but the gap failed to close on preferences. How close they would have come of overtaking Fitzgibbon at the final count had it been otherwise is a matter for conjecture. 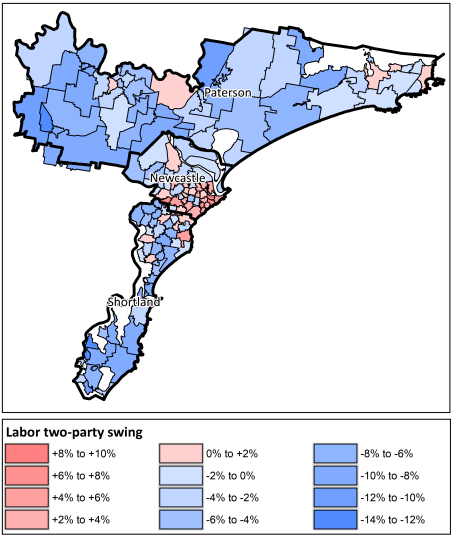 Lyne (Nationals 15.2%; 3.2% swing to Nationals): David Gillespie held almost steady on the primary vote while Labor fell 2.5% and the Greens fell 2.9%, reducing the flow of preferences to Labor. Fact I hadn’t noticed before: the Liberal Democrats can score pretty well in Nationals seats with no Liberal running, in this case 5.8%.

Cowper (Nationals 11.9%; 0.7% swing to Labor): After all the hype about Rob Oakeshott’s prospects, the result was remarkably similar to his failed bid in 2016. Pat Conaghan, who replaces Luke Hartsuyker as the Nationals member, added 1.1% to the party’s vote, scoring 47.1%, while Oakeshott was down 1.8% to 24.5%. That still left him well clear of Labor, up 0.2% to 13.8%, and he landed 6.8% short after preferences, which was 2.2% more than in 2016. The Coalition-versus-Labor two-party count produced a 0.7% swing to Labor, perhaps reflecting Hartsuyker’s retirement.

Page (Nationals 9.4%; 7.1% swing to Nationals): Kevin Hogan, a Nationals member who vaguely kept his distance from the Coalition after the putsch against Turnbull, achieved the biggest margin ever recorded in a seat that has been an arm wrestle since its creation in 1984, the margin never previously exceeding 5%. Hogan was up 5.3% on the primary vote and 7.1% on two-party preferred, the latter being the biggest swing against Labor in New South Wales after Hunter. There were two areas where Labor held its ground: just outside Coffs Harbour at the electorate’s southern extremity, and behind the hemp curtain at Nimbin in the north.

Richmond (Labor 4.1%; 0.1% swing to Labor): As just noted, the area around Nimbin bucked the trend of a heavy swing against Labor in Page. This regional effect was even more pronounced at the Byron Bay end of Richmond, where a number of booths recorded double-digit swings to Labor. Many of these booths are in fact won by the Greens, who only succeeded in treading water overall in the face of competition from Sustainable Australia and Involuntary Medication Objectors (though the latter, critics of this region take note, only polled 1.2%). The Tweed Heads end of the electorate was and is a different kettle of fish, recording low support for the Greens and a two-party swing to the Nationals. With the two ends pulling in different directions, the distinctiveness of the Byron Bay region is further enhanced, as illustrated by the image below (which would naturally tell a similar story for the Greens primary vote). 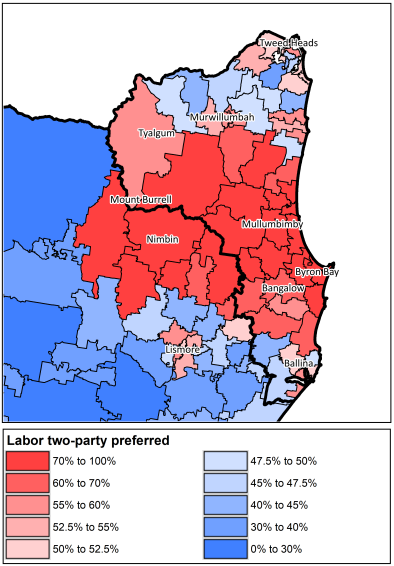 Cunningham (Labor 13.4%; 0.1% swing to Labor): The size of the two-party swing typified a dull result, in which Labor fell slightly on the primary vote, the Liberals were up slightly and the Greens vote hardly changed. The primary vote difference presumably failed to translate into a Liberal two-party swing because the Christian Democrats vacated the field after recording 4.1% in 2016.

Whitlam (Labor 10.9%; 2.8% swing to Nationals): The Liberals made life hell for some of us by declining to field a candidate here and leaving the seat to the Nationals, so that a two-party swing could only be calculated by comparing Labor-Liberal to Labor-Nationals. This the AEC, for one, declined to do. By that measure, Labor’s Stephen Jones suffered a swing of 2.8%. In the Liberals’ absence, the combined Coalition primary vote was down from 32.7% to 25.5% as Liberals unwilling to plump for the Nationals opted for the United Australia Party, whose 8.8% was their second best result in the country after Riverina.

Hume (Liberal 13.0%; 2.8% swing to Liberal): Labor dropped 5.3% on the primary vote here, though it went to independent Huw Kingston and the United Australia Party rather than Liberal member Angus Taylor, who was down slightly.

Gilmore (LABOR GAIN 2.6%; 3.3% swing to Labor): One of the few seats that went to Labor’s this was Labor’s eighteenth biggest swing nationally, and the fifth biggest in a seat that can’t be described as inner urban. The primary vote for Labor’s Fiona Phillips was actually down 3.0%, as seven candidates took the field compared with four in 2016 – among whom was spurned Liberal independent Grant Schultz, who came in fifth with 7.0%. Katrina Hodgkinson failed to light up the scoreboard as Nationals candidate, scoring 12.5%. The drop in the Liberal vote exceeded this, so that the combined Coalition primary vote was down 3.6%, similar to Labor. That Labor nonetheless enjoyed a solid and decisive two-party swing suggests a reasonable share of Nationals votes leaked to them as preferences.

Eden-Monaro (Labor 0.8%; 2.1% swing to Liberal): Eden-Monaro’s fame as the bellwether seat was further buried as Mike Kelly held off a swing of 2.1% to hold on by 0.8%. The Nationals might have done better to have stayed out, polling only 7.0% and contributing to a 4.3% drop in the Liberal primary vote. Labor was down 2.7%, the Greens up 1.2%. There was maybe a slight tendency for Labor to hold up better in urbanised areas, but no clear geographic pattern overall.

New England (Nationals 17.6%; 1.2% swing to Nationals): Barnaby Joyce’s remarkably strong result at the November 2017 by-election was proved to be no fluke, as he gained in 2.5% on the primary and 1.2% on Coalition-versus-Labor two-party in the face of even greater adversity this time. The former accomplishment was no doubt assisted by the absence of Tony Windsor, who polled 29.2% in 2016, although another independent, Adam Blakester, polled 14.2% this time to take second place over Labor, landing 14.4% short after preferences.

Calare (Nationals 13.3%; 1.5% swing to Nationals): The only seat Shooters Fishers and Farmers contested in New South Wales after their state election triumph in March, they managed third place with 17.4% of the primary vote. Nationals member Andrew Gee, a sophomore, was down 2.9% to 44.7%, and Labor was down 4.9% to 22.1%.

Riverina (Nationals 19.5%; 3.0% swing to Nationals): The only seat in the country where the United Australia Party broke double figures, to which it owes a small field of four candidates that didn’t include a Liberal, leaving Palmer’s outfit as the only non-left alternative to the Nationals. Nationals leader Michael McCormack gained 2.7% on the primary and 3.0% on two-party.

Farrer (Liberal 10.9% versus Independent): Kevin Mack was one of a number of highly regarded independents who struck out on the night, managing 20.5% of the primary vote – not nearly enough to disturb Liberal incumbent Sussan Ley, who despite shedding 7.2% on the primary vote still ended up with a straight majority of 50.7%. Ley won by 10.9% after preferences, and suffered a 0.7% two-party swing against Labor.

Parkes (Nationals 16.9%; 1.8% swing to Nationals): Both major parties were well down on the primary vote, incumbent Mark Coulton shedding 7.9%, in the face of solid performances by the Liberal Democrats (8.1%, another example of the no-Liberal-candidate effect), independent Will Landers (7.2%) and the United Australia Party (an above-average 6.3%).

343 comments on “Call of the board: regional New South Wales”