More seat polls, more indications that the Nationals in particular have a battle on their hands.

NOTE: The main discussion thread is the post beneath this one, dealing with the 54-46 federal Newspoll result.

The Daily Telegraph has another two YouGov Galaxy seat polls today, from Lismore and Barwon, that conform with an emerging narrative of trouble for the Nationals. The report does not say when the polls were conducted, but the sample sizes were 588 in Lismore and 502 in Barwon.

• The headline from Lismore is that Labor leads 51-49, but this is based on a respondent-allocated preference flow that is much better for the Nationals than they enjoyed in 2015. This can be gleaned from the fact that the Nationals primary vote is at 35%, compared with 42.5% in 2015, whereas Labor (28%, compared with 26.4%) and the Greens (27%, compared with 25.6%) are little changed. Broadly speaking, this suggests a repeat of 2015, when the Greens narrowly outpolled Labor to take second place. This runs against the general sentiment, which says the Greens are unlikely to repeat their coup in winning Ballina and coming close in Lismore, as the issue of coal seam gas extraction has lost its currency. 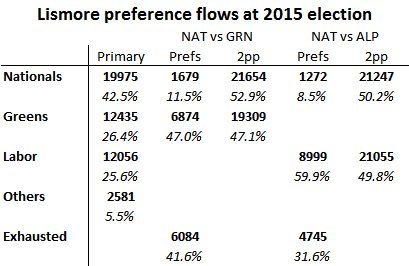 • In Barwon, where Kevin Humphries is retiring and the water management is biting as an issue, the Nationals are credited with a lead of just 51-49 over Shooters Fishers and Farmers. Nationals candidate Andrew Schier is on 40%, down from Humphries’ 49.1% in 2015, while Shooters candidate Roy Butler is on 30% – beyond that, we are told only that Labor and the Greens are down, from 24.0% and 6.2% respectively. In this case, the respondent-allocated two-party result looks about right.

• A report by Deborah Snow in the Sydney Morning Herald adds Myall Lakes, a Mid North Coast seat with a margin of 8.7%, as another addition to the seats along the state’s northern coast where Labor fancy themselves a chance of unseating the Nationals. Other examples were canvassed in this blog post, and in my article from Crikey (paywalled) on Friday.

• A dust-up played out last week in the seat of Port Stephens, which the Liberals harbour hopes of gaining from Labor, after Facebook suspended fake accounts that had been used to post comments critical of Labor member Kate Washington. The Liberals accuse Washington of misusing the electoral roll in her efforts to ascertain the Facebook posters’ identities, and have lodged a complaint to that effect with the Electoral Commission. They insist candidate Jaimie Abbott’s hands are clean in the matter, and that the blame lies with a volunteer on her campaign, Tasman Brown, who is also a staffer to upper house MP Catherine Cusack. Abbott’s own Facebook account was also been suspended, but this may have been collateral damage arising from Brown’s administrator privileges over the account.

• The Sydney Morning Herald continues to drip out results from its uComms/ReachTEL poll, today reporting that “the economic outlook, including falling house prices” had 35% saying they were more likely to vote Coalition, 40% less likely and 24% no difference.