An electoral overview of today’s New Zealand election, which would appear to be a highly competitive race between a three-term conservative government and a resurgent Labour Party.

New Zealand goes to the polls today to decide whether to grant a fourth term to the conservative National Party, which won elections under the leadership of John Key in 2008, 2011 and 2014. The party fell just short of winning parliamentary majorities in its own right in 2011 and 2014, through which time it has had confidence and supply agreements with three very small parties: the Maori Party, which has had two seats since the 2014 election, and ACT New Zealand and United Future, who have had one apiece. With Key’s resignation at the end of last year, the prime ministership passed to Bill English, who had an earlier stint as party leader in opposition from 2001 and 2003, leading the party to defeat as Helen Clark’s Labour government was elected to its second term in 2002. Both Clark’s government and the National administration that preceded it lasted three three-year terms, so the country will be following its usual pattern if Labour is elected today.

Since 1996, New Zealand’s elections have been held under the mixed-member proportional electoral system, a model developed in Germany, which is helpfully holding its own national election this weekend (see the post immediately below this one). New Zealand’s reform was apparently the only example known to history of a country replacing a single-member majoritarian system with a proportional representation system, or vice-versa. Under MMP, voters elect both a local constituency member and cast a second vote to determine the party’s overall seat shares. To the extent that the outcomes for the 71 constituency seats don’t do the job, 49 “list” members are elected from the parties’ tickets to produce an overall seat total in proportion to the party vote result. Where a party wins more constituency seats than its share of the party vote would entitle it to, the result is an “overhang” in which the total number of seats exceeds the minimum of 120. There have typically been overhangs of one or two seats owing to constituency seats being won by minor parties with fractional shares of the national party vote.

Complicating the picture somewhat is a 5% threshold that a party with no constituency seats must clear to be eligible for its share of party list seats. This means that a party’s share of seats reflects not its share of the overall number of votes cast, but its share of votes cast for those parties who were eligible for representation. In 2011, 3.4% of votes were cast for parties that failed to make the cut; in 2014, it was 6.2%. This meant the National Party’s respective vote shares of 47.3% and 47.0% were very nearly in enough to get them over the line to parliamentary majorities in their own right, resulting in 59 seats out of 121 on the first occasion and 60 seats on the second. The share of the vote excluded from the calculation could increase quite markedly if the Green Party fails to clear the 5% threshold, as some polls have suggested they may. The party has had a tough year, with one of its two co-leaders resigning over personal scandals that also prompted two of her colleagues to resign from the parliamentary party.

The other notable complication is that the constituency seats are divided into 64 general and seven Maori electorates, with voters identifying as one or the other for purposes of electoral enrolment. The success of the Maori Party in these seats was fertile ground for overhangs at its peak around a decade ago, when it won four of the seven Maori seats in 2005 and five in 2008. However, its fortunes declined following a party split in 2011, and it only won one of the seven seats in 2014, the other six going to Labour in one of the few bright spots for the party amid an otherwise poor result.

The following is a crude poll trend measure based on the public polling results from the past term aggregated at Wikipedia (National in blue, Labour in red, Green in green, New Zealand First in tan): 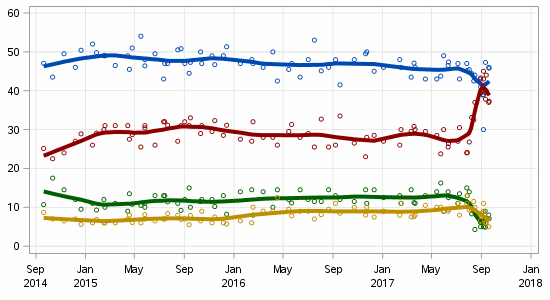 What is abundantly clear is that Labour has undergone a dramatic surge since Jacinda Ardern replaced Andrew Little as leader on August 1. Beyond that, however, the campaign polls have been all over the shop so far as the relative standing of National and Labour is concerned. One poll series, Newshub-Reid Research, has persisted in recording commanding leads for National, most recently of 45.8% to 37.3%. This has been corroborated by the most recent One News-Colmar Brunton poll, which has it at 46% to 37%. Most polls conducted from the end of August through the first fortnight of September had Labour ahead, but the overall impression is that National’s position has since improved. My own gut feeling, based on Ardern’s media buzz and the normal behaviour of the electoral cycle, is that this is flattering National, but I can’t pretend this is based on a particularly deep understanding of the New Zealand political scene.

It’s certainly clear that whoever governs will require the support of minor parties, and here too the picture is hard to read. The Green Party won 10.7% of the vote and 14 seats in 2014, which it surely will not match this time. A lot may depend on whether it clears the 5% threshold, in which case it will win a minimum of six seats. If it doesn’t, those six seats will instead go to other parties, with no more than two or three going to Labour. The other big minor party is Winston Peters’ New Zealand First, which scored 8.7% and 11 seats in 2014, which Peters managed to increase to 12 when he successfully contested a National-held seat at a by-election in 2015. The party had a poll surge in July and August but has since suffered from the surge to Labour, with recent indications being that the party stands to go backwards.

The other three minor parties with parliamentary representation, who each provide National with parliamentary support, each owe their presence to success in constituency seats. That appears unlikely to continue in the case of United Future, has has held on precariously at the last few elections owing to party leader Peter Dunne’s narrow victories in his outer Wellington seat of Ōhāriu. He is now bowing out, partly in recognition of the fact that he was unlikely to retain the seat. It’s a different story for ACT New Zealand, whose member David Seymour has a lock on the Auckland electorate of Epsom with the tacit acceptance of the National Party. The Maori Party won only a single constituency seat in 2014, but its 1.3% party vote was enough to entitle it to a second seat. To repeat that performance, Te Ururoa Flavell will have to retain his seat of Waiariki – the one local poll suggests he will.

For what it’s worth, my best guess it that the Green Party will stay in the game; that Labour will outperform the late polls, though perhaps not by enough to make it to power with the Green Party alone; and that New Zealand First will emerge as the kingmaker. Should the National Party remain in government, it will require the support of the mercurial Peters and his party, a situation it has been very happy to have avoided throughout its time in office.