If you’ll pardon me for being a day late with this one, The Australian has published the regular quarterly breakdowns of voting intention by state, age and gender (voting intention here, leadership ratings here), which suggest swings against the Coalition of 2% in South Australia, 3% in New South Wales and Victoria, 6% in Queensland and just shy of 8% in Western Australia. The demographic breakdowns are interesting in showing particularly strong movement against the Coalition among the older age cohort (down 10% on the primary vote, compared with 7% overall) and those outside the capital cities (down 9%, compared with around half that in the capitals). The polling was drawn from all of Newspoll’s surveying through February and March, with an overall sample of 6943.

Late as usual, below is BludgerTrack updated with last week’s Newspoll and Essential Research. The state breakdowns in BludgerTrack are a little compromised at the moment in using a straight average of all polling since the election to determine each state’s deviation from the total, and is thus understating the recent movement against the Coalition in Western Australia. As of the next BludgerTrack update, which will be an expanded version featuring primary votes for each state, trend measures will be used. 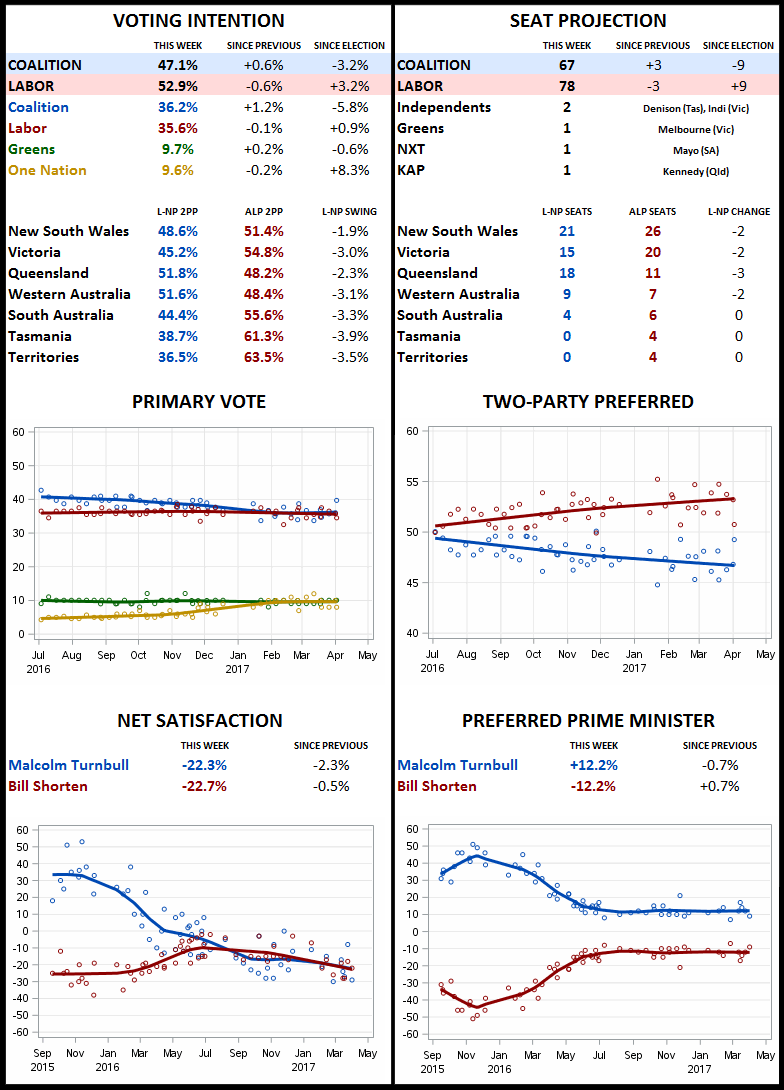 Stay tuned for today's Essential Research results, with which this post will be updated early afternoon some time.

UPDATE (Essential Research): Absolutely on change in this week’s reading of the Essential Research fortnight rolling average, with Labor leading 53-47 on two-party preferred, the Coalition leading 37% to 36% on the primary vote, the Greens on 10% and One Nation on 8%.

The poll includes Essential’s monthly leadership ratings, which have both leaders improving on last month – Malcolm Turnbull is up two on approval to 35% and down three on disapproval to 47%, and Bill Shorten is up three to 33% and down three to 46% – while Turnbull’s lead as preferred prime minister nudges from 38-26 to 39-28.

The government’s business tax cuts get the thumbs down, with 31% approving and 50% disapproving; only 20% believing the cut should extend to bigger businesses, with 60% deeming otherwise; and 57% thinking bigger business profits the more likely outcome of the cuts, compared with 26% for employing more workers.

On the question of whether various listed items were “getting better or worse for you and your family”, housing affordability, cost of electricity and gas and “the quality of political representation” emerged as the worst of a bad bunch.