The Track is back, as Essential Research moves a point in favour of the Coalition.

The only new poll this week was the usual fortnightly rolling average result from Essential Research, which moved a point in favour of the Coalition on two-party preferrred, leaving Labor’s lead at 51-49. On the primary vote, the Coalition was up one to 40%, Labor steady on 36%, the Greens down one to 8%, Pauline Hanson’s One Nation steady at 6% and the Nick Xenophon Team steady at 3%. However, the big news so far as this post is concerned is the post-election return of BludgerTrack, which opens its account with 17 data points to work from – three from Newspoll, and 14 from Essential Research. 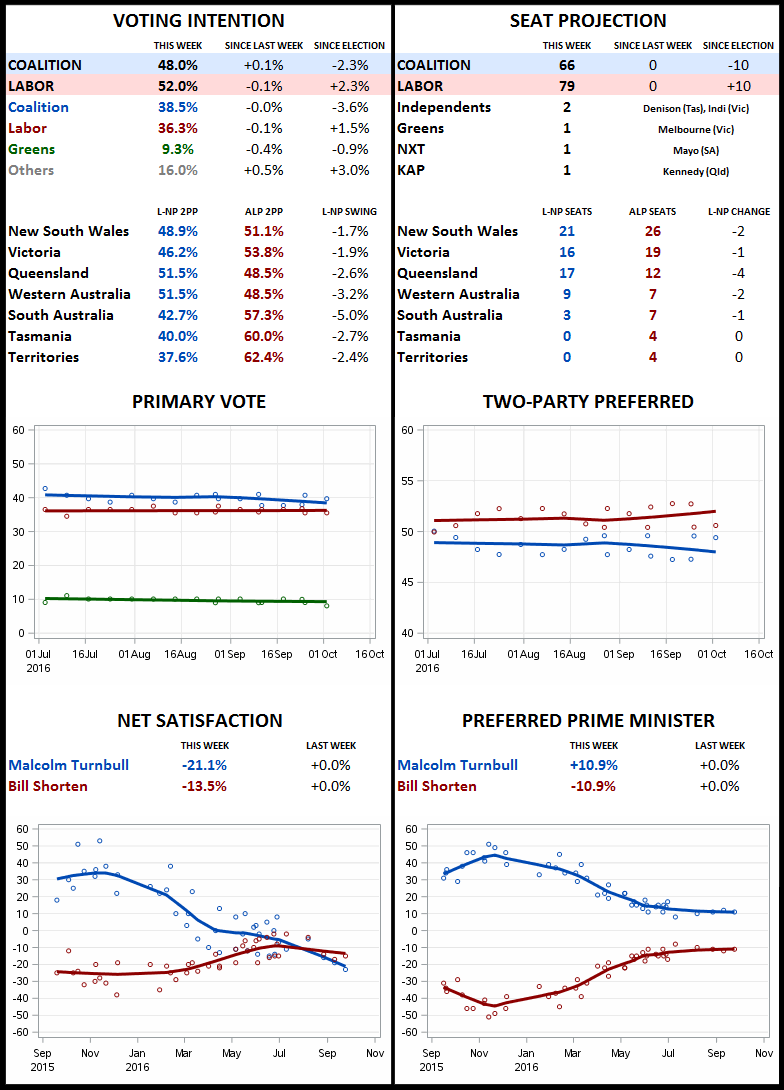 Each pollster is bias-adjusted based on the difference between the election result and a trend measure of their voting intention numbers at that time, with the results halved to account for the likelihood that they will tweak their methodology rather than persist in their existing errors. On this basis, the adjustments for Newspoll are +0.0% for the Coalition, 0.2% for Labor and +0.0% for the Greens, while those for Essential Research are respectively -0.7%, +0.5% and -0.1%. For the time being, results are being weighted according to a formula that gives each pollster equal weight over the full course of the present term, so that the more prolific a pollster is, the less weight its polls will be given. On this basis, the weighting for a single Essential poll is currently 0.071, while a Newspoll gets one-third.

This means the dominant data point so far as the current reading is concerned is last week’s Newspoll, which was published as 52-48 to Labor, but came out at 52.7-47.3 after 2016 election preferences were applied to the bias-adjusted primary vote. This is why the current BludgerTrack reading is a little more favourable to Labor than you might expect, given the run of recent polling. Preferences are allocated according to the results of the July election, there presently being no other option, but I will eventually move to a method that splits the difference between previous election preferences and a trend measure of respondent-allocated preferences, if and when Ispos and ReachTEL provide enough such data to make it worthwhile. Such an approach would have been almost perfectly accurate at the recent election, although the previous election method has generally performed better in the past. The leadership results go back to the start of Malcolm Turnbull’s prime ministership in mid-September last year – note that no change is recorded in the “last week” column at this point, owing to the lack of new results this week.

• After numerous polls finding the public favouring a referendum to solve the same-sex marriage question, a follow-up result from last week’s Newspoll found 48% favouring a “politicians decide&148; options versus 39% for a plebiscite in February. This week’s Essential Research gave respondents an option between “the government should agree to a vote in parliament” and “the Labor Party, Greens and Xenophon Team should agree to a plebiscite”, with respective results of 53% and 24%.

• Both pollsters also asked how they would vote in a referendum, with Newspoll finding 62% to 32% in favour of yes, and Essential coming in at 58% to 28%. Essential also found 49% believed such a vote should be binding on parliament, with 26% preferring the alternative option of leaving parliamentarians with a free vote.

• Essential posed a series of questions on the National Broadband Network, which found 42% favouring “the Labor plan” and 27% “the Liberal government’s plan”; only 22% saying the NBN would “adequately meet Australia’s future Internet requirements”, with 47% saying it wouldn’t; and 88% agreeing the internet was “becoming an essential service”, with only 7% disagreeing.

• Fifty per cent rated the level of immigration to Australia over the past 10 years as too high, 12% as too low and 28% as about right, while 44% opposed the recently announced increase in the annual refugee intake, with 39% supportive. Relatedly, Essential recently released widely publicised results on Muslim immigration and Pauline Hanson from its survey of July 27 to August 1. This found 49% supporting a ban on Muslim immigration versus 40% opposed, and strong majorities supporting the propositions that Hanson was “speaking for a lot of ordinary Australians” (62% to 30%) and “talks about issues other politicians too scared to tackle” (65% to 28%).