Newspoll breakdowns offer more evidence of a bruising swing against the Coalition in Western Australia, and a desertion of voters from both major parties in South Australia.

UPDATE (Roy Morgan): The latest fortnightly result from Roy Morgan has the Coalition up a point to 37.5%, Labor down half to 32.5%, the Greens down 2.5% to 13% and the Nick Xenophon Team steady at 5%, and otherwise remains remarkable for the size of the non-major party vote. The headline respondent-allocated two-party measure has Labor leading 51-49, down from 52.5 last time, but the shift on previous election preferences is more modest, from 52-48 to 51.5-48.5. The poll release also informs us that the Nick Xenophon Team was recorded at 26.5% in South Australia, ahead of Labor on 25%, with the Liberals on 31%. The poll was conducted over the past two weekends from a sample of 3099.

The Australian today brings us state breakdowns aggregated from the last four Newspoll surveys going back to the start of April, pointing to two-party swings of around 3% in New South Wales and Victoria, 6% in Queensland and 7% in Western Australia, but no swing at all in South Australia – albeit that the picture there is almost certainly confused by a Nick Xenophon Team-fuelled 34% for “others”. I have taken the opportunity to put together one of my occasional detailed state breakdowns inclusive of the Newspoll numbers, together with the various other published and unpublished state-level polling available to me. The key point of interest so far as the primary vote is concerned is the others vote in South Australia, which is a little more modest than Newspoll at 22.8%, but has risen quite dramatically since the start of the year. For charts to go with the following tables, see here. 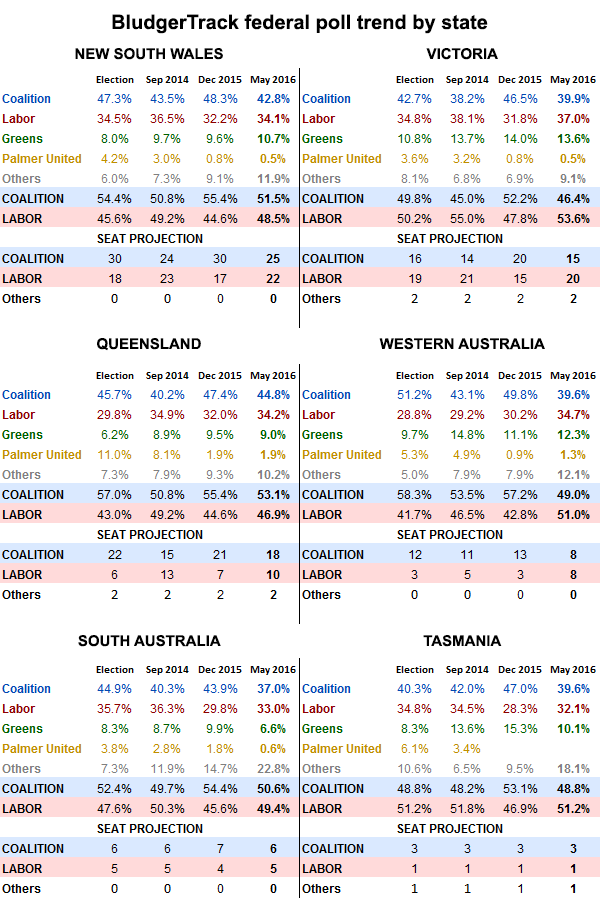 1,361 comments on “Newspoll and BludgerTrack broken down”