Almost three weeks into the campaign, the Coalition parties in New South Wales are still yet to finalise the order of their Senate ticket, while Labor finds itself with a situation vacant in the Northern Territory.

I’ve finally gotten around to updating BludgerTrack with the leadership ratings from Monday’s Newspoll, so the finalised weekly reading of that can be found at the bottom of the post. As well as that, a small number of campaign news snippets to relate:

• The Coalition parties in New South Wales are still yet to resolve the order of their Senate ticket, which is proving problematic with respect to the balance between the Liberals and the Nationals, and competing Liberal factions. Liberal incumbents needing to be accommodated are Connie Fierravanti-Wells, Marise Payne and Arthur Sinodinos, and they are joined by Nationals Senators Fiona Nash and John Williams of the Nationals, for whom inter-party arrangements appear to have secured the second and fifth spot respectively. However, the Centre Right faction of the Liberal Party is also very keen to find a place for newcomer Hollie Hughes, who won top position for the half-Senate ticket at a preselection vote in March, before agreeing to a swap with second-placed Fierravanti-Wells, a member of the hard Right. With a full ticket now required for a double dissolution, Hughes and Fierravanti-Wells are battling for fourth place, with the loser set to be relegated to sixth, with first and third set to go to Payne and Sinodinos. Joe Aston of the Financial Review today reports that Hughes is likely to miss out, with both Malcolm Turnbull and Scott Morrison pushing for Fierravanti-Wells, despite Morrison’s factional alignment with Hughes. However, Sarah Martin of The Australian reported earlier this week that the situation was up in the air because moderates were split between competing desires to honour their alliance with the Centre Right by favouring Hughes, or support the leadership by favouring Fierravanti-Wells. The matter is being determined through a ballot of the party’s state executive conducted by email, the result of which is expected at any tick of the clock.

• The Northern Territory News reports that two candidates have formally declared for the preselection to replace Nova Peris as Labor’s Senate candidate in the Northern Territory: Malarndirri McCarthy, a former ABC journalist and member of the Northern Territory parliament from 2005 to 2012, and Kon Vatksalis, president of the Northern Territory Leukaemia Foundation and a member of the territory parliament from 2001 to 2014. Also considering there options are Marion Scrymgour, a former Deputy Chief Minister and member from 2001 and 2012, and Ursula Raymond, Peris’s chief-of-staff. Fleur Anderson of the Financial Review noted that Scrymgour was “regarded as an unpredictable candidate” because she had sat as an independent for a period in 2009 following a disagreement over government policy concerning remote communities. Katskalis presumably starts from a disadvantage in that all other candidates are indigenous women. The matter will be determined by the party’s chief executive.

• After lingering rather too long on its starting odds of $1.35 for Labor and $3 for the Greens, Sportsbet is now offering $1.50 on the Greens and $2.50 on Labor in David Feeney’s seat of Batman. 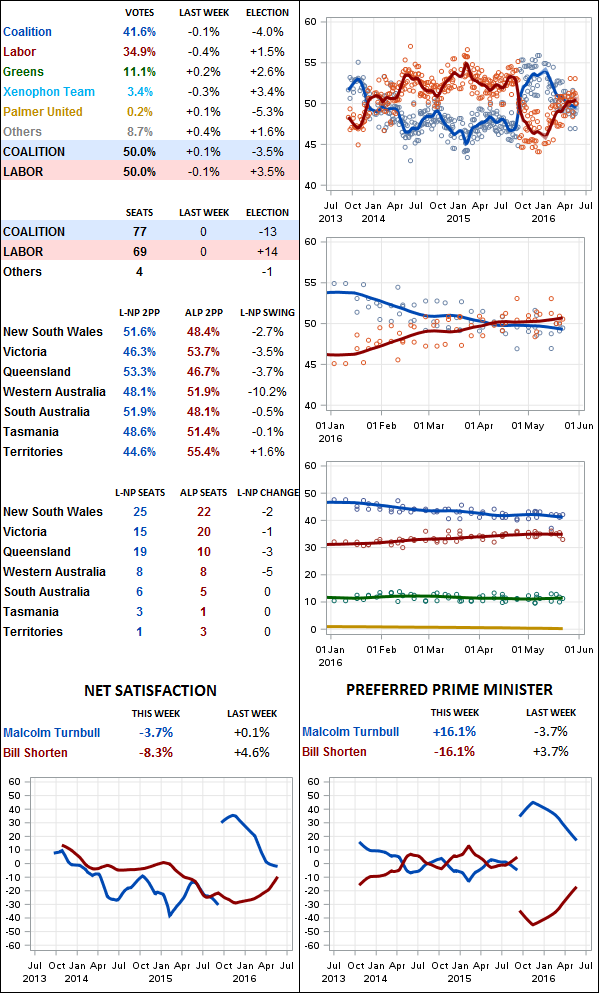 611 comments on “Election minus five weeks and one day”