Essential Research corroborates Newspoll in recording Labor retaining its 51-49 lead, but there’s nothing in it so far as the BludgerTrack poll aggregate is concerned.

The addition of Newspoll and yesterday’s Essential Research result to BludgerTrack leave nothing between the two parties to the first decimal place. Observers of BludgerTrack’s form will know that actually translates into a small Coalition majority on the seat projection, which has the Coalition up one on the seat projection in New South Wales and down one in Queensland. I haven’t updated it with Newspoll’s leadership ratings yet, but will get around to doing so tomorrow. I haven’t yet covered the Essential Research result, which was once again unchanged in having Labor leading 51-49 on two-party preferred. On the primary vote, both parties were down a point – the Coalition to 41%, Labor to 37% – while the Greens and Nick Xenophon Team steady on 9% and 3%. 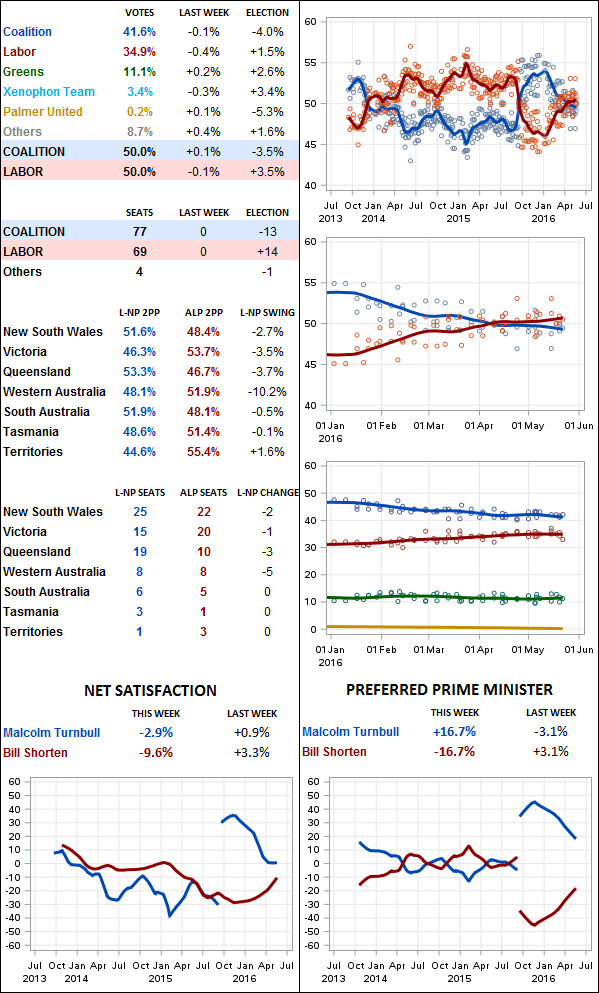 The Australian has also been treating us to a series of supplementary results from the weekend Newspoll over the past few days that echo the further questions posed by Essential Research this week, to wit:

• The latest in Essential’s occasional series on leadership attributes finds Malcolm Turnbull deteriorating between five and seven points over the past three weeks on “out of touch”, “arrogant” and “understands the problems facing Australia”, without suffering much change with respect to capacities such as “intelligent” and “good in a crisis” (although “hard-working” is down five). Bill Shorten’s numbers are little changed, leaving him rated lower than Turnbull on most attributes, with the singular exception of being out of touch with ordinary people, which is the largest point of difference between the two. Similarly, The Australian today has Turnbull ahead on a series of measures, but with Shorten leading on “cares for people” and “in touch with voters”, while Turnbull has lost all but two points of a ten-point lead on “understands the major issues” from February.

• There has been a whole bunch of “best party to handle” results in the past few days. Amid an overall predictable set of results, Essential Research finds Labor increasing leads from 4% to 11% on health, 6% to 13% on protecting local jobs and industries, and 4% to 10% on housing affordability, the latter of which has only recently emerged as an area of Labor advantage. The Seven Network last night had further results from Friday’s ReachTEL poll showing the Coalition favoured 55-45 on economic management, Labor favoured 61-39 on health. Newspoll framed the questions in terms of the leaders rather than the parties, and had Malcolm Turnbull favoured 55-29 over Bill Shorten on the economy, 48-25 on asylum seekers and 43-38 on the cost of living, 46-33 on tax reform, 50-27 on interest rates and 42-38 on unemployment, while Shorten led 47-40 on health, 47-41 on education and 41-36 on climate change.

• When it asked if respondents expected Labor to keep or change the government’s asylum seeker policies, Essential Research found 28% opting for keep, 38% for change, and 34% for don’t know.

• As recorded in the chart below, the three betting agencies have been consistent in offering odds on the Coalition to form government that imply a probability of between 70% and 80%, although the one most immediately responsive to the actions of punters, Betfair, seems to have recorded a bit of a dip over the past few days. 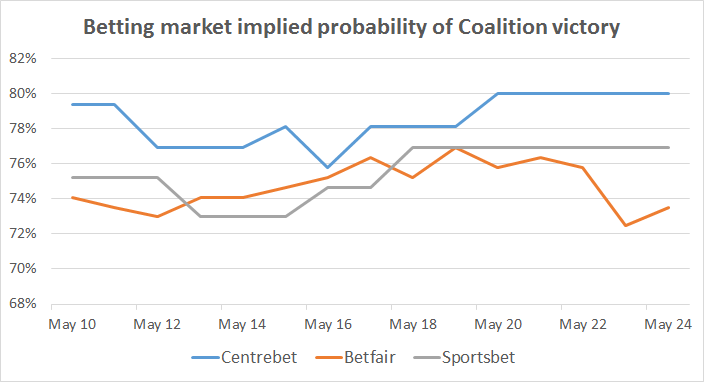 • In further horse race news, Phillip Coorey of the Financial Review reports Labor is having trouble landing the swing where it needs it, with Labor margins that were cut fine in western Sydney over the past two elections set to blow out again. Coorey had earlier reported one Liberal strategist saying the election was “genuinely close, but at this stage, the retention of the government is more likely”, while a Labor counterpart concedes they were behind, but concluded: “We haven’t put our cue in the rack.”

• Labor is scrambling for a new Senate candidate in the Northern Territory after Nova Peris today confirmed she would not be seeking re-election, with widespread reports she is to take up the position of senior adviser for indigenous and multicultural affairs with the Australian Football League. Trish Crossin, whom Julia Gillard forced out of the seat to make way for Peris at the 2013 election, told ABC Radio yesterday that Peris had presented Labor with a “selfish distraction”, and called on Gillard to admit she made a mistake. There are as yet no indications as to who Labor might preselect to replace her.

• Both major parties have now lost their first choice candidates for the seat of Fremantle, after Sherry Sufi resigned as Liberal candidate, after local newspaper the Fremantle Herald reported he had been recorded in 2013 doing an unflattering and profanity-laden impersonation of his then boss, state Mount Lawley MP Michael Sutherland. There had been news reports in the preceding days about articles Sufi had written in opposition to same-sex marriage and an apology to the stolen generations, which had actually been in the public domain for some time, and rather technical allegations he had provided an inaccurate account of his employment record on his candidate nomination form. The Liberals have rushed to endorse previously unsuccessful preselection candidate Pierette Kelly, an electorate officer to Senator Chris Back.

• Pauline Hanson’s prospects for a Senate seat is the topic of the hour, having been canvassed by me in Crikey last week, Jamie Walker in The Australian on Saturday and a Courier-Mail front page yesterday. Antony Green told ABC Radio’s World Today program yesterday had “some realistic chance”. Kevin Bonham is a little more skeptical, but doesn’t rule it out.

• Phillip Hudson of The Australian reported on Monday that Labor is seeking to exploit talk of a preference deal between the Liberals and the Greens in Victoria to shore up working class support in two low-income regional seats: Bass in northern Tasmania, and Dawson in northern Queensland.

• Matthew Denholm of The Australian reports that Jacqui Lambie is advocating that her voters give their second preference to the Nick Xenophon Team, and put Labor ahead of the Liberals.