Labor pokes its nose ahead on two-party preferred in the latest reading of the BludgerTrack poll aggregate, but a stronger showing in Queensland finds the Coalition keeping its head above water on the seat projection.

The flurry of national polling conducted after the budget for release at the onset of the official campaign has been followed this week by a lull in new results at national level, but with Galaxy and ReachTEL making sizeable entries in state-level federal polling from Queensland and Tasmania respectively. The only national results were the regularly weekly Essential Research and the first campaign poll from Roy Morgan, the latter of which was strong enough for Labor that they have moved back into the two-party lead by the barest possible margin. However, the strong showing for the Coalition in the Galaxy Queensland poll causes them to register 1.2% higher this week in that acutely sensitive state, translating into two extra seats to partly cancel out losses of one each in New South Wales, Victoria and Western Australia. Essential Research has provided new numbers for leadership ratings this week, and these seem to suggest Malcolm Turnbull’s slump is levelling off.

Some of you will no doubt be looking askance at that swing currently projected in Western Australia, and I don’t blame you. There are seven data points in the model from the past three weeks with a combined sample of 1048, which individually have the Coalition’s primary vote in the state ranging from 35% to 44%, compared with 51.2% at the 2013 election. However, I suspect that if you look back in a week or two, you will find the projection moderating somewhat. It’s also worth observing that the model is now crediting Palmer United with all of 0.1% of the national vote. The only pollsters who are still tracking the party are Ipsos and Morgan, with both ReachTEL and Essential having swapped them in their questionnaire for the Nick Xenophon Team. The last five data points for Palmer United are all 0%, and the previous ten were evenly divided between 0% and 1%. 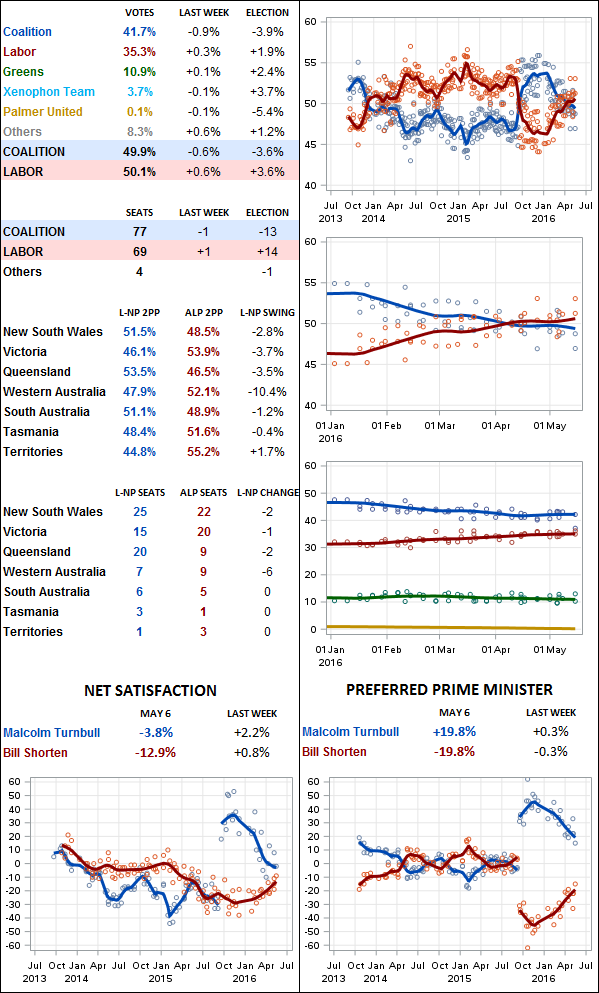 • The Advertiser reported yesterday that a privately conducted ReachTEL poll had produced an encouraging result for Matt Williams, Liberal member for the marginal Adelaide seat of Hindmarsh. Williams was credited with 41% of the primary vote, compared with 25% for Labor candidate Steve Georganas, whom Williams unseated in 2013, 14% for Nick Xenophon Team candidate Daniel Kirk, 8% for the Greens, and 7% undecided.

• Nick Xenophon told the ABC’s Lateline his party’s strongest lower house prospect, Mayo candidate Rebekha Sharkie, was polling in the twenties. How formidable that makes her would depend entirely on how much of it was gouged from the vote for Liberal member Jamie Briggs, who recorded 53.8% of the primary vote in 2013.

• Labor has hit trouble in a sensitive spot in the inner Melbourne seat of Batman, after it emerged that David Feeney had failed to declare a negatively geared $2.3 million property in Northcote on the register of members interests. The news media is now applying the blowtorch to other aspects of the real estate portfolio of Feeney and his wife, and bringing unwelcome attention to his once close association with controversial ex-Health Services Union identity Kathy Jackson. Feeney is under pressure in Batman from Greens candidate Alex Bhathal, who outpolled Liberal candidates in her previous runs for the seat in 2010 and 2013, respectively finishing 7.9% and 10.6% behind Labor at the final count.

• A week after Labor dumped its candidate in the seat, there have been headlines about the contentious views of Sherry Sufi, the Liberal candidate for the Western Australian seat of Fremantle. Sufi’s conservative positions on matters such as same-sex marriage and the stolen generations apology had been well known, but Malcolm Turnbull contrived to make an issue out of them when he visited the electorate on Monday to spruik a local shipyard’s contract to build naval patrol boards, and neglected to invite his candidate. There have also been questions raised about the accuracy of Sufi’s employment record as presented on his candidate nomination form. Also absent during Turnbull’s shipyard visit was Premier Colin Barnett, whose leadership is increasingly coming under pressure amid deterioriating opinion polling.