As the government gears up to reverse its polling fortunes on the back of last night’s budget, a look at post-budget polling effects going back to the dawn of Newspoll.

Leroy Lynch offers a reminder of a long lost Possum Comitatus post from budget time 2007, designed to address suggestions from certain elements of the media at that time that Peter Costello’s last budget (as it transpired) would finally kick off that long-awaited “narrowing” in Labor’s poll lead under Kevin Rudd. No evidence was found of consistent behaviour in polling at around budget time, but it strikes me that this matter is better considered on a case-by-case basis. So here’s a chart I’ve done showing how governments’ two-party poll ratings changed between a period from one month before each budget to one and two months after, based on trend measures of polling from the time (just Newspoll up the 2010 election, but BludgerTrack results thereafter). Many if not most of the big changes probably had little if anything to do with the budget (the Kevin Rudd leadership coup bounce in 2013, the carbon tax backlash in 2011, the unwinding of Kevin Rudd’s post-election honeymoon in 2008), but others (1993 and 2014 especially) very clearly did. Labor budgets are indicated in pink, Coalition ones in blue. 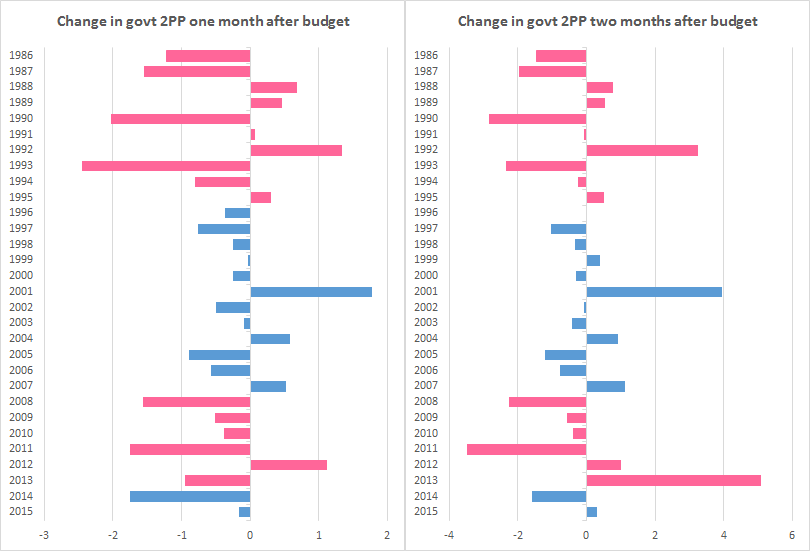 732 comments on “Federal budget: the morning after”