A favourable reaction to the budget yields no benefit to the Coalition on voting intention, according to the latest Newspoll.

The Australian reports Labor has retained its 51-49 lead in the post-budget poll, from primary votes of Coalition 41% (unchanged), Labor 36% (down two), Greens 12% (up two) and One Nation 2% (down one). Scott Morrison is down a point on approval to 58% and up one on disapproval to 38%, while Anthony Albanese is respectively down one to 39% and up three to 46%, which equals his worst ever net rating from Newspoll. Morrison’s lead as preferred prime minister is little changed at 55-30, compared with 56-30 last time.

Regarding the budget, the poll found 44% of respondents expecting it would be good for the economy compared with 15% for bad. On the question of the its personal impact, the better off and worse off responses both scored 19%, with a strikingly high 62% unable to say. There was presumably also a question on whether the opposition would have done a better job, as per Newspoll’s long-established practice — I’ll add that and any further detail as it becomes available.

UPDATE: The poll was conducted Thursday to Sunday from a sample of 1506. No result yet for the “would the opposition have done better” question, probably because The Australian is saving it for tomorrow. Out of 34 post-budget Newspolls going back to 1988, this is the eighth best result for impact on personal finances and the sixth best for impact on the economy.

The chart below plots the one series against the other, with the present result shown in red. This is near the trendline, suggesting no particular tendency for the budget’s economic impact to be seen as more positive (as tended to be the case in the Howard goverment’s early budgets) than the personal impact (which rated higher in the last three budgets), relative to the favourable reception for the budget overall. 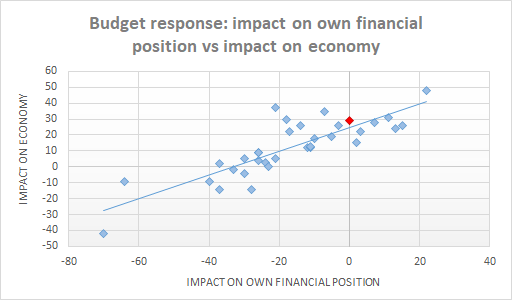 The best received budgets mostly came during the golden age of government revenue from 2004 to 2008: the best of all, on both personal and economic impact, was the one that preceded the Howard government’s defeat in 2007.