The Melbourne coronavirus takes its toll on the standing of the Andrews government, and a small amount of gloss comes off Scott Morrison’s still-impressive ratings.

The Guardian reports that Essential Research, which a fortnight ago published its first coronavirus-free poll since January, has naturally revived its interest in the subject. The poll finds 36% of respondents rating themselves very concerned about the virus, up from 25% when the question was last asked three weeks ago. The state breakdowns have it at 46% in Victoria, though New South Wales isn’t far behind at 42%.

The poll also finds approval of the federal government’s handling of the matter down from 70% when the question as last asked three weeks ago to 64%, while small sample breakdowns concerning state governments’ responses have the Victorian government’s favourable rating slumping from 65% to 49%. Below are charts recording the progress of these results since the pollster first asked the question in relation to the federal government in March and the state governments in April, although at this stage I only have “good” and not “poor” ratings from the latest poll. Keep in mind that the sample sizes for the Victorian results is only around 275. 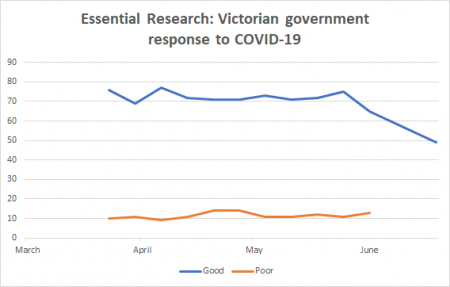 The poll also features the pollster’s monthly (actually a bit longer than that on occasion, the previous result having been from May 28-31) leadership ratings, which find Scott Morrison down two on approval to 63% and up one on disapproval to 27%, while Anthony Albanese is up one to 44% and down two to 28%. The latter numbers are rather a lot different from Newspoll, whose poll a fortnight ago had Albanese on 42% for both approval and disapproval. Morrison holds a lead of 50-27 lead as preferred prime minister, narrowing from 53-23 last time.

The BludgerTrack aggregates have been updated with these numbers. Essential Research should publish the full report for the poll later today.

UPDATE: Full report here. The federal government’s poor rating on COVID-19 is up four to 16%, while the Victorian government’s has doubled to 26%.

1,482 comments on “Essential Research: leadership ratings and the return of coronavirus”