Yet more intricate detail on the May federal election result – this time from South Australia, where normality was restored after the Nick Xenophon interruption of 2016.

Welcome to another instalment of the now nearly complete Call of the Board series, a seat-by-seat review of the result of the May federal election. Now is the turn of South Australia, previous instalments having dealt with Sydney (here and here), regional New South Wales, Melbourne, regional Victoria, south-east Queensland, regional Queensland and Western Australia.

So far as the two-party swing was concerned, South Australia was largely a microcosm of the national result, with the Coalition picking up a swing of 1.6% (compared with 1.2% nationally) and no seats changing hands. Similarly, Labor did particularly badly in the regions, suffering big swings in Barker and Grey, compared with a highly consistent pattern of small swings in the metropolitan area. Labor won the statewide two-party preferred vote, as they have done at four out of the past five elections, albeit by a modest margin of 50.7-49.3.

As in previous recent instalments, I offer the following image with colour coding of swings at booth level. Compared with other metropolitan capitals, the divide between Labor swings in inner urban areas and Liberal swings further afield is somewhat less clear here, although the Labor swings are a fairly good proxy for general affluence. This would be even more apparent if the map extended further afield to encompass the Adelaide Hills areas covered by Mayo, where, as noted below, the tide seems to be running against the Liberals, and not just in comparison with Rebekha Sharkie. 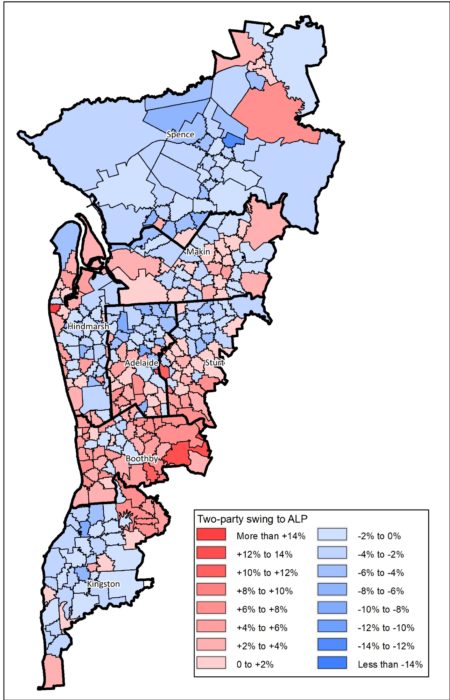 On the primary vote, comparisons with 2016 are complicated by the Nick Xenophon factor. The Nick Xenophon Team scored 21.3% statewide in 2016, but its Centre Alliance successor fielded candidates only in the non-metropolitan seats of Mayo, Barker and Grey. Rebekha Sharkie was comfortably re-elected in Mayo, but the party’s vote was slashed in Barker and Grey. Primary votes elsewhere followed similar patterns – to save myself repetition in the seat-by-seat account below, the Xenophon absence left between 16.7% and 20.0% up for grabs in Kingston, Makin, Spence and Sturt, which resulted in primary vote gains of 5.1% to 6.2% for the Liberals, 5.2% to 6.6% for Labor and 2.6% to 3.9% for the Greens.

The other factor worth noting in preliminaries is a redistribution that resulted in the abolition of a seat, part of a trend that has reduced the state’s representation from 13 to 10 since 1990. This caused Port Adelaide to be rolled into Hindmarsh, creating one safe Labor seat out of what were formerly one safe Labor and one marginal seat. The eastern parts of Port Adelaide and Hindmarsh were transferred to Adelaide, setting the seal on a seat that has grown increasingly strong for Labor since the Howard years, while the Glenelg end of Hindmarsh went to Boothby, without changing its complexion as a marginal Liberal seat.

The table below compares two-party results with corresponding totals I have derived from Senate ballot papers, the idea being that this gives some sort of idea as to how results may have been affected by candidate and incumbency factors (two-party results for Labor are shown). This shows a clear pattern of Labor doing better in the House than the Senate in the seats than they hold, whereas there is little distinction in Liberal-held seats. My guess would be that there is a general tendency for Labor to score better in the House and the Senate overall, which is boosted further by sitting member effects in Labor-held seats, while being cancelled out by those in Liberal-held seats. Taking that into account, it would seem Labor’s sitting member advantages were relatively weak in Adelaide and Hindmarsh, which stands to reason given the disturbance of the redistribution. 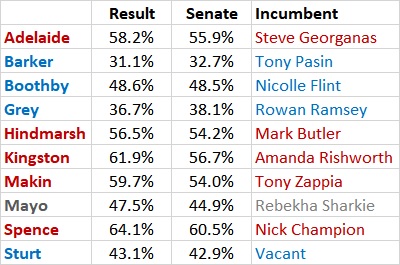 On with the show:

Adelaide (Labor 8.2%; 0.1% swing to Liberal): The Liberal swing in this now safe Labor seat was below the statewide par despite the disappearance of Kate Ellis’s personal vote. In this it reflected the national inner urban trend, and also the long term form of a seat that has drifted from the Liberals’ reach since Ellis gained it in 2004. However, a divide was evident between a Liberal swing at the northern end and a Labor swing in the south, for reasons not immediately obvious. It may be thought to reflect the demographic character of the respective Enfield and Unley ends of the seat, but this doesn’t explain why the Liberals gained in Prospect immediatley north of the city, an area that would seem to refect the inner urban mould. Nor was there any particularly evident effect from the redistribution, which added to the west of the electorate parts of Hindmarsh, formerly held by Adelaide’s new member, Steve Georganas. The Centre Alliance registered a relatively weak 13.7% here in 2016 – the Greens did particularly well in their absence, lifting from 10.0% to 15.7%, although they are still a long way off being competitive.

Barker (Liberal 18.9%; 5.1% swing to Liberal): The Barossa Valley swung to Labor, but the rest of this seat followed the script of regional Australia in going strongly enough to the Liberals to substantially increase Tony Pasin’s already safe margin. A majority of the Centre Alliance collapse (from 27.6% to 2.9%) ended up with the Coalition, although the United Australia Party recorded an above average 5.9%, while the Labor primary vote made a weak gain of 4.7%.

Boothby (Liberal 1.4%; 1.3% swing to Labor): Labor once again failed to realise hopes of reeling in this southern Adelaide seat, despite it reflecting the national trend of affluent suburbia in recording a 1.3% Labor swing that overwhelmed whatever sophomore advantage may have accrued to Liberal member Nicolle Flint. The absence of the Centre Alliance left 18.5% of the vote up for grabs, and the Liberal, Labor and Greens primary votes were respectively up 3.5%, 7.7% and 3.8%.

Grey (Liberal 13.3%; 5.6% swing to Liberal): Another big regional swing to the Liberals, in this case to the advantage of Rowan Ramsey, who came within 2% of losing to the Nick Xenophon Team’s Andrea Broadfoot in 2016. Broadfoot ran again for the Centre Alliance this time and was down from 27.7% to 5.1%, of which a fair bit was accounted for by the entry of One Nation and the United Australia Party, a further fair bit went to the Liberals, while the Labor primary vote hardly budged.

Hindmarsh (Labor 6.5%; 1.9% swing to Liberal): The Liberals recorded a swing perfectly in line with the statewide result in a seat that is effectively a merger of the safe Labor seat of Port Adelaide, whose member Mark Butler now takes the reins in Hindmarsh, and what was previously the highly marginal seat of Hindmarsh, which extended into more Liberal-friendly territory further to the south. The income effect took on a very particular manifestation here in that the booths along the coast swung to Labor while those further inland tended to go the other way. With the Nick Xenophon Team taking its 17.0% vote into retirement, each of the main parties made roughly comparable gains on the primary vote.

Kingston (Labor 11.9%; 1.6% swing to Liberal): For the most part, this once marginal but now safe Labor seat followed the national outer urban trend in swinging to the Liberals, though not be nearly enough to cause serious concern for Labor member Amanda Rishworth. However, separate consideration is demanded of the northern end of the electorate, which is notably more affluent, particularly in comparison with the central part around Morphett Vale. This northern end consists of two parts separated by the Happy Valley Reservoir — the coast at Hallett Cove, and Flagstaff Hill further inland, the latter gained in the redistribution. For whatever reason, the former area behaved as did the rest of the electorate, whereas the latter swung to Labor.

Makin (Labor 9.7%; 1.1% swing to Liberal): So far as the electorate in aggregate is concerned, everything just noted about Kingston equally applies to Makin, which remains secure for Labor member Tony Zappia. There was perhaps a slight tendency for the more affluent parts of the electorate (in the north-east around Golden Grove) to do better for Labor than the low income parts, but not much.

Mayo (Centre Alliance 5.1%; 2.2% swing to Centre Alliance): As the Nick Xenophon/Centre Alliance vote tanked elsewhere, Rebekha Sharkie had no trouble repeating her feat of the 2016 election, when she unseated Liberal member Jamie Briggs, and the July 2018 Section 44 by-election, when she accounted for the now twice-unsuccessful Liberal candidate, Georgina Downer. Downer trod water on the primary vote this time, but nonetheless won the primary vote as Labor recovered market share from Sharkie after a particularly poor showing at the by-election. Sharkie’s winning margin of 5.1% was slightly down on her 7.5% by-election win. The Sharkie factor obscured what may be an ongoing trend to Labor in the seat, with Downer winning the Liberal-versus-Labor vote by a very modest 2.5%. This partly reflected a 2% shift in the redistribution, but there was also a 0.7% swing to Labor that bucked the statewide trend.

Spence (Labor 14.1%; 3.0% swing to Liberal): As well as changing its name from Wakefield, the redistribution removed the rural territory that formerly leavened the Labor margin in a seat that now encompasses Adelaide’s low-rent north, up to and including Gawler. For those with a long enough memory, it more resembles the long lost seat of Bonython, a Labor stronghold through a history from 1955 to 2004, than Wakefield, which was a safe Liberal seat until Bonython’s abolition drew it into the suburbs. Consistent with the national trend of low-income and outer urban seats, Labor member Nick Champion emerged with a dent in his still considerable margin.

Sturt (Liberal 6.9%; 1.5% swing to Liberal): In the seat vacated upon Christopher Pyne’s retirement, swing results neatly reflected the distribution of income, favouring Labor at the northern end and Liberal in the south. Whatever the impact of the loss of Pyne’s personal vote, it didn’t stop Liberal debutante James Stevens scoring a primary vote majority and 1.5% two-party swing.

498 comments on “Call of the board: South Australia”