With counting set to drag into a second week, Labor remains on the precipice of majority government.

Hetty Johnston has conceded defeat in Macalister, which would seem to remove the final obstacle to Labor’s 47 seats, with Townsville still outstanding. Only a handful of votes were added to the count there today, but there is talk in comments that Labor scrutineers believe they have a lead of over 100 votes.

A second batch of absents in Townsville has been better for the LNP than the first, breaking 244-240 to Labor rather than 520-428. Since my projection of these votes had been based on the behaviour of the first batch, this eliminates the gain I was projecting Labor to make on late counting, such that my projected final outcome is no different from my estimate of the two-party preferred result. I’m still projecting a little more than 1000 votes to come, but this is based on patterns from 2015 that may not repeat this time. So the only thing to be said about this is that it’s right down to the wire, as far as I can tell. The correctness of my assumption relies on preferences from votes counted after the ECQ turned off two-party counts on Tuesday (of which there have been 3103) behaving the same as those from before (of which there were 24,981). The two groups of votes behaved almost identically on the primary vote, so there is no obvious reason to think that they won’t.

Elsewhere, it’s the same story as before, with everything depending on preference distributions that we can’t yet see. It’s looking hopeless for Labor in Maiwar, with a 51-vote deficit against the Greens set to be compounded by independent preferences. The shortfall Hetty Johnston needs to cover on preferences in Macalister continues to widen slowly, now at 3.5%, although that would have to be about it. 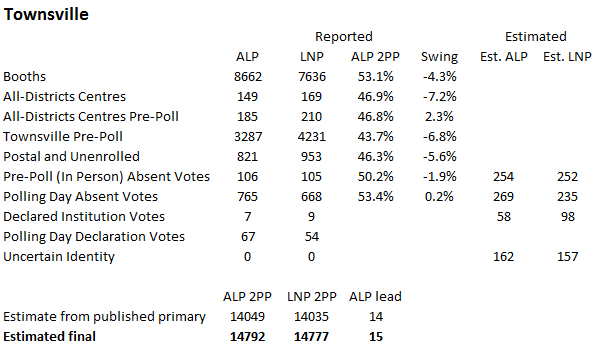 With a week’s worth of counting completed, there is still a wide zone of uncertainty surrounding the Queensland election result that will linger until Tuesday. In the race to 47, Labor appears to start on an assured 45 (subject to a few qualifications noted at the bottom of the post), or 46 if you include Rockhampton like everyone else is doing. It seems more likely than not that Macalister will put them on the top, and the chance of an extra layer of icing was increased by today’s counting in Townsville. The LNP starts on 39, can make that 40 if they make it Townsville, and then 41 if they don’t lose Hinchinbrook to Katter’s Australian Party, which remains an unknown quantity.

In Townsville, 990 absent votes have been added, which I’m taking to be about half the total based on there being 1829 of them at the 2015 election. I had been projecting these to break 51.5-48.5 to the LNP, but my two-party estimate actually has them going 54.9-45.1 to Labor. With 423 various other types of vote added to the count over the past few days breaking almost evenly, my two-party estimate has Labor all of five votes in front. I’m projecting that to grow to 75 – but, this is based on the assumption that the outstanding absent votes will behave the same way as those that have already reported, and absent votes characteristically vary significantly between different batches as they come in from different areas. My projection: 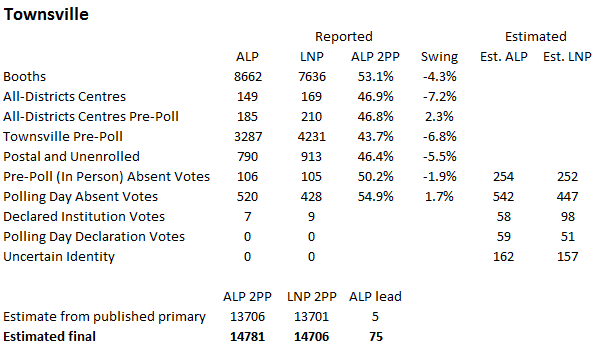 In Maiwar, various types of non-ordinary vote were added to the count haven’t changed the situation: the Greens lead by four, and stand to gain 150 to 200 when the independent’s preferences are distributed. With less than 1000 votes likely still to come, Labor’s only hope would seem to be an error turning up.

There can only be a handful of votes left in Macalister, and the situation is basically unchanged, with the LNP leading Hetty Johnston by 3.4% in the race for second, and Johnston needing the 13.5% to be distributed as preferences to close the gap, in which case she will beat Labor on LNP preferences. Johnston herself says it’s more likely than not she won’t make it, but no one seems to know for sure.

Finally, a piece in Inside Story by former Age journalist Tim Colebatch identified a few possibilities for One Nation boilovers that others have overlooked or discounted. One was Thuringowa, where One Nation could win if LNP and Katter’s preferences are particularly tight, although I suspect Colebatch is overlooking the fact that LNP had One Nation last on preferences here. The other was Rockhampton, in the event that Labor fails to get a solid flow of Margaret Strelow’s preferences (though Strelow herself seems to be well informed about the count, and hasn’t mentioned this as a possibility.