A detailed look at the demographic changes recorded in this week’s census release, as they pertain to the House of Representatives electorates.

This post elaborates on my paywalled article in Crikey based on this week’s release of data from the census, which looked at its implications for parliamentary representation, and the changes it records in the existing 150 electorate’s demographics since the previous census in 2012.

To deal with the first, calculations conducted by the Parliamentary Library make very clear that when the official determination is made at the end of August, the Australian Capital Territory will be found to have nudged over the 2.5 quota threshold and thus be entitled to a third seat, as had briefly been the case between 1996 and 1998; South Australia will lose a seat for the third time since the expansion of parliament in 1984, reducing it to 10; and Victoria will gain a thirty-eight seat, restoring it to its position before it last lost a seat in 1996, though not to the 39 seats it had from 1984 to 1990.

The first of these points is unambiguously good news for Labor, who are assured of winning three seats in the ACT regardless of how they are drawn. The loss of a seat in the strong Labor state of South Australia might be presumed to have the opposite effect, but the facts on the ground may suggest otherwise. In a state whose seats divide six Labor and five non-Labor (including Mayo, a normally Liberal seat won last year by the Nick Xenophon Team), the four most below-quota electorates are all non-Labor. However, a lot depends on the particular strategy pursued by the redistribution commission, which is difficult to second guess.

It would seem the thing to do in Victoria would be to create a new electorate in Melbourne’s outer north, where rapid development has caused McEwen to go massively over quota. This might have the effect of creating a new Labor seat while greatly improving the Liberals’ prospects in a more rurally oriented McEwen, which Labor now holds by a 7.8% margin after a 7.7% swing last year.

The second matter at hand concerns the changing demographics of the federal electorates, on which I have skimmed the surface of what the census has to offer by evaluating each electorate’s population, median age, median family income and proportion of non-English speakers. The following tables list the top and bottom ranked electorates on the last three of these four measures.

Some further observations about them in turn, illustrated with maps in the case of Sydney and Melbourne.

Growth has been slow in South Australia (5.0%) and especially in Tasmania (2.9%), but occupied a narrow band of 8.1% to 10.7% in the other states, with the Australian Capital Territory at the top of the league with 11.3%. Within the states, the long established pattern of growing cities and stagnant regions persists. Melbourne’s growth has extended to its satellite electorates, as far afield as Corangamite, Bendigo and McMillan, but otherwise only three genuinely regional electorates have recorded above average growth: Forrest, in the South West region of Western Australia; Hume, which creeps into the south-western outskirts of Sydney; and the northern Hunter region seat of Paterson, which I wouldn’t have picked.

In Sydney, growth has been slow in the Liberal-voting coastal electorates, brisk in the inner north, and solid in the outer suburban growth electorates of Greenway, Werriwa and Macarthur. The electorates bearing the names of Sydney, Melbourne and Brisbane have recorded strong to spectacular growth, but in Melbourne and Brisbane the growth has otherwise been concentrated on the metropolitan fringes. Perth’s growth has likewise been concentrated in new outer suburbs, while in South Australia the only above-average result was for Wakefield on the northern edge of Adelaide. The northern Canberra electorate of Fenner has absorbed a lot of new voters, whose arrival has also had the effect of pushing down median income. 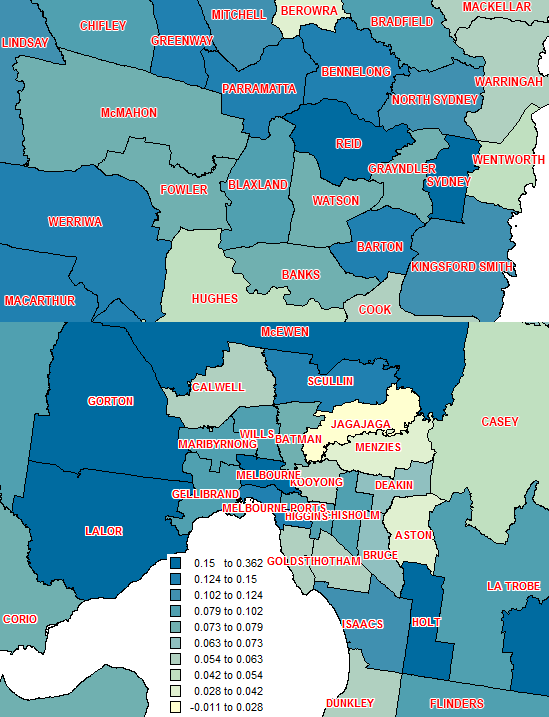 At state level, the outstanding fact is that income growth (recorded here as median family income) has been slowest in Queensland and especially Western Australia. As noted in my Crikey article, the outstanding geographic patterns factors are the weak results in central Queensland and Perth’s eastern and south-eastern suburbs (see map below). Also of note was strong growth in the Murray Darling Basin electorates of New South Wales, Victoria and South Australia, which is presumably due to seasonal anomalies at the time of one or other census. Otherwise, the picture is patchy and trends difficult to discern. Growth in Wills might be taken as gentrification in action, but other examples of it are hard to identify. 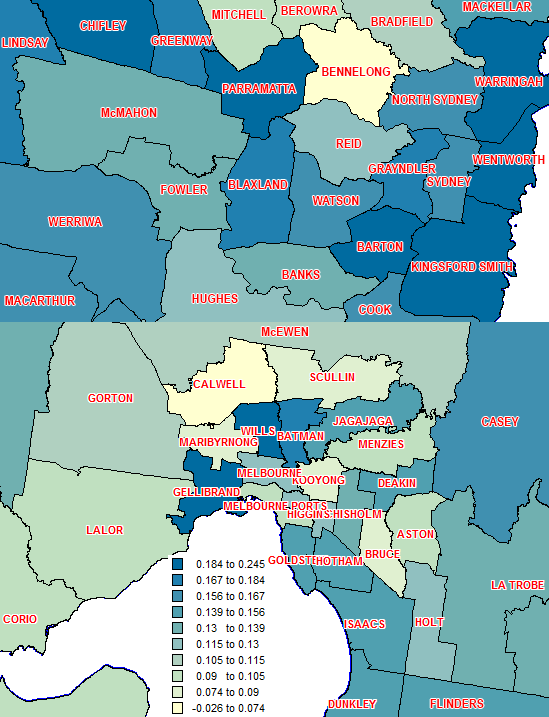 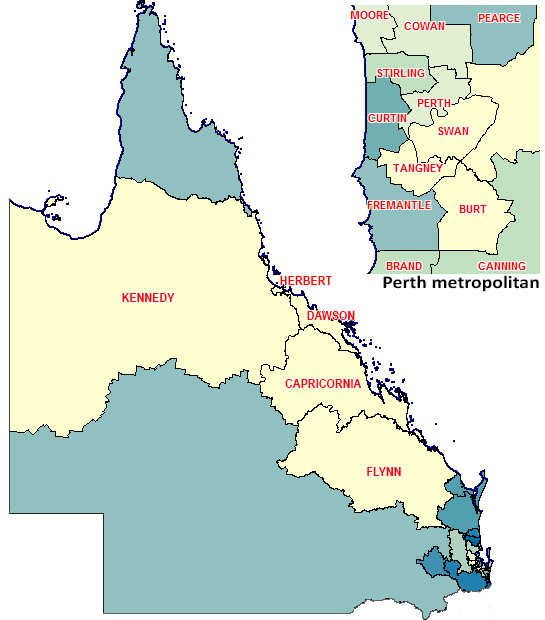 Tasmania continues to get greyer, being the only state or territory to add two to its median age, which gets published as a blunt round figure. Queensland, South Australia and the two territories are both up one, with the other states unchanged. The long established pattern of the regions getting older has continued unabated. Those parts of inner Sydney that have grown, as detailed above, have also become younger, but Sydney uniquely has no electorate on its fringe where the median age has appreciably lowered. Examples elsewhere are McEwen in Victoria, Blair and Ryan in Queensland, Pearce in WA, Wakefield in SA, Fenner in the ACT. 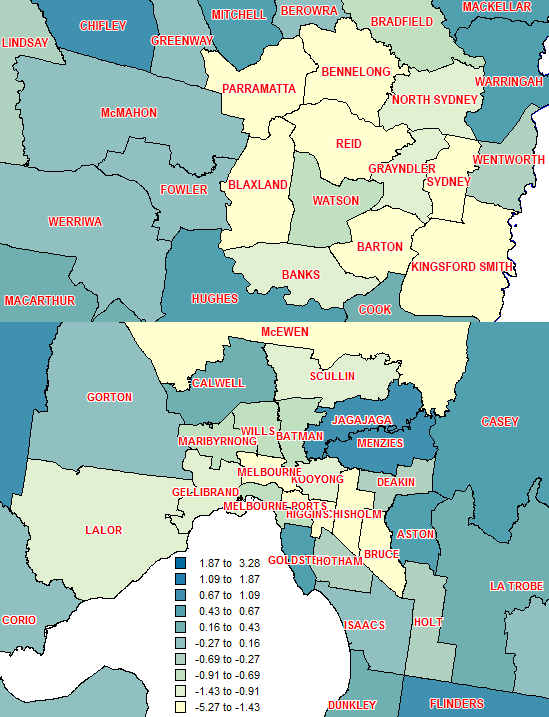 Another long-established trend is of the cities acquiring growing proportions of non-English speakers, to which the regions present a stark contrast. This pattern is as strong as ever on the latest numbers, but there are interesting exceptions in the areas of inner Sydney and Melbourne where the Greens do well: Batman, Wills and Gellibrand in Melbourne, and Grayndler and Watson in Sydney. The Perth seats noted above as recording slow income growth also have the biggest growth in ethnic diversity. 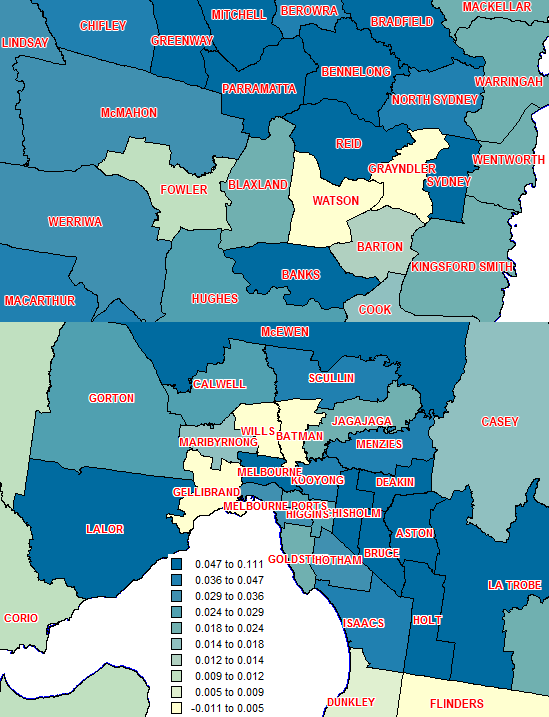